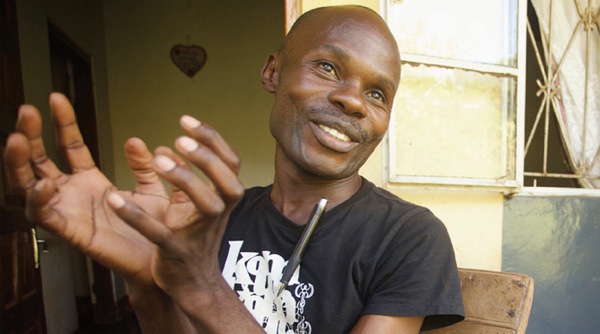 David Kato in Call Me Kuchu

Katherine Fairfax Wright and Malika Zouhali-Worrall’s Call Me Kuchu is an unbelievable documentary. I mean unbelievable in both senses. The film’s topic, the dire situation for gay and transgender people in Uganda — with a government threatening to make homosexuality punishable by death (and “abetting,” i.e. not reporting it, subject to jail time) and public figures openly calling for gay genocide — is almost inconceivable. At the same time, the filmmakers’ access to essential material, and the unusual grace with which they handle it, is hard to believe.

I spoke to Zouhali-Worrall and Wright via Skype about the film and their process. After meeting at a friend’s birthday party, the two found a common interest and started to plan a collaboration. Says Zouhali-Worrall, “We were basically researching LGBT stories outside of the global North, largely because we felt that the main stories we were seeing were around marriage equality, and we kind of figured out that the main challenges and obstacles were probably a lot more extreme than that in the global South.” This led them to the story of LGBT persecution in Uganda.

“Malika has a more journalistic background and did a lot of the research, I had more of a film background and had all the equipment and stuff,” says Wright. “From there, Malika continued in that vein and took on all the producing tasks, I shot and edited, and somewhere in between we both directed.”

The film follows a handful of LGBT activists, notably middle-aged gay man David Kato, as they struggle for their rights and dignity in this violently homophobic society. Needless to say, these subjects are brave beyond anything someone from our society can even comprehend, and their personal stories are incredibly poignant. Bishop Christopher Senyonjo, who provides a safe space for the community (and is disbarred for his efforts), is another inspiring figure.

The filmmakers also give screen time to some of the more prominent anti-gay voices in Uganda, letting them hang themselves with their own rope. Some of these people are so full of hate that they’re barely coherent. They even show up and protest, Westboro Baptist Church-style, at the funeral of a gay-bashing victim.

Then there’s Giles Muhame, the managing editor of Rolling Stone — a newspaper, unrelated to the American mag of the same name, that outed gay people (including their home addresses) and went on absurd campaigns like trying to blame them for Al-Queda terrorist attacks — who can barely contain his glee, giggling as he advocates the harassment and even murder of his fellow human beings. But perhaps the most sobering is David Bahati, a politician and prime mover behind the anti-gay law. Unlike the other homophobic activists, who often seem simply deranged, Bahati’s quiet and calm demeanour as he states his views is even more chilling.

According to Zouhali-Worrall, it was after this interview, early in the shoot, that the filmmakers decided to let the anti-gay voices speak for themselves. Arguing with Bahati, she recalls, “didn’t achieve anything in terms of what we needed for the film, and it certainly didn’t convince him. After a while, we realized that our personal emotions and responses weren’t necessarily that useful in the interview context. But it definitely involved shutting ourselves off to a certain extent.”

I’ve seen a lot of documentaries on important topics that have their heart in the right place, but that simply drop the ball on a purely cinematic level. That’s why it’s such a relief that Call Me Kuchu is so engaging not only in its topics, but also in its construction. Wright Zouhali-Worrall are truly talented filmmakers. The story they tell is brutal, but also incredibly moving and powerful. It’s a tough film, but highly recommended.

The doc has won awards around the world, including Best Documentary at the Image+Nation fest here in Montreal. While they’re flattered by the acclaim, Wright says that “now we’re heading into more of our outreach, educational and advocacy screenings, which are probably of even greater significance to Malika and I because that’s why we made this film to begin with.” ■

52,398 cases of COVID-19 have been reported across the province according to Santé Quebéc.