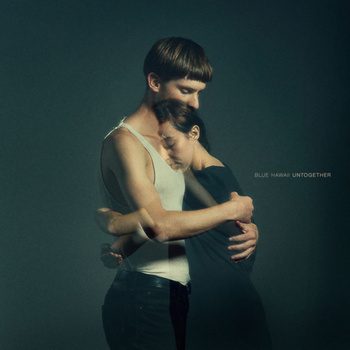 “So many times I wanted to throw this record away,” admits Raphaelle Standell-Preston, half of local duo Blue Hawaii. “I would feel really badly about myself and the music I was making. I didn’t have that confidence, but I’m really glad I finished it, that I was able to conduct that energy.”

Despite nearly being hauled off to the scrap heap, the delicate, humanized computer love of Untogether will ultimately see the light of day on March 5. Standell-Preston, who normally appears quite assertive when performing with her other band, Braids, explains that her lack of confidence was due to a change in the songwriting process.

“I feel like, with the music I’ve done before, I wanted it to be something specific,” she says. “With this recording, I just wanted to see where the song goes, to give the song its own voice rather than make it what I want it to be.”

“Instead of doing something more traditional, like sitting at a piano, having an idea and expressing it,” explains Ableton wiz Alex “Agor” Cowan, “we were producing, recording, composing and writing lyrics all at the same time, so it scattered the ideas. It’s part of the reason we chose that album title, but at the same time it allowed new sounds and structures to come out in unexpected ways.” One of the album’s more powerful numbers, “Try to Be,” was written in a more traditional manner.

Although most of the work was done in the same Little Italy apartment, the two bandmates made their contributions to Untogether separately, in alternating shifts. We discussed that, as well as making computer music sound human and long-distance relationships over a Monday morning Skype session.

Erik Leijon: Is it true Untogether was mostly done while apart? Where were you two?
Alex Cowan: We were often in the same apartment, just in different rooms. Then leading up to the recording process, Raphaelle was touring with Braids pretty much for a year straight, and I was living in Germany for a few months. We were in Europe together for a short while, but we were mostly scattered when we were conceiving it, and when it came time to write, we found it was easiest to go at it in shifts. So even if we were in the same city, we didn’t care to work on it together [laughs].

EL: Why was it easier?
Raphaelle Standell-Preston: Sometimes I find the more you talk about it, the more convoluted the ideas become and the more they lose their essence. Being able to show each other what we wanted was a lot more potent. I also find it a bit difficult being in a relationship, getting in a tiff over music, then having to eat dinner together. It lingers sometimes. Sometimes it’s better to get your space and do it yourself.

EL: So how was it divvied up?
RSP: We had a studio room and then we had a bedroom, so when one of us was in the studio, the other would be sleeping, because we’d do it at late hours. I’d come home from Braids and do it from 9 p.m. to 5 a.m., then usually I wouldn’t be able to do it the next night, so Agor would take the next shift. Untogether was made in the extreme hours of the night.

EL: Were either of you ever shocked by what the other was creating?
RSP: Sometimes the results were really great, other times I would wonder what he was thinking. We were able to go back to previous files; we always saved what we did under a new name.
AC: Yeah, it was always one or the other.

EL: When you’re singing, Raphaelle, are you thinking about how you can later alter your vocals?
RSP: It goes hand in hand. I’d sing a line and then immediately I’d hear different rhythmic elements I’d want to bring out. And cutting them up was the best way to get that robotic — well, not robotic, but more perfect sound.
AC: I was noticing near the end of the recording she would sing some of the parts and repeat the notes live, as if it were being cut and pasted — that was cool.
RSP: I was really into [American composer] Steve Reich at the time, and discovered through cutting up my vocals I was able to achieve that jagged, repetitive, orchestra-like effect.

EL: Did you want Untogether to sound less human?
AC: Not at all — I was interested in ways to make it more human. I’m a social person, and so much of what I do with music is in a live setting, so it’s strange that when I actually sit down to make music, it’s in front of a screen. I try to think of ways it can be brought out in a human way. The easiest way to do that is through dancing, with a solid beat. Everybody likes to dance.

EL: Any advice for those in long-distance relationships?
AC: You can’t be apart for too long. There exists a lot of technology that can keep us connected with each other, but that just fosters a new relationship that’s not a physical one. You can get to know this person in one sense, but by the time you see them again they may have changed a lot, and that can be painful and hard to deal with. Sometimes being apart is necessary and it can work out well, but I think for the most part if you’re needing to be in a different city than someone else, then that in itself might be a reason to not be with them.

EL: Are you two currently together?
RSP: Kind of — we are and we aren’t. We’re not living together right now, and we’ve decided to move out. We decided we needed personal growth. We still love each other a lot, but I’m going to be leaving on tour with Braids, and Agor wants to go back to Berlin and London again, so we’re supportive of each other. We’ve talked about how we’re much deeper than a relationship: it goes beyond boyfriend and girlfriend. Sometimes you have to do things for yourself and not focus on having to come home every night for dinner. We’re focusing on our art, and hanging out with friends.

EL: Is your relationship ever reflected in the music you make?
AC: No.
RSP: There’s more that goes on in the music, but sometimes I’ll sing about it. But it would be too much of a generalization to say that. ■

Blue Hawaii co-headline a double album launch with Doldrums and opener DJ Cadence Weapon, with a live set by Moonbahn, at the Plant (Google it) on Thursday, Feb. 28, 9 p.m., $5/$8