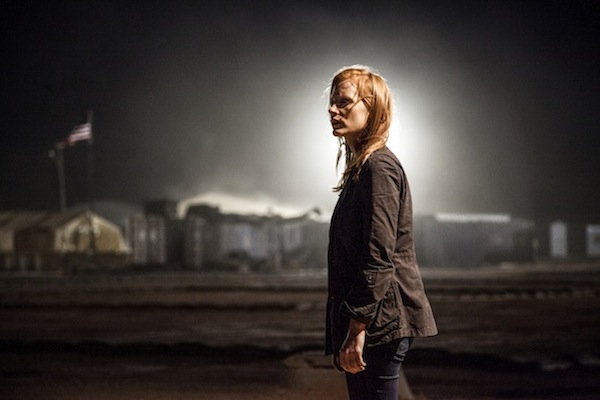 As someone who suffers from claustrophobia, I have a very hard time sitting through films that involve people being trapped in small places. And so when Dan (Jason Clarke), the macho, tough-talking CIA agent in the opening moments of Zero Dark Thirty — Kathryn Bigelow’s much-anticipated and now Oscar-nominated follow-up to her Best Picture-winning The Hurt Locker — unshackles the uncooperative Afghan detainee and places him in a box that just barely fits his now fetal-positioned body, I had to fight hard not to leave the theatre. In fact the whole introductory sequence, which runs about 20 minutes, is pretty hard to stomach or defend, focusing as it does on scenes of intense cruelty and humiliation.

New recruit Maya (Jessica Chastain) seems to find her colleague’s approach a bit hard to stomach as well — when I looked up at the screen during one particularly unpleasant episode, I saw that she too was looking away — but any sense (or hope) that she might bring some humanity to the situation is quickly put to rest when the prisoner’s pleas for mercy are met with her steely stare, and a disingenuous statement that only he is in control of what does or does not happen to him; the party line.

But Zero Dark Thirty is not about detainee torture. Although the film, which is rumoured to have been written with assistance from the CIA, does suggest that the torture of prisoners was essential in providing the first clue that led to the discovery of Osama Bin Laden’s secret fortress, and his death at the hands of the American Special Ops team, it is really more of a character study in the form of a police procedural that ends up as an action film. It’s a high-tension spy thriller about a single-minded young woman who cannot give up on the idea that Bin Laden is out there, and that it is her job to kill him. If you have an image of Carrie Mathison from Homeland in your mind, you’ve got things absolutely right.

On a cinematic level, this is an extremely engaging and artfully constructed film: the narrative is well-paced, the dialogue economical and sharp, the performances solid across the board, and the casting absolutely brilliant. Featuring several familiar faces from TV, often cleverly cast against type, the ensemble captures the nuances that distinguish the various members of the CIA’s hierarchy: the power-hungry bureaucrats, the socially awkward geniuses on the front line, the nerdy tech wizards in the operations room and the Tony Robbins-spouting cowboys who run the mission.

In the end, however, the film remains problematic. There is no partisanship here, no preachy tone or heavy-handed patriotic messages, and one has the sense that what drove the filmmakers — the film was directed by Bigelow, but written and produced by Mark Boal — was simply the story they set out to tell, and the desire to tell it in the most visually arresting and emotionally compelling way possible. In this, they undeniably succeeded. But in the end, though I couldn’t help but admire the filmmaking, the story’s celebration of real-life deadly violence left a bad taste that never quite went away. ■