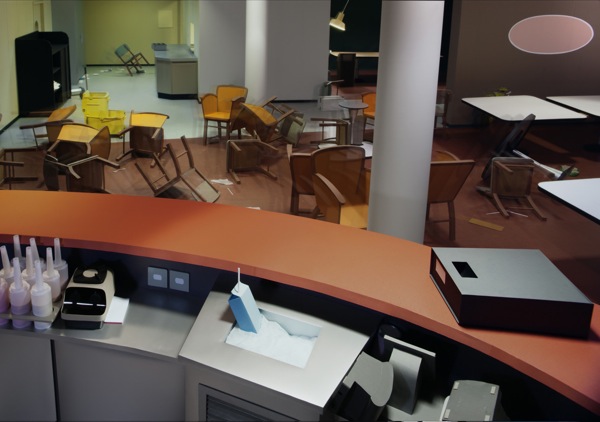 German photographer, sculptor and conceptual artist Thomas Demand is in town with Animations, a solo exhibit and installation at DHC Art made up mostly of Demand’s painstakingly created stop-motion animation loops. Curated by John Zeppetelli, this is the first show to feature only the artist’s animated work, an intriguing investigation into the unseen or unperceived, to the secret traces behind more profound events.

“Embassy,” the only component of the show that also includes static images, documents the entranceways to the Niger embassy in Rome. Seemingly innocuous — this tiny embassy for the world’s fourth-poorest nation is an apartment in a crappy building, not open to the public, existing solely to ensure the impoverished country’s easy access to the World Health Organization’s famine-relief offices — it became embroiled in heavy international geopolitics after a break-in, during which several blank documents were stolen.

Now, so far, this is the most boring anecdote of all time, but wait: then, 9/11 happened, and the lifted (and missing) papers were held up by the Bush administration as evidence to cast Niger as a “rogue state.” Bush & cie claimed that the documents proved that the small African state had sold uranium to Iraq to build the infamous non-existent Weapons of Mass Destruction (Niger has hella uranium), leveraging this to re-invade Hussein’s Iraq. American diplomat Joseph C. Wilson reported the fraud after further investigation of the missing papers, which led to the (completely illegal) outing of his wife Valerie Plame as an intelligence operative, which led to Scooter Libby’s fall from Republican grace… and so an unsuccessful break-in where nothing relevant was stolen fuelled major geo-political action and a series of self-reproducing scandals. Demand grew fascinated by this building, “which nobody had really been in,” and meticulously reproduced life-size paper sculptures of the office, calling it “the invisible, uncredited source of the last war.”

It is precisely these tensions, around invisibility and the past’s subtle thumbprint on the present, that drive Demand’s work. Another piece in this exhibit, “Recorder,” features a paper sculpture of a mid-’60s four-track recorder, which Demand says he created to trace “a connection between sound and image,” inspired in part by the lost Beach Boys Smile recordings. The video loop shows the paper recorder at work, alongside a tinny, sinister piano score cut into pieces. The artist explains that the video captures a very specific moment, in the mid-’60s when multi-track recording was innovated to create layers of tracks played together. Before this, a band would play in a studio, it was recorded, processed and released; with the introduction of multi-tracking, the drums, vocals and so on could be recorded on separate tracks and “bumped down” onto single tracks, enabling producers to create “artificial” recordings of auditory events that, strictly speaking, never happened.

One of the most striking animations from the exhibition is “Pacific Sun,” which shows the interior of a cruise ship during a violent storm, recreated from a YouTube clip. An unpopulated dining room on-board rocks and rolls with seven separate swells of waves, tossing the (paper reproductions of) furniture, service spaces and everyday life around the room. Again, Demand’s motivation is to display the invisible, what he calls “trying to recreate a wave by its impact on a material space.”

Demand began his career as a photographer and sculptor, creating a body of haunting, unpopulated images. In his present practices and in this exhibit, he recreates life-sized reproductions of physical spaces out of plain paper and cardboard stock, then films minute transitions in stop-motion, creating visual loops for projection in gallery spaces, then destroys the original sculptures. “Rather than documenting the world,” he says, “you create the world in front of a camera.”

The exhibit is compelling, a don’t-miss for the spring art season. Demand is in town, and will be participating in numerous talks, workshops and other events at DHC over the coming events, totally worth checking out for all those interested in the invisible truth behind images. ■