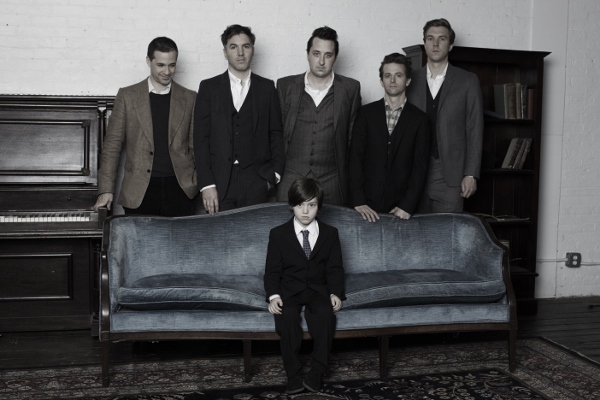 The Walkmen (Hamilton Leithauser’s on the far right) and friend

With band members split between NYC, Philadelphia and New Orleans, the Walkmen have assembled several times since June, supporting their seventh record (Heaven) with a lengthy stop-and-start tour that once again arrives in Montreal tonight.

They also spent part of last year playing anniversary shows, marking a decade since the release of their debut album, Everyone Who Pretended to Like Me Is Gone.

I reached singer Hamilton Leithauser by phone yesterday to discuss their decade of romantic indie rock, and always being on the wrong side of the seasons.

Lorraine Carpenter: So you’re back tomorrow.
Hamilton Leithauser: Yeah, we leave at the crack of dawn.

LC: It seems like you’re here a lot. Do you have a special relationship with the city?
HL: We do love the city, but I can’t say we ever felt like we really conquered the place. That tends to happen in the places we love, like New Orleans — we always play crappy bars there. They just don’t love us like we love them, I guess.

LC: Well, here, it could have something to do with anglo music being a harder sell to the French-speaking majority. So it looks like a city, but your demographic is more like a small town.
HL: I like that story; that sounds good. I can live with that.

LC: Not a lot of bands choose to tour the Northeast at this time of year.
HL: It’s unbelievable! We go to Miami in the summer and we go to Montreal in the winter. After 10 years, you’d think we would have learned, but no. Next we’re going to Colorado and Utah.

LC: You were here for last summer’s Osheaga, though. How do you feel about festival sets?
HL: Honestly, it’s not that fun to play for 45 minutes at two in the afternoon when it’s really hot and everybody looks so miserable out there. We’ve done that for so many years; we’ve always been the small band on the big stage, so we know that lunch slot very well. I think we might be the longest-running lunch-slot band out there.

LC: Not that your music doesn’t work during the day, but —
HL: It’s not a perfect fit, no. It’s an uphill battle. It’s really rare that you walk away from a festival and go, “God, that went over well.”

LC: This used to be a U.K./European thing, but there are tons of these festivals in North America now.
HL: Between Europe and the U.S., we did so many last year, it was incredible. We were just always at one of those things. They all blurred together.

LC: So were you all tanned by the end of the summer?
HL: Tanned? No, just burned red. We looked terrible.

LC: How about the anniversary shows — how did that go?
HL: We did that as a bit of a celebration. I thought it was a weird idea at first, but it actually turned out pretty good. It felt like a legitimizing moment for us.

LC: Did you play your first album front-to-back? Was it weird revisiting your earliest material?
HL: We played a lot of stuff, like almost everything we had, for three hours. It was fun. It felt like a party, but it was hard to do ’cause we played a lot of those shows. But it wasn’t like the songs felt that far away, like we were digging them out of the past.

Somebody told us that we’d been around for 10 years, and all of a sudden I realized that was true. It was one of those things where you look back and think, “Huh, that’s a hell of a long time.”