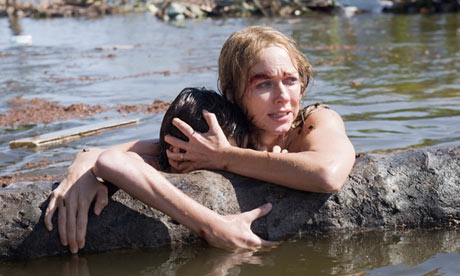 I’m wary of disaster films for committing the following crimes: being grotesquely budgeted, utterly implausible, over-acted, distorted by CGI and possibly the vehicle for a chart-topping Aerosmith ballad. So, kudos to director Juan Antonio Bayona (The Orphanage) for doing the impossible (yes, I went there): making an excellent disaster film that is not plagued by any of the aforementioned sins.

Even Bayona’s $45 million budget seems paltry, considering that the price tag for the preposterously named White House Down, which just wrapped shooting here in Montreal, hasn’t even been made public, but we do know that producers paid a shocking $3 million for the spec script. (For another point of comparison, Independence Day cost $75 million back in 1996.)

The Impossible tells the true story of a family of five (mother, father and three small sons) who survived the 2004 tsunami that devastated Southeast Asia. The particulars of their plight are so unbelievable that listing them would only make you cynical about the film’s plot. What I will reveal, though, is that Naomi Watts, just nominated for the Best Actress Oscar for her role as mother Maria, does an impeccable job of conveying hope, pain and unimaginable fear, without ever treading into the treacly, uncomfortable “heroic bravery” territory that one expects in a Hollywood disaster film hero(ine). For his part, Ewan McGregor also gives a pitch-perfect performance as the distraught father, unafraid to temper his optimism with genuine fear and vulnerability, even in front of his little boys.

Unexpectedly, the visual effects are excellent, as is the special effects makeup, leading me to believe that maybe they do things differently in Europe, because the realism of the devastation and the cringe-inducing injuries is utterly transfixing. Of course, they also help the film to be even more genuinely terrifying than a story about a natural disaster that killed almost 300,000 people inherently is. Necessarily, it’s a very difficult movie to watch, which puts me in the awkward position of having to highly recommend a film I didn’t enjoy. ■