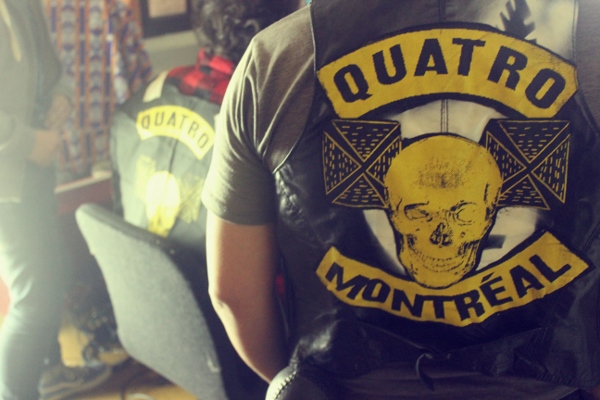 The work of eccentric Frenchman and iconic strange-rocker Jean-Pierre Massiera was revisited in 2008 with the release of two compilations, Psychoses Discoid and Psychoses Freakoid. To fete the man and his records in the colonies, the guys from Duchess Says teamed up with Mingo l’Indien (of les Georges Leningrad fame) to cover a stack of his songs at Zoobizarre. Hence, Quatro.

“This is not a serious project,” says Mingo l’Indien. “People thought that show was great, so we started to compose songs, in the style of the kind of music we listened to when we were young — Quebec rock like Offenbach and Plume Latraverse. It’s kind of a joke.”

Given Mingo’s solo electroacoustic work and the more hectic touring and recording schedule of Duchess Says, Quatro haven’t maintained a high profile, but they’re back on stage tomorrow night to launch an EP, Les éclairs me donnent la vie.

There’s also a full-length album on the way, one that will continue to mix the influences of French, Queb and krautrock, though it’ll be very different from the EP, according to Mingo. But don’t mistake this spike in Quatro activity for careerist ambition — he insists this is totally a lark, an unpretentious exercise in nostalgia.

“This is like a prank — this is me. I’m not a serious guy,” Mingo says. “I’m old now, so I don’t have anything to prove to people; I proved enough when I was young, with les Georges. This is just an excuse to laugh and drink.” ■