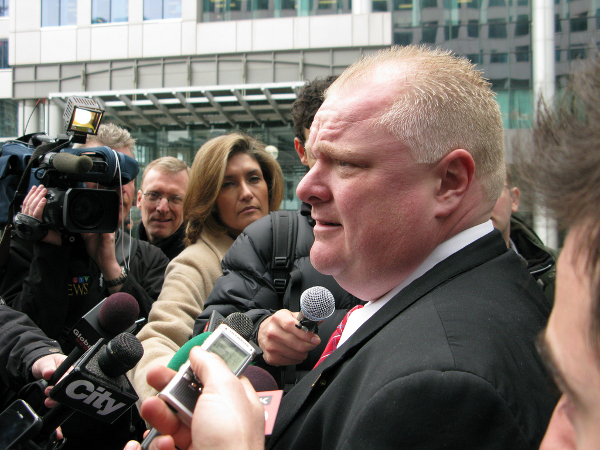 I realize the inherent hypocrisy of this column, so don’t bother pointing it out, but it must be said one time only: Toronto, the rest of us do not care about your mayor problems.

We’re all saddled with elected officials we can’t believe slithered their way into positions of power. Toronto, you are not special in this regard. Your obsession with your mayor and how he’s ruining your otherwise pristine metropolis is unhealthy, and your attempts to elevate your miserable situation above the miserable situations of others, especially to us apathetic outsiders, is shameless.

You think you have it rough? Our longtime mayor presided over a decade of kleptomaniacal corruption and had to resign over what ultimately proved to be made-up testimony; Laval’s former mayor may have had a secret Swiss bank account; and Mascouche’s ex-mayor stopped showing up to work after being charged with fraud and corruption. Your mayor’s unforgivable sin, besides looking like an engorged Timbit, was not knowing proper protocol for using city letterhead. Of course, you then took your own grievances too seriously, tried to depose him, and failed miserably.

I know what you’re going to say, Toronto: he’s ripping up bike lanes, sacking watchdogs and kowtowing to private interests. At least you guys have a modicum of transparency here. We can’t even get a clear answer as to what layers of corruption our mayor was aware of during his time in office.

Let’s face it, part of your problem with your mayor is he’s a crude, large doofus. Don’t listen to your own advertising: a true leader need not be on a guyet, and, if anything, your mayor represents the silent majority of Golden Horseshoe types (at least from my outsider’s vantage point). I also have no sympathy for a city that won’t stop shoving Don Cherry down Canada’s collective throat every week. Clearly you Torontonians have a type.

Look at how gleeful you were when, for a split-second, it looked like you had something on the big galoot. A little extreme, no?

Calm down, Toronto. I’m sure your mayor is as incompetent as you say, but really, act like you’ve been there before. We’ve all got mayor problems — it’s just that the rest of us know the eventual replacement won’t be any better.

The NHL lockout may be over, but Habs defenceman P.K. Subban is still verboten from hitting the ice. He’s a restricted free agent, meaning unless he gets traded or another team swoops in with a bloated offer sheet, he’ll eventually return. Those myopic few saying he should be dealt for his insubordination couldn’t be more misguided, but I also have issue with those who whine about whether he should be making $3-million or $4-million or whatever. What the hell do you care? It’s not your money. And what of the cap? What’s an extra million when it comes to your core players?

And, finally, I had a blast last Saturday at Igloofest, with one caveat. It was billed as a TNGHT performance, meaning Lachine native Lunice and Scottish producer Hudson Mohawke, but only the former showed up, and the change was announced the day of. I doubt the set would have been much different with Mohawke, and at $20, Lunice was well worth the cost. But are consumers, who shell out major coin to see live music, entitled to know from the onset precisely who’s going to be hitting the stage? If you paid $200 to see U2, and Bono, the Edge and two Ewoks showed up, would you feel swindled? ■