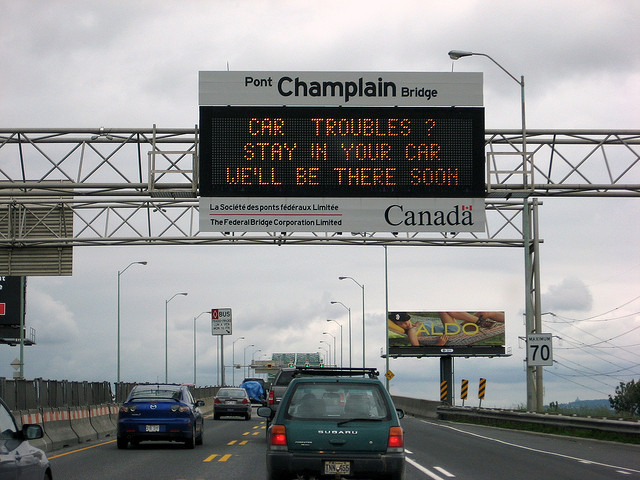 Just when you thought the Quebec separatist movement had died a long overdue death, voilà: Un nouveau mouvement pour le Québec. The CBC reports the group is organizing a conference in Montreal for May to drum up support for sovereignty across party lines. Is it legit? Well, according to a Léger poll, 40 per cent of the province thinks Quebec should cut the cord. Anglos, start preparing your fleeing-to-Ontario hyperbole.

Or, if you intend to flee in a southerly direction and are particularly athletic, you’re in luck — or you’ll be in luck eventually, once the new Champlain Bridge gets built in what, like, 2094? The Gazette’s transportation reporter Andy Riga wrote over the weekend that the new construction linking Montreal to the South Shore will feature a bike lane.

Everybody’s favourite scapegoat, Scott Gomez, has been sent packing. The perennially under-performing Habs centre now gets to sit around in his underwear eating Cheetos and drinking RC Cola for the remainder of the hockey season — and will get a cool $5.5 million to do it. Ugh. We’ve been doing that for years now. Where’s our briefcase stuffed with cash?

As the race for the Quebec Liberal leadership, um, heats up (?), the first debate between three people who want a job no one else possibly could took place last night. Those of us who watched it saw Raymond Bachand, Philippe Couillard and Pierre Moreau go back and forth on labour and education issues, including overhauling the CEGEP system, as Moreau suggested. And restoring voter confidence in light of the old Charbonneau Commission was an issue all three candidates kind of, sort of agreed was a big deal.

And, speaking of Charbonneau, Michael Applebaum, who became mayor as a result of the commission, this weekend denied he was under investigation by it over shady real estate deals in Côte-des-Neiges/Notre-Dame-de-Grâce, his home turf. Who’d have thought that working as a realtor could conflict with a guy’s service as borough mayor?

Finally, a man on a snowmobile died over the weekend after passing under a moose in a community halfway between here and the Gaspé peninsula. The CBC reports that the moose ran away and most importantly, that the snowmobile sustained little, if any, damage. ■