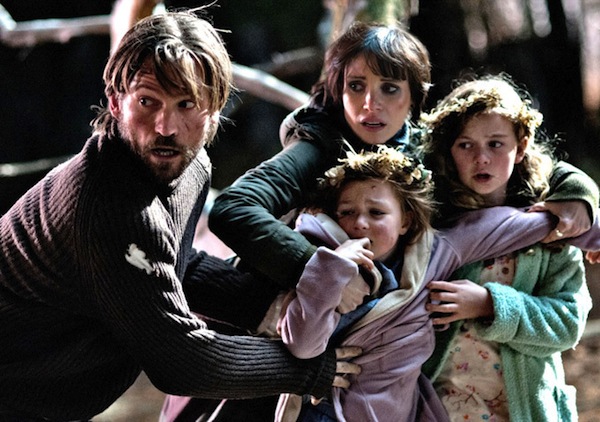 Two types of people will head to the cinema to see Mama this weekend: horror fans looking to kill some time with the newest scare-fest available for mass consumption, and those who put their faith in Guillermo del Toro, whose name is being used to market the crap out the latest film he’s executive-produced. The former will probably have a pretty great time with the myriad gross-outs and scares on offer, but the latter group of hopeful film-goers might find they’ve put their trust in the wrong nerd-guru.

Little sisters Victoria and Lilly (Megan Charpentier and Isabelle Nélisse) suffer tragedy at every turn, abandoned in a broken-down, unused old cottage in the middle of nowhere after losing both their parents. Luckily for the girls, there’s a creepy cloud of a wretched witch-ghost-thing called Mama willing to care for them, feed them cherries and sing them lullabies.

Years pass and the girls are found as severe head cases: walking on all fours, devouring insects and grunting at weeping, dark cloud-spots on the wall. Later, when they’re cleared from the psych ward, they promptly move in with their uncle Lucas (Game of Thrones’ Nikolaj Coster-Waldau) and his rock-star girl pal (Jessica Chastain) who, not surprisingly, faces the wrath of a jealous ghost not yet ready to let go of the kids she’s been raising.

Mama holds the promise of being a thoughtful, nuanced ghost story, much like del Toro’s own 2001 film The Devil’s Backbone, but it doesn’t deliver. Sure, there’s creepy shit here — seasoned monster performer Javier Botet’s cracked-out, gravity-defying spider movements make Mama a fairly terrifying presence — but it doesn’t balance out a plot rife with ridiculous coincidences, visions and messages from the dead, or bone-headed characters who refuse to act like real human beings. There’s little internal consistency either, with the girls flip-flopping in their response to the ghost from moment to moment and Mama seemingly able to manifest new magical abilities whenever the filmmakers require a device to contend with a plot difficulty.

On the bright side, the kids deliver outstanding performances (I hate to say it, but they actually put Oscar nominee Chastain to shame here), and the music by Fernando Velázquez (The Orphanage) is one of the more masterful scores afforded to recent films of this genre.

Mama is written and directed by feature first-timer Andrés Muschietti based on his spooky and surprisingly effective short of the same name, in which the ghost appears and acts in much the same manner. If you want to see the best he has to offer, skip the full-length flick and watch this short film. ■