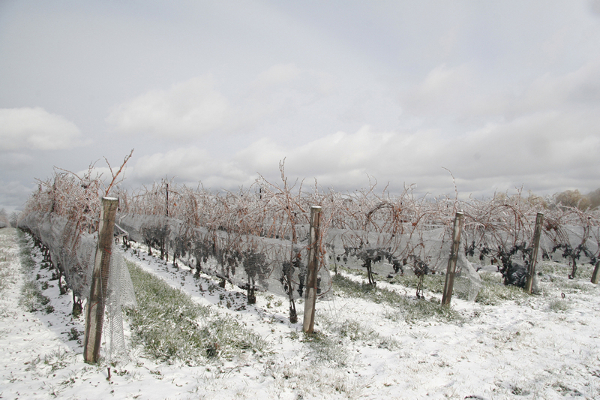 If ever you venture beyond our borders to ask a wine geek about Canadian wine, you’ll almost always hear the word “icewine” in response. After all, it’s Canada’s wine trump card — the only style of wine it produces arguably better than any other nation. (Followed by Germany, where eiswein was created a couple centuries ago, and with Austria in a distant third.)

Why? Well, because it’s cold. A consistent Canadian winter is the key to icewine success. Normally, grapes are harvested for wine in the period between August–October, but in order to make icewine, grapes need to be left on the vine until a stable -10°C to -13°C is reached. This usually occurs in early December in southern Quebec and right about now in southern Ontario, which churns out about three-quarters of Canada’s icewine.

Although British Columbia and Quebec have both played crucial roles in defining the Canadian icewine industry, it’s Ontario that has propelled it onto the international stage. Inniskillin, a winery located in Ontario’s Niagara peninsula, not only produced the first successful Canadian batch of icewine three or so decades ago, but is also the most recognized Canadian icewine brand in the world today.

Any grape, weather permitting, can be used to make an icewine, but some yield better results than others. Riesling is the classic and is the force behind Germany’s eiswein and many Canadian icewines. In Canada, the French hybrid grape Vidal is also widely used and almost entirely unique to this land. Other varietals commonly used here include Cabernet Franc, Chardonnay and Frontenac.

Icewine, wherever it’s from, is not cheap. Bottles are normally a fraction of the size of a regular bottle of wine, so the price-volume ratio can climb fast. German versions will usually cost between $100–$200 in Quebec; meanwhile, Canadian icewine can be found on store shelves for a pair of two angry queens (aka $40), with medal winners still well under the $100 mark. In 2006, Ontario’s Royal DeMaria winery released the world’s most expensive wine — a 375-ml bottle of Chardonnay icewine for a cool $30,000. That’s a lot of PBR!

Canadian icewine is quite often at the deep end of the sweet scale and usually moderate in alcohol, clocking in around 10 per cent, which makes it a great choice for dessert wine. Expect intense aromas — Riesling and Vidal have rich peach, apricot, tropical fruit and citrus flavours, while Cabernet Franc has ripe strawberry and raspberry jam flavours. Here are a few to try:

Niagara Peninsula, Ont.
For a taste of the Ontario original, pick up a bottle of 2008 Inniskillin Vidal ($28 for 200 ml) and pair it with sharp cheddar. Another great Niagara offering is the 2010 Tawse Cabernet Franc ($35.75 for 200 ml), which pairs well with sweets like chocolate mousse.

Serve them chilled in the 5°C–7°C range in small port-style glasses.

Icewine getaway
The best way to experience Canadian icewine is to go to the source, and no time is better than now. Hike westward down the 401 to the Niagara Icewine Festival, which runs from Jan. 11–27 and is a great opportunity to freeze your butt while tasting the many excellent  icewines not available outside the region. This is a world-class event well worth the frosty trip. Five to try: