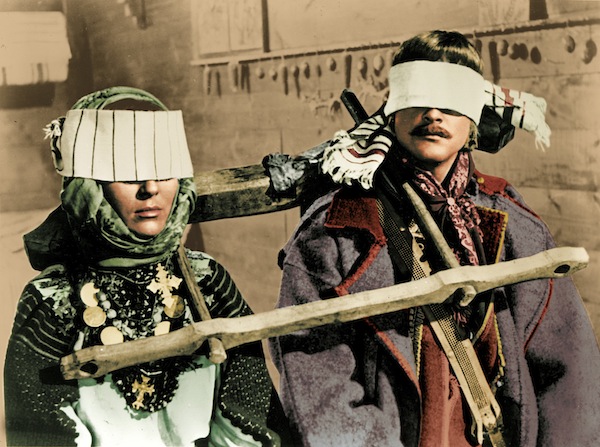 Shadows of Our Forgotten Ancestors

Arthouse film fans in Montreal are in for a major treat starting this Saturday. Sergei Parajanov (1924-1990), one of the greatest and most underrated filmmakers in cinema history, is getting a full retrospective of films, screened in 35mm and absolutely free.

It’s all courtesy of Marcin Wisniewski, a recent graduate of Concordia’s masters program in film studies, who’s organized the series, co-presented with Concordia’s FOFA Gallery. Wisniewski became captivated with Parajanov’s films after seeing the director’s The Colour of Pomegranates (1969). “Watching that movie, it just hit me that if there ever was a definition of art cinema, this was it,” he recalls. “This was painting on film… overwhelming, spectacular, beautifully composed and full of meaning. You could take any shot and write a paper on it. I was just awestruck that something like that is out there.”

Born in Armenia and working in the Soviet Union, Parajanov developed a hallucinatory aesthetic and a mythical storytelling style that enamoured him to international audiences, but not to the Stalinist regime. The director spent part of the 15 years between Pomegranates and his next film, Legend of Suram Fortress (1984), in the gulag after running afoul of the authorities.

After researching Parajanov’s career, Wisniewski was further shocked to discover how little known the filmmaker is in these parts. “I was a film student, and I’d never heard his name,” he says. “He has never really had a retrospective in Canada.”

Wisniewski has set out to correct this with an ambitious program. Over the course of a month, all four of Parajanov’s features are screening, as well as a full-length documentary on the director. Each one is accompanied by a contemporary short film (chosen by Wisniewski for their thematic or aesthetic connections to the main feature) and a lecture.

“I support a more active engagement,” explains Wisniewski. “That’s why there’s a lecture series, so it’s not just that you come in, watch a movie and walk out.” Touching on topics ranging from poetry to folk tales to Middle Eastern aesthetics, the lectures are intended to help audiences “be more clued in to what they’re watching. These kinds of movies can be isolating for the audience, because they’re not really what we’re used to.”

But while they may be complex, the films are also incredibly beautiful and poignant. The 35mm screening format — as Wisniewski points out, Parajanov “worked with celluloid, and that’s the best way to experience it” — and the free entry should make this series, running every Saturday at 2 p.m. from Jan. 16 through Feb. 19, a no-brainer for fans of classic cinema. ■