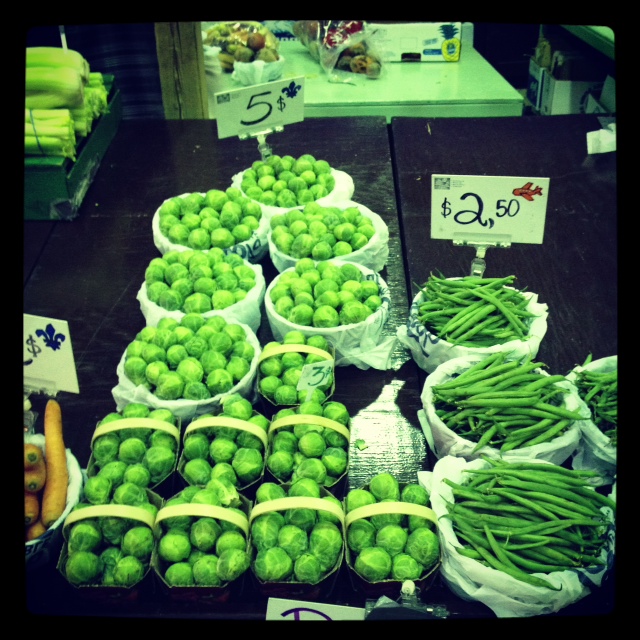 Brussels sprouts: A splash of green in mid-winter. Photos by Stacey DeWolfe

In what people today call “the olden days” — meaning the years leading up to Y2K — being a locavore in Montreal in January meant subsisting on a diet consisting primarily of carbohydrates.

These days, urban traditionalists freeze, pickle and preserve the flavours of summer for winter consumption, and the emergence of local greenhouses, both homegrown and industrial, means that palatable tomatoes, fresh herbs and lettuces can be found within the requisite 100 miles. But if you want to keep to the spirit of things, eating seasonally means ingesting lots of root vegetables.

I remember going to a dinner party when I first moved to the city in 2001. It was a winter much like this, and the hosts’ classic Plateau apartment was cavernous, dimly lit and unbelievably cold (the tenants were too afraid to turn on the decrepit gas furnace that took up much of the living room, and too willing to endure the constant shivering and teeth-chattering in exchange for dirt-cheap rent). If memory serves, about 85 per cent of the dishes were made from sweet potato and the other 15 per cent from Brussels sprouts. And though I may be exaggerating ever so slightly, what I do remember was the sense that this was the food we were supposed to be eating at this time of year: food that sated, warmed and soothed us, and prepared us well for our long, snowy trek home.

According to the extremely unscientific but quite useful anecdotal research I conducted over the holidays, the ratio of people who like Brussels sprouts to those who do not is about 1:7.

This is something that, as a loyal fan — in my family, I am the one — I can never quite wrap my brain around, especially since many in the anti-sprout camp cite other brassica family members such as broccoli, cauliflower and kale as favourites. My suspicion is that most of these people may have had a bad experience with an overcooked Brussels sprout in their youth. A Brussels spout that has been boiled until it has lost all colour and texture is a very unpleasant thing, indeed. But I implore you, if you are in the group of seven, to open your mind to the possibility that you might actually learn to like the Brussels sprout. The way to do that? By adding bacon, of course.

The process
The first step is the most tedious, and, like many tedious procedures, is best done with a cocktail and the company of a good conversationalist (or podcast, if no human companions are available).

What you want to do is turn the bowl of whole Brussels sprouts into a bowl of leaves. This is simply done by slicing off the end of each bulb and pulling the leaves off one by one. It is also acceptable to simply trim the bulbs and cut them into quarters, but the more labour-intensive method makes the sprouts less recognizable and so less likely to be passed over by non-fans.

Wash the them well in cold water, allowing the water to cling to the leaves.

For a dozen Brussels sprouts, fry four slices of bacon to your preferred crispiness. When done, remove the bacon from the pan and pour off as much of the fat as you desire, making sure to leave enough to cook the vegetables in.

To the pan, add one thinly sliced clove of garlic, two thinly sliced scallions and one clementine, quartered, flesh side down. It is important to slice the garlic rather than crush it, as the slices will caramelize in the juices. Once it has started to brown, add the Brussels sprout leaves and sauté them for a few minutes until they start to wilt. Then, with a pair of tongs, pick up each of the (hot!) clementine quarters and squeeze out the juice.

Before removing the pan from the heat, crumble the bacon and return it to the pan, add a handful each of whole walnuts for texture and one of pomegranate seeds for additional sweetness, along with a splash of apple cider vinegar to balance the flavours. Season with salt and pepper and serve to the most unwilling of Brussels sprout eaters.

Watch them devour it. ■