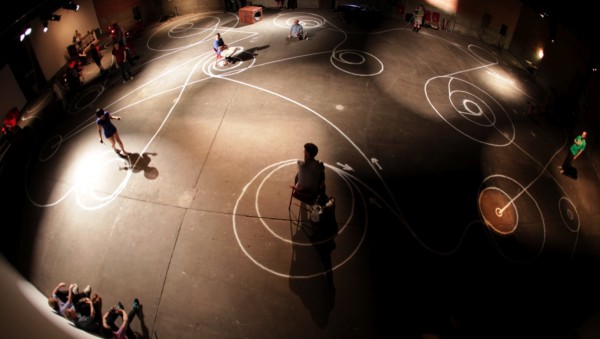 Bringing the audio and visual arts together at Objet Inusité.

Several events this week make it well worth getting off your couch and out into the snowstorm that is Montreal, including a display of flags employing the marine signal system, a summit on audio/visual art and a parade of DIY lanterns coming to Mile End.

Tonight at WWTWO, there’s We Are Drifting, 2013. The exhibit features large, maritime signal flags draped from the windows of the gallery, visible from the street. They use International marine signal flags, a linguistic system most commonly used to signify distress and help, to spell out the exhibit’s name. The installation is the product of artists Miriam Moren (originally from Vancouver and now Halifax-based) and Daniel Joyce (from Newmarket, Ontario). Vernissage Dec. 18, WWTWO (170 Jean-Talon W., #206), 7:30. The installation will be on display from street level to Jan. 10.

Last weekend, the RuePublique art collective conducted a lantern-making workshop, and the results will be on parade this Dec. 21. So, if the world doesn’t end, and if excessive winter doesn’t get you down, head to Mile End and enjoy the sight of beautiful homemade lanterns lighting up Parc Avenue. The parade kicks off at Parc Jeanne-Mance and participants will head north to the YMCA on St-Viateur, where they will be greeted with hot chocolate and cake. The parade starts at 6:15 p.m., from Parc Jeanne Mance (corner of Mount-Royal and Esplanade) ■

By Kristen Theodore and Emily Raine