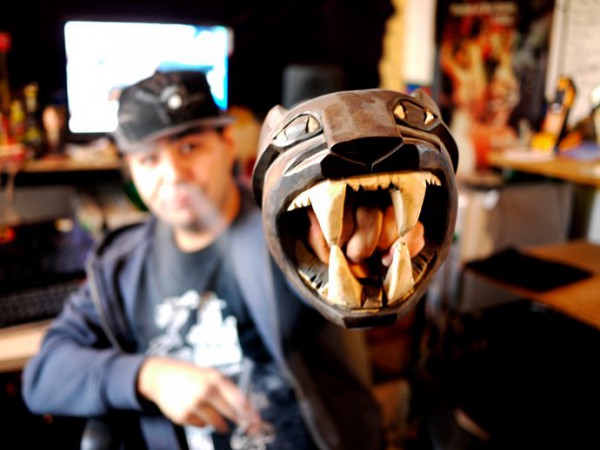 DJ BuddaBlaze has had Montreal covered for a decade-plus.

His presence behind some of the highest-profile decks in Montreal’s hip hop — be that on the radio, in the clubs or backing the city’s best MCs — is ubiquitous. And he can basically make or break any of them.

Early this morning, he released his first-ever beat tape, Got It Covered, a nine-track collection of instrumental hip hop covers recreated top to bottom, in tandem with his newest post on Mook Life, where he photoblogs monthly as All-City Chilleur “Brudder.”

“This was a full concept album for my former group F.B.I. It’s been sitting on the shelf for about five years,” says Mooked-out Mohawk BuddaBlaze. “Some of the tracks were full songs.”

With two full-lengths close on the horizon, the multidisciplinary DJ simply “wanted something out” this year, his last executive musical stamp having been made on DShade’s 2011 record, The Water Principle.

“Initially (with F.B.I.), we just tried to choose a lotta crossover-able tracks that were very popular, and then just tracks that we thought were slamming. And then tracks that I just thought would be cool and challenging to re-do.”

Snoop, Three 6 Mafia, Wu-Tang and KRS are among artists getting the instrumental redux, with BuddaBlaze recreating classics from scratch, recording his own live versions with bass, guitars, keys and drums and meshing them where fitful with traditional loops and samples.

“The concept was simply a retake on these classic tracks, and this was way before [ex-Slum Village Illmatic reconstructionist] Elzhi or anybody else I’d heard of doing it like this.

“Like ‘G Things’,” he continues, “I re-did from scratch, like zero, everything is made. There isn’t one sample in that song. I went back to the originals where they got the samples from and listened to how they did it, and then tried to do my take on that, but with the arrangement of the Snoop Dogg song.”

Growing up playing rock and metal and having worked professionally in radio since ’91, he began his schooling in rap with his homie Chief Rock in the later ’90s and fell in with folk like Orion and Jordan Dare, who would all help hone his hip hop and break beat sensibilities.

“I always thought, like, it just made sense to me: there’s a guy and he plays that part. I never thought like, ‘Oh shit, they’re chopping up parts of songs!’”

“[When I got into] metal, I’d go into the basement at Rock en Stock on Crescent and I’d buy records off the album cover,” he recalls. “If I didn’t know what was up, I’d just judge it by that, or the label. And then I’d go to Plattsburgh, and go to the hip hop/rap section and pick records off their cover.

“For a long time, I remember getting AZ and Jay Z mixed up. Heltah Skeltah’s Nocturnal was a record I bought just off of the cover — just these crazy dudes with glowing eyes hanging upside down like vampires.”

The connoisseur’s eye begat a DJ’s ear, and what works best became as clear as a compass.

“Basslines, whatever, it’s nothing to me,” shrugs BuddaBlaze. “Guitar, unless it’s intricate, it’s not really a problem if I’m trying to figure something out. I’m not super-virtuoso by any means. I was never a soloist, only a rhythm guitar player and singer, but for the most part I can get what I want out of the instrument.

“Piano is a lot harder,” he says. “I can do single lines and shit, but I’m not great at chords. I’m not trained at all. I play it how I think it is, and then play it with the original. ‘Is it the same key?’ Or, do I want it in a different key because I just want it to sound different, but it’s still the same, you know what I mean? In that sense, it’s pretty simple, straight ahead.