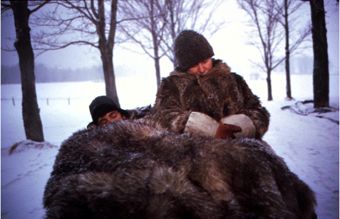 Unfortunately for everyone who knows me, I happen to believe that there is a direct correlation between the amount of holiday films I can view before December 25 and the pending snowy weather. If I can get all my favorites in under the wire, I will have done my part for the white Christmas cause, and all will be well in the world.

Mon oncle Antoine, the 1971 film from Montreal’s very own Claude Jutra, usually kicks off this holiday watching frenzy. Luckily enough, Mon Oncle Antoine, which happens to be regarded a celebrated and recognized Canadian film, has more to do with lost corpses, drunken belligerence, illicit affairs and defeated innocence than the usual humdrum holiday fare. It is certainly a holiday movie, yet one that takes a slightly unconventional approach to narrative.

Set in the white-capped and picturesque asbestos mining country of Northern Quebec during the Duplessis era, the film tells the coming-of-age story of Benoit, a teenager reluctantly employed in his uncle’s general store. This store, unlike whatever quaint general store you might imagine, stocks a plethora items that expand in importance from a jar of jam to the gloomy stash of variously sized wooden coffins that remain hidden in the adjoining barn.

On Christmas Eve, Antoine, uncle and guardian to Benoit, is called to collect the cadaver of a teenager who died the night before in the nearby town of St-Paulin. Benoit, who is keen to accompany his uncle for the first time on his morbid journey, is not only introduced to the daunting task of transporting the dead, he is forced into a position where he must relinquish all innocence in the face of disorder.

Since its release in 1971, Mon oncle Antoine has received widespread international critical acclaim and is thought by many to be the greatest Canadian film ever made. Although Claude Jutra only made three feature films for the cinema before his untimely suicide in 1986, he remains to this day Quebec cinema royalty and the master of orchestrating the very bluest of blue Christmases. ■

Mon oncle Antoine is available to stream for free at the NFB Online Cinematheque. If you prefer physical media and/or supporting your local video store, the two-disc Criterion version is available to rent at Boîte Noire and Le Septième in the east and Avenue Video in the west.