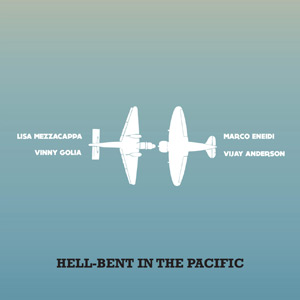 Vinny Golia has made some unusual choices. In 1973, he moved from New York to Los Angeles, away from the centre of the jazz universe to the more cooperative Left Coast scene. He established his musician-run New Winds label in the 1980s, the start of tough times for the record biz.  He also bucked conventional wisdom to concentrate on just one or two instruments, devising a rotating practice schedule to master the full families of saxophones, flutes and clarinets, as well as shakuhachi, bassoon, and so many other winds that his Penguin Guide to Jazz list ends with “etc.”

Having recorded duo sides with Barre Phillips, Ken Filiano and the sublime Intersections with Bertram Turetzky, Golia clearly has a penchant for bassists. Lisa Mezzacappa is handed a major role here, starting off most pieces with solo riffs and setting the tone throughout.

Like Golia, alto saxophonist Marco Eneidi has changed bases, completing the roundtrip from California to NYC and back west between 1981 and 1995, before settling into Austria in the early 2000s.  The unit is rounded out by versatile drummer Vijay Anderson.

Although improvised throughout, the nine tunes cover various free jazz sub-genres. Someone has also spent some time selecting the humorous song titles that perfectly match the diverse moods. Amongst the uptempo pieces, “Meteorites” is classic high energy. It kicks off with a one-note bass rumble coupled with rim shot percussion, quickly building steam with rapid and overlapping trills and shrills from the woodwinds. “Fumbling Fulminations” has quick-witted, fast-paced lines, while  Mezzacapa walks fours through “Everything Imaginable  Can Be Dreamed,” which builds to an angular avant-bop.

On the pensive side, a quivering arco bassline recurs in “Inessential Melancholies,” a droning work topped by whistling, keening horns.   “Pendulum” is sparse, quiet reed thoughts matched by low-in-the-mix shimmering metallic percussion. The beauty is in the details as breath winds through the winds and the wood creaks on the bass.

“Catholic Comstocking Smut-Hound” sizzles with a bass and drum duo for almost four minutes before cacophonous horns enter. While perhaps the kind of art the church wants banned, this mayhem can inspire its own religion.

Hear this preview of General Dome, the upcoming album by experimental Hudson, NY duo Buke & Gase. It’s out on Jan. 29, 2013 via Brassland.

Excited for the Dec. 11 release of Big Boi‘s Vicious Lies and Dangerous Rumors on Def Jam? Check this catchy tune and neon-rich video featuring one of the other chicas from Destiny’s Child.