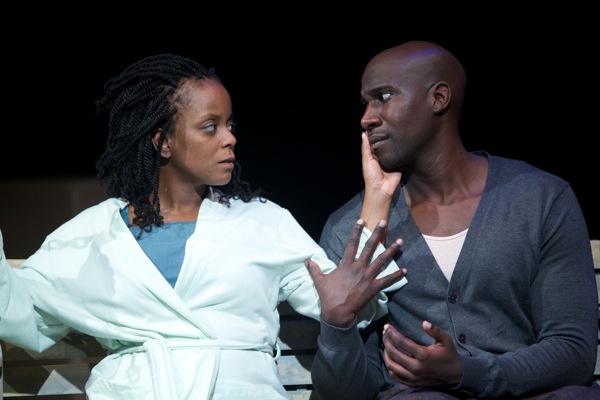 Lucinda Davis and Dave LaPommeray as Billie and Othello

The Black Theatre Workshop’s rendition of Djanet Sears’s award-winning and moving script for Harlem Duet proposes a prequel to Othello, in which the titular tragic hero leaves his first (black) wife Billie for the much younger and whiter Desdemona. Set mostly in Othello and Billie’s former apartment in Harlem, the play depicts the common-law couple rupturing in the present, but flashes back to 1860 and 1928 to see how the same wound is reflected in each period’s framework of racial and gender inequalities.

For Billie, played in a dazzling, tour-de-force performance by local standout Lucinda Davis, the concentrated pain unique to being left by the one you love is intensified by jealousy and anxieties about the value of black and white women’s skin. Even with generous moral support from her sassy landlord (Neema Bickersteth), kindly sister-in-law Amah (Liana Montoro) and, eventually, her estranged father (Jeremiah Sparks), Billie quickly reaches the end of her emotional tether and dances on the border of madness, especially after she and Othello (Dave LaPommeray, returning to the stage after a law degree’s time away) succumb to nostalgia and sleep together.

While any breakup inevitably leads to navel-gazing what-if meditations on time wasted and opportunities lost, in Billie’s case, the costs of the relationship are palpable. Intellectually minded, Billie supported Othello, now a professor, while he put himself through school, and he now finds himself unable to do the same as he buys a new home for himself and Mona, the unseen modern iteration of Shakespeare’s unfortunate heroine.

As Billie talks through her injury, the play highlights tensions within communities of colour, and especially fears around black men leaving black women behind as they ascend through the income and class structure. In her dismay, Billie turns to witchcraft and dark herbal arts, cursing the handkerchief that throughout the play symbolizes their love (which, if I understand what follows in Shakespeare’s original, totally works).

Director Mike Payette makes the most of a small yet effective set, tiny but dynamic cast and one monster of a script to create the kind of theatrical performance that lingers in the mind long after you’ve left the theatre. Harlem Duet is simply not to be missed. ■