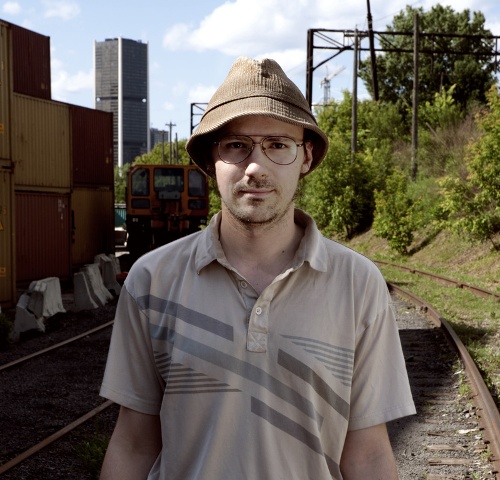 One of Montreal’s most interesting and prolific young composers is churning out sunny, warped, AM Gold nostalgia in relative obscurity out of his Pointe St-Charles home.

Montreal composer Matt LeGroulx has released five albums and one EP under his EXPWY (pronounced “Expressway,” or “Expweee” as some GPS devices say it) nom de plume since 2010, a continuation of what he was doing with his previous band, Tiny Iota. They’re all available for free on his bandcamp and there are more on the way, as he’s currently taking time off work for paternity leave.

His lack of recognition in the local scene might be attributable to the fact that he doesn’t perform live too often. It could also be because of the way he approaches each album. “They’re like genre studies,” the 30-year-old says. “I like doing a specific project on each genre. You take the clichés that come with the genre and then you play around with them.”

His latest album is Little Hand Fighter, a collection of calm bossa nova cuts released in July. In May, he released an EP inspired by tropicalia, while April’s Bag of Waters sounds like a sloppy rock recording from the ’50s. He’s currently working on two EPs that can be played simultaneously: one about the Ville-Marie Expressway and the other about the new Turcot Interchange.

I spoke to LeGroulx at his home about recording with baby, intentionally sounding like crap and his civic-minded new project.

Erik Leijon: Where do you record?
Matt LeGroulx: I have a room here where I do it, although sometimes the drums are done elsewhere. Little Hand Fighter was done here. Because I’m on the nightshift with the baby, I have time at 2–4 a.m. to do stuff. I didn’t want to make too much noise, so I’d have one little shaker, tap it with my fingers really close to the microphone, then compress the shit out of it and make it as loud and big as I can get it afterwards. Everything was done like that. There are parts where you hear a bass drum — I actually put a sock over the lower part of my classic guitar and hit it with my thumb.

EL: Have you always been this prolific?
ML: In high school I made about five or six albums, although now’s been an unusually fertile period. I stopped worrying about whether I like what I’m doing, so that helps.

EL: Is your music meant to be nostalgic?
ML: I love the sound of records from the mid-’50s through the late-’60s, especially the ones that were recorded really poorly and sound really grungy and full of reverb. That music has a lot of power over me because at heart I’m a nostalgic person, but once you get to my teen years [growing up in Alexandria, Ontario], I don’t want to listen to ’90s music again for the rest of my life. It’s funny because there are a lot of people my age who have already come to a standstill in their music development and they’re not listening to anything new. They’re already starting to go back to the crap they listened to in high school. I suppose everyone’s a slave to their nostalgia to a certain degree.

EL: But is it any different, being nostalgic for a time that was before you were born?
ML: I can be nostalgic for that because I didn’t live in it, I have no personal associations with it. I want to go back even further than high school, to when I was a young kid, and what I was listening to then were the Beach Boys and the Police. The only thing I have to remember from that period are summer days, drinking orange juice and having really innocuous, carefree kid fun. It’s hazier, I remember less, so it’s so much more vague. It lets you idealize it more.

EL: How do you make your recordings sound hazy then?
ML: My dirty little secret is I record everything on a computer, and then try to make it sound like a shitty cassette that’s been sitting on a dashboard for five summers in a row. I use EQ-ing, reverb, delay and other stuff. I usually have 10–25 individual tracks on a song; I stick as much as I can just to obscure any cruddiness that might be in the music. The more you overstuff it, the less you notice the mistakes.

EL: How would the music sound if you didn’t put on all those layers?
ML: It would sound terrible. You would get to hear how horrible a singer I am, how little effort I put into the recording process, and how many mistakes I leave in. I like to wear clothes, I don’t like people to see me naked. The stuff I put on the recordings are my clothes, because my music isn’t pretty.

EL: What are you working on now?
ML: I’m currently working on a double EP, on one disc, six songs each that you can play simultaneously [not unlike Tiny Iota’s To Hell With All That]. The first EP is about a family that’s expropriated to build the Ville-Marie Expressway and the second is about a family that gets expropriated to build the new Turcot Interchange. Their stories are going to parallel each other, so when you listen to them at the same time you’ll hear all these things happen that highlight the stories. My hope is that they become an important contribution to Canadian culture. If I can pull it off, it will be something special; if I don’t, it’ll have been an interesting ride; and if I totally fuck it up, it will just be really shitty.