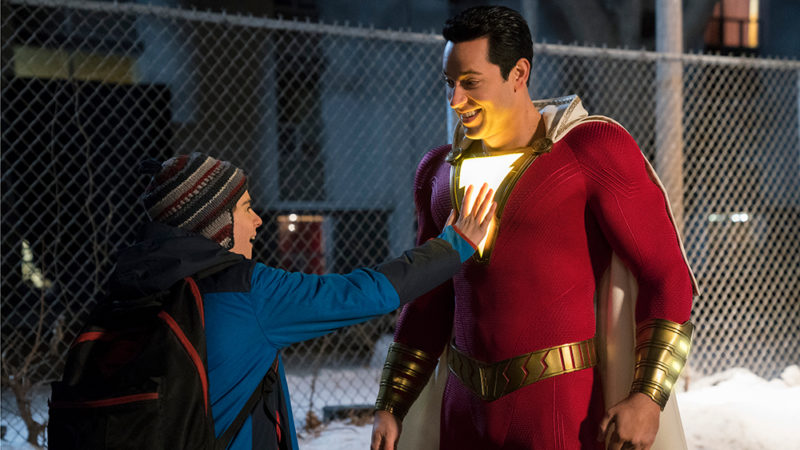 It seems like it should be obvious to me by now, but the cultural domination of superheroes in nearly all spheres of entertainment (they have not, to my knowledge, found a firm grasp on the record industry) has kind of overshadowed the fact that this began as — and has been for most of its existence — shit for kids. Superheroes are dark and tortured and complex now, but they weren’t always — they at least started out as a fun way to part children with their nickels and dimes.

This seemed particularly obvious watching David F. Sandberg’s Shazam!, a preteen-oriented superhero tentpole based on a comic book character that has remained firmly aimed at the tween set for longer and with more diligence than most of its ilk. Shazam! is a fairly silly concept that ultimately leads to a fairly silly movie — which is, at the very least, more appropriate than the metallic sadness and plastic tortuousness that DC has applied to Batman and Superman in recent years.

Billy Batson (Asher Angel) is a rebellious teen who keeps getting carted from group home to group home for his shenanigans. When we meet him, he’s locking cops into a pawn shop so he can use their computers to track down his real mom. His latest shenanigans have him living with Victor and Rosa Vasquez (Cooper Andrews and Marta Milans), former foster kids who are raising a huge family of foster kids themselves. It’s more or less purely happenstance that Billy is whisked away to a cave inhabited by Shazam (Djimon Hounsou), an ancient wizard who has harvested the power of the Greek gods and awaits only a successor to whom he can pass them on. To his great surprise, this means that Billy can turn into an adult superhero (Zachary Levi) just by yelling “Shazam!” At first, Billy and his foster brother Freddy (Jack Dylan Grazer) mostly use this power for fun and games, but when a man who was passed up for the same powers long ago (Mark Strong) surfaces, Billy has to put his big boy tights on.

Shazam! is essentially Big in spandex, a film whose form and function is rather obviously traced directly from beloved crowd-pleasing family films of the ’70s and ’80s. (Being set in Philly, the film gets away with an unsurprising amount of Rocky worship, but it finds plenty of space for other sundry geek shit.) Being that Shazam! originated in the 1940s, it’s unfair to say that all of these elements are lifted from ’80s classics, but Shazam! has that genial, on-the-edge-of-being-edgy feel of certain movies we seem to remember being better than they actually are. That means a whole lot of sassy teenagers and precocious children setting up extremely obvious-yet-crowd-pleasing bits of comedy in the first half of the film, which really tilts its balance in one direction.

There’s nothing wrong with making a superhero movie for kids. I imagine that if I had kids, I would be clamoring for one movie in the last 15 years that I could take my little kid to without them immediately wanting to bolt. Shazam! is aimed more at the 10 to 14 set, which also means it sands off some of the character’s more outlandishly cartoonish ideas in order to make the film more… well, I’m not exactly sure. Part of the problem probably stems from my lack of knowledge of the character and exactly what has been lost in translation — for a true comic book plebe like myself, Shazam! mostly just comes across as Superman for little boys who still openly acknowledge that girls are gross.

That’s not to say that the film isn’t pleasant. It’s an entertaining enough time at the movies that employs its curiously low-wattage cast well. Though I hardly think that this will break the curiously Brendan Fraser-like Levi, he’s pretty likeable in the role, and Mark Strong makes minced-meat out of your typical superhero villain role. It has a few good action scenes and is generally not that boring, even though, at 132 minutes, it certainly is overlong.

It’s just not a good sign when I can’t find anything to say about a movie besides going through a checklist of its elements and whether or not I like them. Like so many superhero movies of the last 18 months, Shazam! would have been greatly helped if it hadn’t come out in the midst of this endless flurry of superhero movies. Shazam! in 2008 might have suggested a colourful, bold future for a certain type of superhero movie; in its current incarnation, Shazam! suggests a genre with such tiny, incremental evolution that it may as well start going backwards.

Or maybe it’s a movie for kids and I’m no longer a kid — not even a “big kid at heart,” whatever that means. Maybe I still am a big kid at heart and I just can’t tap into this one. Maybe it’s just that simple. ■