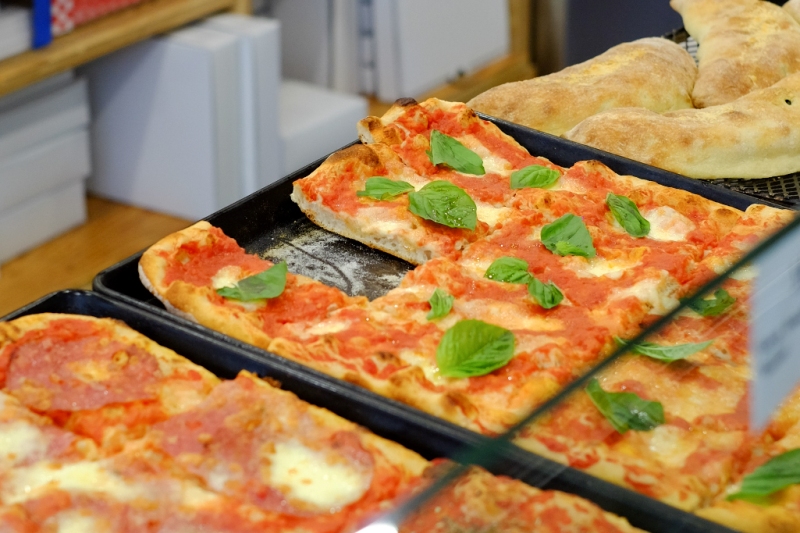 Little Italy caffè San Gennaro takes its name from the patron saint of Naples and pays homage to the feast in his honour. The pink lettering on the white awning is a beacon for the hungry, the thirsty and the under-caffeinated.

The caffè is the casual counterpart to the immensely popular Bottega pizzeria next door. This is the Covone family’s (Bottega, Hostaria) new baby, but after being open for nearly four years, at this point, it’s hard to remember the street before it. Unsurprisingly, the restaurant does pizza, but not pizza Napoletana like they do next door. Instead, they’re doing Roman style pies — the big slabs of thick square pizza — otherwise known as pizza al taglio.

In Rome, al taglio pizza is readily available and may very well be the original version of the grab-and-go pizza slice. As the story goes, Fabrizio Covone had what you might call a fascination with al taglio pizza and made it his mission to learn to make it, and make it well. His dedication led him to Rome to work under Gabriele Bonci, the man who Vogue magazine once dubbed “the Michelangelo of pizza.” Bonci’s pizza is famous and highly sought after — for some, eating at his Pizzarium is a life-altering experience.This includes the likes of Ryan Gray of Nora Gray and Elena, and evidently Fabrizio Covone. After learning to make pizza with one of the greatest pizza makers living today, Covone returned home to Montreal ever emboldened to open an al taglio counter of his own.

Enter San Gennaro. The shop is a beautiful microcosm of the neighbourhood. Walking in on any morning, you might find old friends and neighbours stopping in for a coffee, Marc-Olivier Frappier grabbing a calzone before heading across the street to Mon Lapin, Jesse Mulder of neighbouring Pumpui waving as he passes by the storefront, all amongst a continuous swirl of French, English and Italian that changes with the ease and grace of a UN deliberation. Only instead of global issues, the conversation is centred around pizza, coffee and how shitty this winter has been. That’s the beauty of this place: it’s nothing special to look at, the walls are clean and white, the tables are made of lightly coloured wood, and on a Saturday morning when it’s packed like a can of Sardinian anchovies, the only thing to look at is the gleaming counter display of pizzas and cake stands piled high with bombolone. But even when it’s packed, it oozes comfort.

The pizza is delicious. The Margherita is simple but hits the spit, with gooey fior di latte atop a sumptuous and delightfully acidic tomato sauce brought together with the fresh herbaceousness of a single leaf of Genovese basil. The Salsiccia is tempting, topped with enormous rounds of thinly sliced spicy sausage, onions and peppers all bonded to the beautifully baked dough with mozzarella. But as any faithful al taglio pizza lover will tell you, it’s the potato pizza that steals the show. Chunks of bright yellow potato scallop the length of the slice forms the textured base for warm slices of caciocavallo cheese and mozzarella to gently melt and hold the toppings in place. This is the kind of pizza that begs to be made al taglio, the more robust and thick crust stands up beautifully to the weight of the potato, and the starch of the potato and dough is balanced by the tart and salty caciocavallo.

I buy a slice to accompany my cortado, and immediately order another — it’s really that good. For those with a sweet tooth, I highly recommend the pistachio bombolone (Italian-cream-filled doughnut) — it’s exquisitely decadent.

While I savour my pizza, Mauro Covone walks in and immediately is greeted warmly by half the room, including my dining companion. She then proceeds to recount a story of two conversations happening simultaneously on either side of the San Gennaro front door; one between her partner and Jesse Mulder and the other between Mauro and herself, both conversations involved each of the restaurateurs genuinely expressing their affection and admiration of each other’s businesses and the gratitude they felt to be able to share the Little Italy community with the other. That’s the sort of sentiment that makes me love San Gennaro. It’s the kind of place where you feel appreciated, where you can come as you are, see old friends and make new ones. It’s that old-school kind of local caffè that you’d go to every day if you lived in the neighbourhood, like it was an extension of your living room, and it wouldn’t matter if the food was good — but damn, is it good. ■