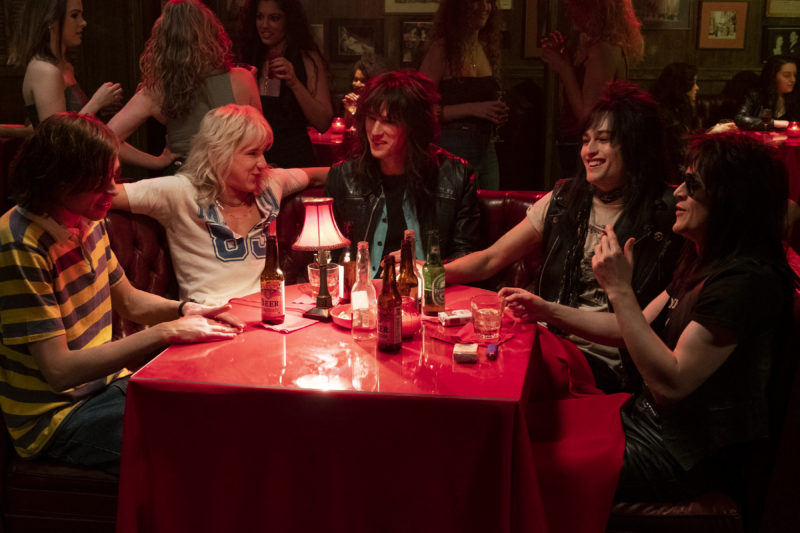 An adaptation of Mötley Crüe’s tell-all biopic The Dirt: Confessions of the World’s Most Notorious Rock Band has been in development for so long that when I first heard about it, Christopher Walken was tapped to play Ozzy Osbourne and Val Kilmer to play David Lee Roth. Plans for a film have been bandied about since the book was published in May of 2001, which doesn’t seem that long ago but is actually an eternity. Here’s a partial list of things that have happened since people have started to think about making a Mötley Crüe movie.

2. Rock essentially died, but we still saw a whole movement of Crüe-lampooning ironic poodle-rock come and go — so much so that the guy who headed up the most popular of those bands, the Darkness, went through his own rags-to-riches-to-rags story worthy of a Netflix biopic.

3. Tommy Lee got married to a social media celebrity who was not alive at the time that The Dirt begins — and who was not of age when the book was published. (In her defence, she is exactly my age, which is neither old nor young in the scope of things. I stand by this statement — do not email me.)

5. Lead singer Vince Neil became a reality TV star and was arrested half-a-dozen times. MC Hammer was the minister of his last wedding, which is a sentence that makes absolutely no sense when you match it to the things that happen in The Dirt.

6. Emo came and went, leaving in its wake a bunch of dudes that were essentially members of Mötley Crüe but with more overt feelings. The addiction issues were, more or less, the same.

7. The guy who wrote The Dirt with the band became a prominent pick-up artist, then had a crisis of conscience and is now some kind of self-help guru for reformed bros.

8. At least 20 (but I would guess more) lacklustre music biopics came out, including a music biopic parody that should ostensibly have killed the genre but instead made it stronger.

I firmly believe that, had The Dirt been made in 2002, its poster would be a dorm room staple. It would be an absolutely inescapable phenomenon on the heels of Almost Famous, raising these guys to near-mythical status and boosting their careers to such an extent that Vince Neil would certainly not need to be on Dancing With the Stars. But that’s not what happened. The Dirt brewed — or, more accurately, fermented — for nearly 18 years until it was birthed in its current state. Gone is Christopher Walken — in his stead is the guy who plays the Jack Black character in the School of Rock TV adaptation that I just learned existed a few minutes ago. Tucked away in the supporting cast of the film is Pete Davidson, the (allegedly) donkey-dicked comedian who is currently experiencing fame almost exactly equivalent to that of donkey-dicked Mötley Crüe drummer Tommy Lee some 25 years ago. Time makes fools of us all and all that shit, but The Dirt is coming out either much too late or much too early for its own sake.

Told through narration by all four members of the band, The Dirt takes us through the ups and downs of what proves to be not the biggest and certainly not the best of the ’80s hair metal bands, but unquestionably the wildest. Brought together by a love for hard rock and glam, glum, troubled bassist Nikki Sixx (Douglas Booth) and innocent, teenage drummer Tommy Lee (Machine Gun Kelly, who perhaps surprisingly gives the best performance of the bunch) join forces with taciturn guitarist Mick Mars (Iwan Rheon) and platinum sex symbol singer Vince Neil (Daniel Webber) to form Mötley Crüe, a theatrically inclined hard-rock band that takes the Sunset Strip by storm in the early’80s. Soon, they’re signed to Elektra by earnestly goober-ish A&R rep Tom Zutaut (Pete Davidson) and well on their way to becoming the biggest band in the world — which they are… for a couple of years, at least, until the kinds of things that usually break bands up wind up breaking Mötley Crüe up. 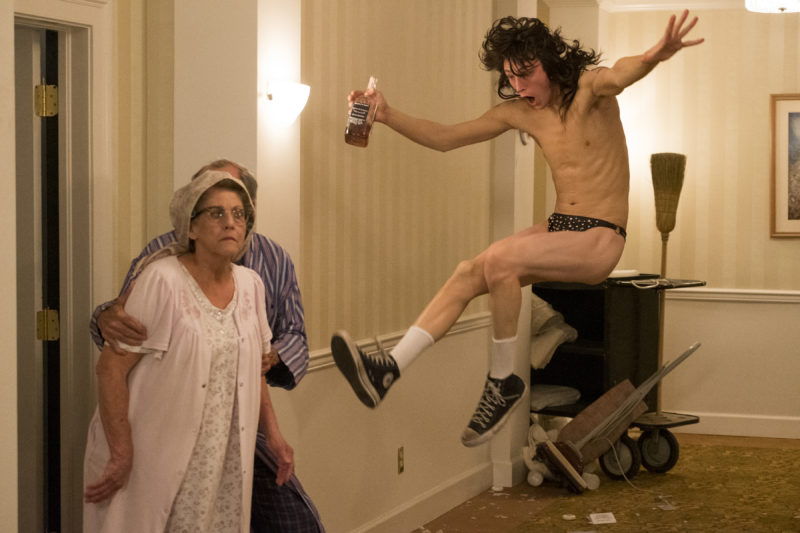 Machine Gun Kelly in The Dirt

Very early in the film, one of the band members’ voiceovers describes Mötley Crüe as “not a band, but a gang… of idiots.” The first half of The Dirt digs into what really made the book a best-seller: the outré rockstar shenanigans and TV-throwing antics of a bunch of drunken dinguses in skin-tight leopard-print pants. In this sense, The Dirt could hardly find a more simpatico helmer than Jackass director Jeff Tremaine: there is possibly no one on Earth who has clocked more time capturing young men being stupid fuckwads than Jeff Tremaine. In that sense, the first half of The Dirt works about as well as it possibly could: it’s all about excess and idiocy and the boneheaded camaraderie that links four different guys with similar haircuts and even more similar goals. If The Dirt were simply an hour and a half of Tremaine putting all these anecdotes into images, The Dirt would be a pleasantly stupid real-life riff on This Is Spinal Tap.

But The Dirt is a rock biopic first and foremost. Despite a few cheeky insistences throughout that everyone is an unreliable narrator and that what you see may be an embellished version of the truth, The Dirt is ultimately committed to hitting the beats it has to. There’s tension in the group; there’s tragedy that befalls at least one member. There’s substance abuse, there’s a bad album, there are financial problems and a perplexed manager and a stressed-out A&R guy who needs a hit, and The Dirt plays into all this shit with a completely straight face, as if it didn’t just spend 45 minutes showing us its protagonists barfing on strippers, kicking each other in the nuts and setting curtains on fire. The bad wigs stack up and suddenly the montages of guys acting like absolute assholes are replaced with montages of these very same guys staring sullenly out of windows. The Dirt asks us to suddenly expect a lot of these knuckleheads that literally presented themselves as semi-talented knuckleheads when we met them.

It goes without saying that any music biopic has to somewhat shill for its own subject. One of the most painful clichés of the genre is how any and all creative output by the subject of a film has to be handled as if it were puffs of distilled genius emanating from their ass. In this case, I think even Mötley Crüe themselves would agree that their actual musical output is of varying quality and, while they have quite a few jams, they hardly have anything in their catalogue that would warrant the scene where one character off-handedly says something and it winds up being the chorus of their biggest hit. The Dirt is remarkably humble about the cultural influence of the Crüe in the grand scheme of things — they were a huge band for a very specific time period, after which they found themselves somewhat talented musicians with horrible addictions and nowhere to go. That lasts, at least, until the last 10 minutes, in which the film takes a sharp turn and tries to argue not only that the band has unparalleled cultural relevance, but that they continued to have it until their farewell show in 2015. This, of course, goes hand in hand with the fact that the band has apparently reformed — certainly long enough to contribute some questionable songs to the soundtrack in which, Will Smith-like, they comment on their own stories through the medium of song.

I know in my heart that it’s impossible that Mötley Crüe would sign off on a biopic of their glory days that would make them look absolutely buffoonish. I know that, as ridiculous as Vince Neil and Nikki Sixx now appear to be in 2019, they were once extremely cool and successful and beloved and that a film about their lives would be remiss if it didn’t try to convey that. But as naive as I am, I really did think that this one was going to go a different route. I really did think that it was trying to present the utopia of rockstardom in a slightly different way — in a slightly more knowing, less enamored with their own farts way than something like Bohemian Rhapsody. I suppose the pull of the whole rock star myth is difficult to resist; perhaps it has a firmer grip on our psyches than I ever imagined. Perhaps it’s impossible not to make a movie about a hard-partying rock band and not have it turn out this way every time.

I don’t know. Ask me when the Bon Jovi movie comes out. ■

The Dirt begins streaming on Netflix on Friday, March 22. Watch the trailer here: