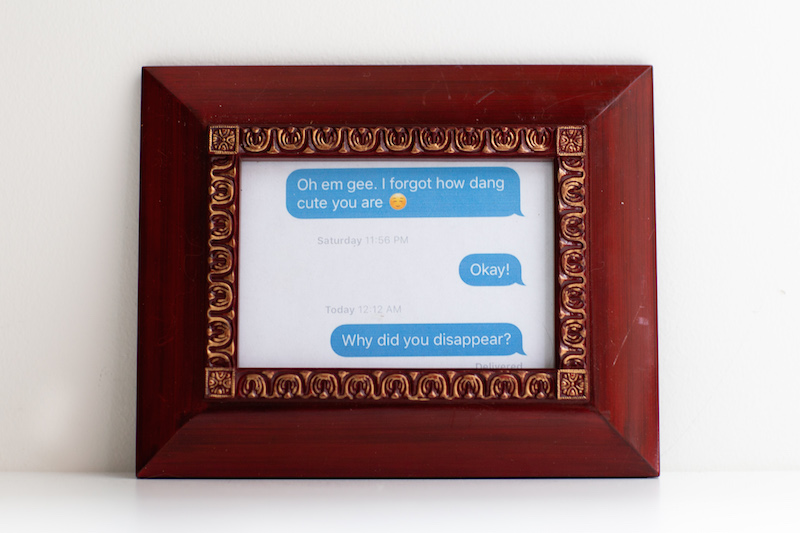 In the parlance of our times, to “ghost” someone is to straight-up disappear on someone with whom you were at least somewhat (and in some cases deeply) romantically involved with nary a word or a gesture. (The OED — yes, “ghosting” is in the OED — definition is a bit more sterile: “The practice of ending a personal relationship with someone by suddenly and without explanation withdrawing from all communication.”)

Thing is, literally zero people reading this will have needed those definitions. Ghosting is so prevalent and widespread that everyone knows what it is even if they’ve never experienced it themselves.

Artist Zeynep Kecelioglu‘s friend getting ghosted led to her thinking a bit more about the phenomenon, which after a few twists and turns led to “Are you ghosting me?” Last week, the two of us discussed why ghosting is a thing and why a little archival project led to a full-on exhibition inhabiting Espace Pop until V-day.

Dave Jaffer: It’s very interesting to me that ghosting is a thing because I don’t get it. Of course I get it, and I get that it’s hard to have a hard conversation and it’s easier to just slink away, but is that why you think people do this?

Zeynep Kecelioglu: I just think that people usually prefer to take the easy way out. So if you’re in a certain interaction where you don’t consider it to be a relationship then I think it’s easy to just run away from confrontation.

DJ: Why do we think that confrontation is necessarily going to happen, though? Why have we been conditioned to think that those things (i.e. breakups of various types) are necessarily confrontations? Also, ghosting seems like something that white people do to each other, that young white people do to each other. I don’t mean to offend, but it seems like [ghosting] is part of North American culture more than it is part of world culture.

ZK: I definitely agree with that because I got most of my last screenshots on Reddit and most of the contributions were from the Western world. I don’t necessarily think it’s the white thing; it’s more the Western thing. It’s a cultural thing as well, right? Higher barriers to empathy. Individualism, which is more prevalent in North America — in good and bad ways.

ZK: I think it’s more about emotional maturity and emotional strength, which relates to self-respect, but I think it’s more [about] running away from that tough, hard conversation — which isn’t always the case always, right? When someone tells me, “I’m not interested anymore” after two dates, I’m like, “cool, yeah, thanks for letting me know.”

DJ: And it’s two dates, right? To me, if anyone has two dates with someone and that person feels like a heel for saying “this isn’t exactly what I’m looking for,” what does that really say about contemporary mores about dating, romance, sex or whatever? To me, that would be incredibly presumptuous. It definitely says, “I can’t have a conversation about how I don’t want to be around you because I know that will break your heart — so I’m just not going to have it.” Maybe that’s not quite the suspicion, but maybe it is.

ZK: I recently heard a really interesting story, on date actually. I was talking about this exhibition and then I asked the guy, “do you have any funny ghosting stories?” And he [had] started dating this girl, and everything [was] going well, and then the girl just sort of disappeared. And he’s very confused. He [was] like, “I thought everything was going so well!” The typical being ghosted [experience] that comes with confusion and not knowing what to do or how to handle things [that] deflates your ego. And so he kind of, slightly resents this woman for the rest of the year. Every time he thinks of her, it’s like “oh yeah, she ghosted me.” Like, screw her, right? And a year later he finds out that she actually died.**

ZK: My point is that ghosting is such a thing that he immediately assumed he was being ghosted.

DJ: It’s easier to assume that someone is ghosting you and not that that they’re dead.

ZK: Exactly, but this is a phenomenon that has existed for the last ten years. It happened so quickly.

DJ: The way that I was raised, within certain artistic traditions, dictated that we have to take art very seriously and make very serious art, and I’ve never been on board with that. So when something comes along, like this, which is alternatively quite serious — when you think about people’s feelings and the larger questions about culture, romance, sex, and dating — but also not something to be hung in a museum with 1,000 press people, I’m quite happy. What drives you to make this kind of art that exists in a moment in time and is somewhat ephemeral?

ZK: It’s exactly that approach that I’m trying to take, because I’m trying to look at art in a less serious way. Because I grew up with that as well. When I told my father that I was going to have an exhibition, my father was like, “so you’re going to hang a bunch of Picassos.” That’s a very traditional approach. Art is a very personal thing. It’s like asking people “what is love?” You’re going to get a very different response [from person to person]. It’s something that’s very difficult to describe.

My starting point was I wanted to give Montreal a gift. That’s how it came to be. The idea has been on my mind for a while. I was reflecting on questions of giving and receiving and my relationship with this city, and I thought why don’t I just give it a gift, why don’t I just create a space, and at the time I didn’t really know what it would be. I didn’t really know if it was going to relate to art at all. I was letting this question sit at the back of my mind, and then honestly a friend of mine got ghosted in a hilarious way and I just thought it was so funny. It started as an archive project for me — I wanted to collect cool, interesting ghosting stories. And then once I had enough, I started thinking about how to present them, and that’s when an art exhibition came into play. It didn’t really start that way. ■

* I recognize that in many cases women ghost men out of concerns for their safety, which, given the state of contemporary masculinity, is understandable and pragmatic. I recognized the need to clarify this after I had transcribed my interview. I left the original quote intact because I think it’s important to highlight how narrow-minded my knee-jerk reaction to ghosting was because I did what I think a lot of dudes do — assume that ghosting is strictly about decency and character and not about agency and self-preservation.

This interview has been condensed and lightly edited for clarity. Are you ghosting me? is at Espace Pop (5585 Parc) until Feb 14. For more information, please visit the artist’s website.