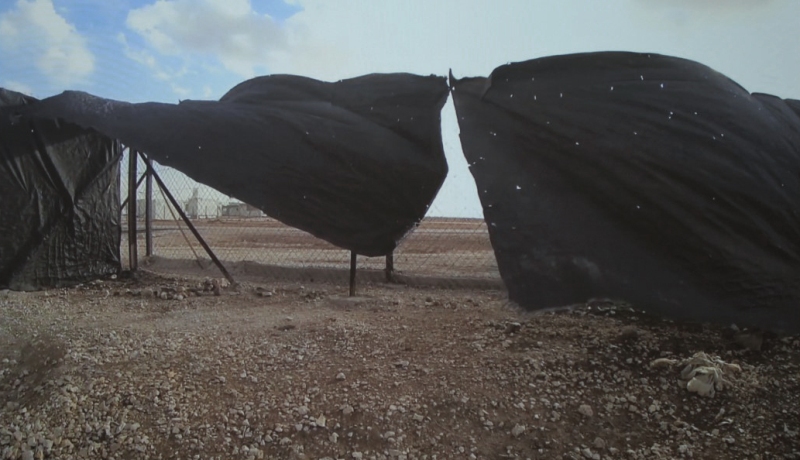 In the back of the Galerie de l’UQAM, a thin rectangular strip of video is projected at the top of a dark room. It shows a blue sky and, periodically, a ball crests what increasingly feels not like the projection’s edge, but like a high wall. Little girls, unseen, talk about playing games, and about how long they’ve been stuck there, in a war camp.

Making war comprehensible to people who only understand it as something that happens to other people is one of the daunting goals of Montreal-based Iranian video and installation artist Leila Zelli. Zelli is this year’s winner of the Impressions Residency, a project created by the Museum of Fine Arts and the Conseils des arts de Montréal that seeks out an emerging non-white Montreal artist to explore the museum’s collections and produce a work about them.

I spoke to Zelli on the phone earlier this month. 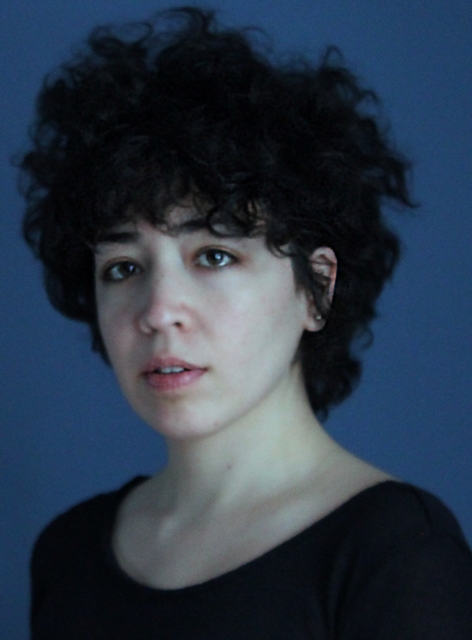 Nora Rosenthal: Congratulations on Terrain de Jeux. For those who aren’t familiar with your work, could you start by talking a little about the show and what motivated you to make this work?

Leila Zelli: With pleasure. In general what interests me is the paradox of life in wartime —  the moments of joy and hope, of life despite destruction. We understand war as destruction, but I’m trying to show it differently, to go find, for example, moments we don’t see on TV or in the news. For this show I watched documentary films that last, say, 45 minutes and I tried to find the two seconds where we see a child playing or a plant that’s still living. I took these images and I put them on loops so that they last, to give them more importance — these moments that are otherwise lost in the documentaries. What I did was a digital in situ installation that’s composed of video and sound.

[Along one wall of the gallery there’s a hidden second wall, visible to us only through tiny holes that register, immediately, as bullet holes. To see the video loops, you have to press your face against the holes, and in one case step up onto a concrete block to peer through.]

NR: I was wondering, because I was drawn in by the unusual point-of-views in these video loops: this particular girl, this soldier’s shoes. What was the process like sifting through all this footage? How long did it take?

LZ: I’m just finishing my Master’s at UQAM in media arts, and I started my Masters with this subject of conflict in the Middle East and subjective reporting surrounding conflict in the Middle East, so I did this research over the course of two years, during which time I did other work as well. But in this case it’s been maybe one year that I’ve been reflecting upon and working on [Terrain de Jeux].

NR: So, I’ve seen some of your other videos that in a large majority reflect aspects of war. For viewers who haven’t lived through war or who aren’t so close to these subjects, what do you want them to take away with them after seeing your videos?

LZ: To be honest, all my work is trying to reduce the distance that we feel relative to “the other.” So if we see someone who’s living through war who’s still living … for instance we can never go stop war but maybe we can be more understanding, have more empathy towards those living through war. I’m questioning two kinds of frameworks in my work: mental frameworks of judgment, prejudice, experience, beliefs, habits, but also image frameworks. What we show, what we don’t show, what we see or don’t see. Or what we want to see or don’t want to see. Voilà.

NR: I’ve seen your image collage Horizons Incertains, so the fact of your having been chosen for a residence at the Museum of Fine Arts with a big element of archival research doesn’t surprise me, but what are your plans? Have you had the chance to investigate the objects in the collection?

LZ: First, Horizons Incertains was a collaborative effort, so I did it with three other student artists. [Guillaume Pascale, Nicolas Dufour and Elise Lafontaine]. We said, okay, for Nuit Blanche we’re always immersed in joy, in fireworks, in light, so we wanted to make a parallel with people who live though war and who see, for instance, bombardments. And for us who haven’t experienced war, maybe that looks like fireworks. Elsewhere for instance, on the Gaza Strip, there are people who go to watch the bombardments as if they were fireworks.

LZ: Yes we didn’t imagine this. It really comes from a report I saw on this subject. To answer your question about the residence, I started yesterday, so it’s very new. Yesterday I lost myself in the museum. But today for instance I’ve started researching the collection of Persian art, of Iranian art. Right now I will focus on works that aren’t in their permanent collection, works that people haven’t seen, works that are considered less important or that are fragmented. What interests me in my work generally are forgotten moments or moments that aren’t important in their original context so I’ll be continuing in that spirit during the residence. ■