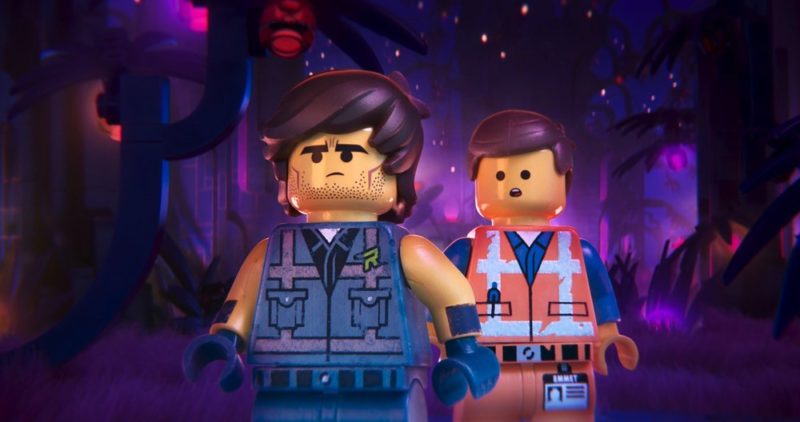 It’s kind of a low bar to clear, but both The LEGO Movie and The LEGO Batman Movie are probably the best movies ever made with the sole and express purpose of selling toys. Both of those films would have been hits based on the sole appeal of Lego as a brand, and they fully did not need to go deep into ideas of the nature of play and deconstruction of the superhero myth, respectively. Like any blockbuster that surprises, however, my impulse is to assume that lightning only strikes once and that any attempt to further stretch it out is ill-advised. I’m not the guy making those decisions, as you can plainly see, so here we have The Lego Movie 2: The Second Part, a sequel that picks up exactly where the original left off: with our heroes destroyed by the wrath of Duplo wielded by the protagonist’s younger sister (played by The Florida Project’s Brooklynn Price).

Halfway through the first film, the “LEGO action” was revealed to be the play of a young boy who got into his father’s pristine LEGO and started messing with their pre-ordained roles. (The fussy dad, played by Will Ferrell in what turned out to be a “surprise” live-action scene, was a LEGO purist who built sets and never played with it, let alone mixed the sets together.) The Second Part leans harder into this metatextual element, exploring the traumatic moment in which a kid has to share their private mind garden with a younger sibling that has become old enough to participate in the games they once could only watch from afar. It’s interesting because it taps into an insanely specific aspect of childhood — and one that’s not really likely to reach the kids actually watching the movie. Constant bickering and fights and misplaced jealousy are a common thing for any group of siblings, and I can tell you that no LEGO movie would ever have put things into perspective enough for me to stop bickering with my brother.

That’s what happens in “the real world” of The Second Part. In the LEGO world, the previously-awesome megapolis of Bricksburg has turned into Apocalypseburg, a more mature and gritty post-apocalyptic landscape that has been in ruins ever since the Duplo showed up. Emmett (Chris Pratt) is just about the only happy-go-lucky denizen, as everyone has turned dark and broody to fulfill audience expectations. Things take a turn when a bizarre alien spaceship shows up and snatches Wyldfyre (Elizabeth Banks), Batman (Will Arnett) and a few others and takes them into a different dimension — the Systar system, a glittery, pop-song-encrusted hellscape run by Queen Whatevra Wana-Bi (Tiffany Haddish), a shape-shifting pink creature whose goal is to ensnare Batman in a matrimonial ceremony.

It’s both a strength and a flaw of The Second Part that it seems to want to reach an even-larger swath of audience this time around. The first film had a “carnage for the kids, meta jokes for the adults” approach; both are still here, but with simple sight gags for pre-verbal kids and a pronounced increase in nerdy meta-references. It’s nice, I suppose, that you can bring the entire family to see this and find something for everyone, but more crucially, there were more aspects in this second version that fell flat. At some point in the film, Emmett a guy named Rex (also played by Chris Pratt) who represents the kind of cool, grown-up and manly version of himself; Rex is more or less an analogue to the ripped, less fun version of Pratt — a joke that the film spends a surprisingly large amount of time on considering there are kids in the audience who were probably not even born for Fat Pratt. On the other hand, the character of Rex is a raptor trainer and his raptors are given jokes in subtitles that are so terrible, they wouldn’t even be in dollar-store joke books in the ’90s. The reason for that, I realize, is purely functional — if little kids are going to be watching this, then you can’t expect them to grasp subtitle jokes that are more than a couple of words long. I suppose animated movies for children have more or less always taken a “one for the kids, one for the parents” approach to jokes, but the divide is more evident in this film than the rest of the LEGO franchise.

Freedom remains the film’s best asset; the boundaryless possibilities of the LEGO world are very well exploited by screenwriters Phil Lord and Chris Miller, and knowing that anything can happen at any time and still “work” in the universe of the film holds a great deal of appeal. In fact, the screenwriters seem to take great pleasure in leading us down confusing and seemingly terrible narrative paths before sending us back on our way. Even if The Second Part rarely feels as fresh as the first one, it’s still probably the third best film made expressly for the purpose of selling toys. Worrisome as a symbol of late capitalism, I suppose, but you gotta take your fun where you can get it. ■

The LEGO Movie 2: The Second Part opens in theatres on Friday, Feb. 8. Watch the trailer here: