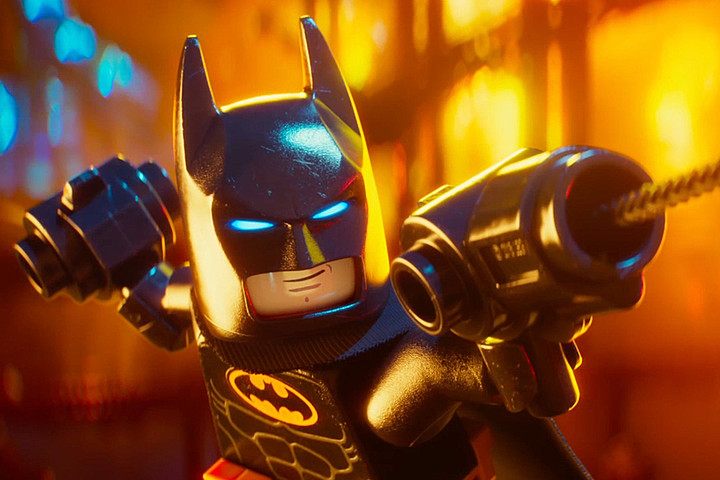 Lego Batman, voiced by Will Arnett

It’s been sort of widely accepted that Star Wars was the first movie to sell an inordinate amount of toys. The runaway success of ancillary products meant that every other Star Wars movie was also going to be made with merchandising in mind. This then led to a spate of movies in the late ’70s and throughout the ’80s that were based on existing toys — the toy was now theoretically selling the movie (though in some cases, it became almost impossible to determine what came first). That’s more or less the position The Lego Movie found itself in: building a movie from a toy that not only has already existed and delighted children for decades, but building a franchise from a game that offers limitless possibilities.

The mere existence of a LEGO Batman movie would have seemed inconceivably cool to me as a Lego-loving youth. It would also have been almost impossible to create in that climate, and yet the current pop-culture smorgasbord clusterfuck makes LEGO Batman not only possible but somewhat relevant. The LEGO Movie seemed designed to celebrate product and franchises but turned out to be a covert celebration of the joy of playing. In that same vein, The LEGO Batman Movie feels like it’s going to chip off some zaniness and keep that going for a while, when in fact it happens to simultaneously be an excoriation of the superhero genre, a silly movie for children AND a more emotionally grounded Batman movie than the aberration released last year.

Batman (Will Arnett) is a very cool guy. He has tons of gadgets and shredded abs and the love of Gotham, but his everyday is pretty dull. He lives alone in a giant manor, his every whim is catered to by father-figure Alfred (Ralph Fiennes) and he forever lives in the shadow of his parents’ death. His biggest enemy, the Joker (Zach Galifianakis), wants nothing more than for Batman to acknowledge him as his biggest/best enemy, but Batman can’t commit to even that.

Things get complicated when the Joker decides the best course of action is to surrender, hoping to be locked up not in Arkham Asylum as is the custom, but instead to force Batman to banish him to the Phantom Zone, that cloud-based prison where Batman’s most annoying ally Superman (Channing Tatum) has just banished Zod. The Phantom Zone is where all of the worst bad guys from all walks of life — not just DC properties — are being held, and with access to them, the Joker can actually defeat Batman once and for all. With the help of Gotham’s new police commissioner Barbara Gordon (Rosario Dawson) and Dick Grayson (Michael Cera), the orphan he accidentally adopted, Batman must prevent the Joker from putting his evil plan into place.

It’s all silly, of course. The Lego Batman Movie operates on a level that can easily be understood and enjoyed by little kids, working its way to a pat moral (“friends are a family you can choose for yourself”) through often chaotic, hypercaffeinated action scenes. Yet, it presents a more nuanced and interesting take on the Batman character than Batman v Superman: Dawn of Justice, even if its approach to Batman’s constant brooding and glowering is clearly intended to mock the conventions of Batmans prior. The LEGO Batman Movie operates under the notion that, as a superhero with no actual superpowers, Batman is beholden to never actually catch his enemies — that without enemies, Batman is just a crazy billionaire with too much time on his hands.

An unnecessarily large amount of The LEGO Batman Movie’s jokes hinge simply on references; there’s pratfalls and hijinks for the kids, but it seems like the vast majority of the “here’s something for parents, too” humour is content with simply chucking a Gremlin or Dalek at the screen and letting people emit a knowing laugh of recognition. It’s a little inevitable for a movie called The LEGO Batman Movie to become enamoured with reference humour — it is, after all, the perfect vehicle to do so — but it somewhat dampens the impact of the film overall.

That having been said, The LEGO Batman Movie is a lot more fun (and a lot more self-aware) than its purely mercantile origins may suggest. Poking fun at the genre’s propensity for overdosing on villains and stuffing the cast with as many recognizable names as humanly possible, it’s a breezy yet overstimulated watch that bodes well for the continuation of this franchise. ■