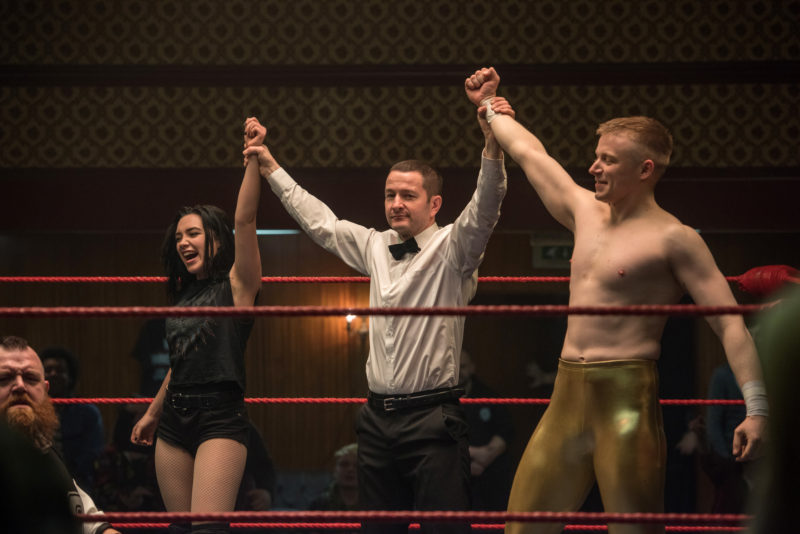 Florence Pugh and Jack Lowden in Fighting With My Family

WWE Studios has existed since 2002. Their output has been varied, alternating between family-friendly movies and action films (with the odd, misjudged prestige-y genre movie sometimes thrown into the mix) that no one seems to like but nevertheless turn a tidy profit thanks to the presence of WWE superstars in lead roles. So far, WWE Studios has mostly served to further and diversify the careers of its roster of stars; somewhat perplexingly, WWE Studios has never made a fiction feature about wrestling before now. Fighting With My Family (directed by The Office’s Stephen Merchant and based on a 2012 documentary) is nominally a biopic of WWE diva Paige, a working-class British wrestler from a wrestling family who became the youngest-ever Divas champion at the age of 21. But what Fighting With My Family actually ends up being as it careens away from its roots as an honest-but-genial kitchen-sink comedy is a very glossy advert for the company that produced it.

Saraya Knight (Florence Pugh) grew up in Norwich, the daughter of a couple of rough-and-tumble ne’er-do-wells (Nick Frost and Lena Headey) who turned to wrestling as an antidote to crime, addiction and homelessness. Saraya’s parents run a sparsely attended gym where she trains with her older brother Zak (Jack Lowden), helping keep local kids off the street and dreaming of stardom in the WWE. When a recruiter for the WWE (Vince Vaughn) comes to the U.K., Zak and Saraya are delighted to learn they’ve been picked for tryouts — but much less delighted when it turns out that only Saraya will move forward, seemingly dooming Zak to a dead-end life in Norwich. Saraya goes to training in Florida, where her rough-hewn country goth ways clash heavily with the other women selected (most of which are models or dancers with no wrestling experience) and the gruelling reality of day-in-day-out training.

Fighting With My Family is, at least for its first half, rather honest about the extremely slim chances of anyone ever making it as a wrestler. It presents the scrappy hand-to-mouth reality of wrestling outside of the highest spheres as a destructive passion where your body goes through extreme trauma hoping for a day that will never come. It’s also quite good at laying out the appeal of professional wrestling, beyond its obvious pitfalls: the exhilaration of pulling it off, the roar of the crowd, the determination etc. Of course, this film is under no obligation to be a hard-hitting exposé of the seedy underbelly of the wrestling world. (If anything, Darren Aronofsky has more or less made sure that no one is going to attempt that for a while.) But as it moves away from genial, chillest-Mike-Leigh-movie-imaginable dramedy and into a more familiar underdog sports formula, Fighting With My Family starts to let off the familiar stench of corporate propaganda.

Dwayne “The Rock” Johnson is on hand in an extended cameo as himself, a benevolent superstar wrestler who offers advice to the star-struck Paige. Johnson fulfills his role as the WWE’s charismatic stooge, but his presence in the film is symptomatic of a more nefarious and insidious approach to the material. By the halfway point, the film stops having heart and starts pushing Heart, a more cynical and glad-handing idealized version of it that presents the WWE as a utopia accessible only to the very, very best. This is kind of gross but expected; frankly, there aren’t too many corporations that fund hit pieces on themselves, and the WWE is particularly cocky about its own self-image. What really sinks Fighting With My Family is the fact that it begins as a behind-the-scenes look at what it takes to become a professional wrestler and slowly morphs into an actual wrestling plotline. It goes deep into showing us that wrestling training isn’t just about being fit — it’s about selling the hits and cutting promos and being a well-rounded sports entertainer… but when Paige actually hits the ring, it’s depicted as this mostly-improvisational power struggle with outcomes unpredictable to everyone, most of all the two people fighting each other. This idea that Paige is wholly unprepared for what she’s about to do, that she hasn’t rehearsed promos or really been made privy to what’s about to transpire is frankly insulting to audiences and puts a damper on the whole thing.

Fighting With My Family gets by mainly on the charisma of its performers and the attention to detail given at the granular level. Pugh and Frost are standouts, managing to infuse their characters with perhaps more personality than the film even gives them. (Paige isn’t necessarily the most personable character imaginable — the suggestion being that she’s been so invested in wrestling for her entire life that that’s essentially her personality.) Merchant gives it a loose and amiable feel that sands off the edges for mass consumption but also gives the movie an appreciably lived-in feel. Unfortunately, the looming spectre of the WWE and its obsessive desire to preserve kayfabe (the implicit convention that suggests what happens in and around a wrestling ring is authentic) at all costs continually hinders it. It’s frankly inconceivable that a story as niche as this one would be produced without the WWE’s horsepower behind it, but it would also be the best possible outcome. ■

Fighting With My Family opens in theatres on Friday, Feb. 22. Watch the trailer here: 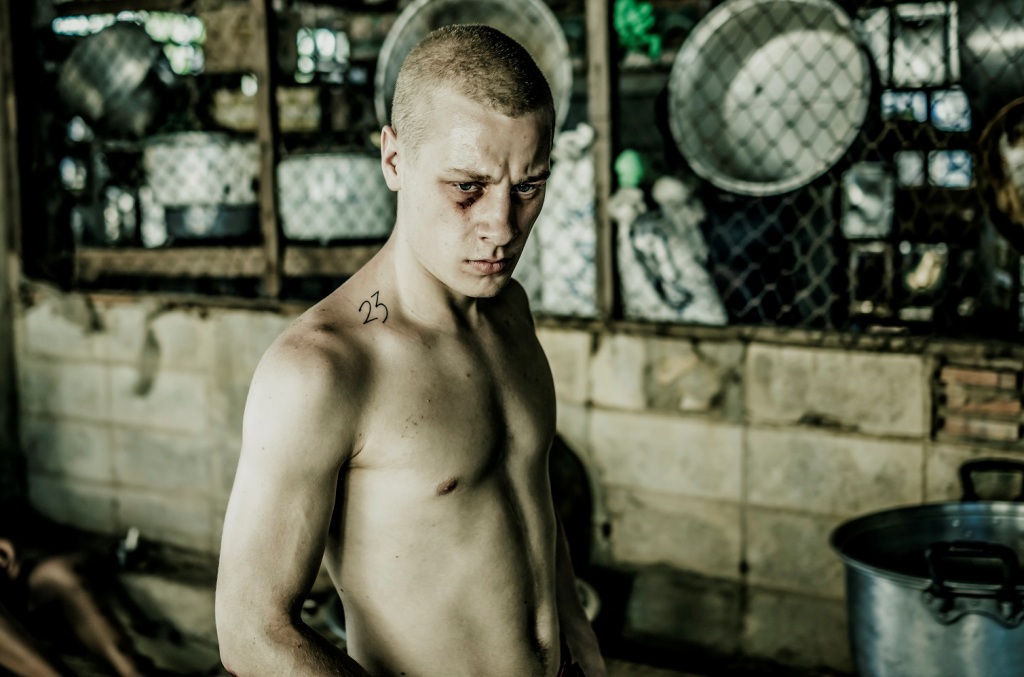 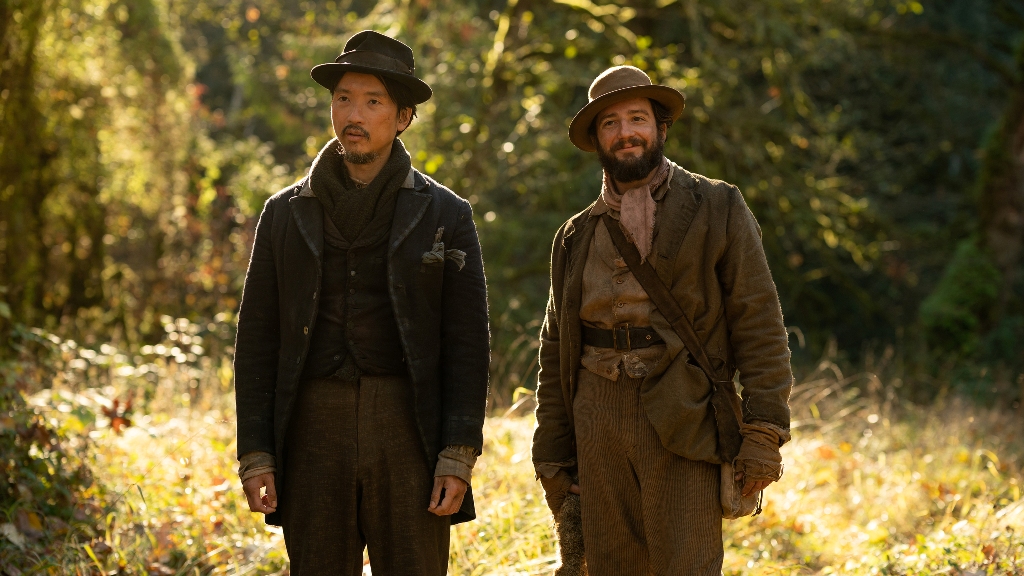