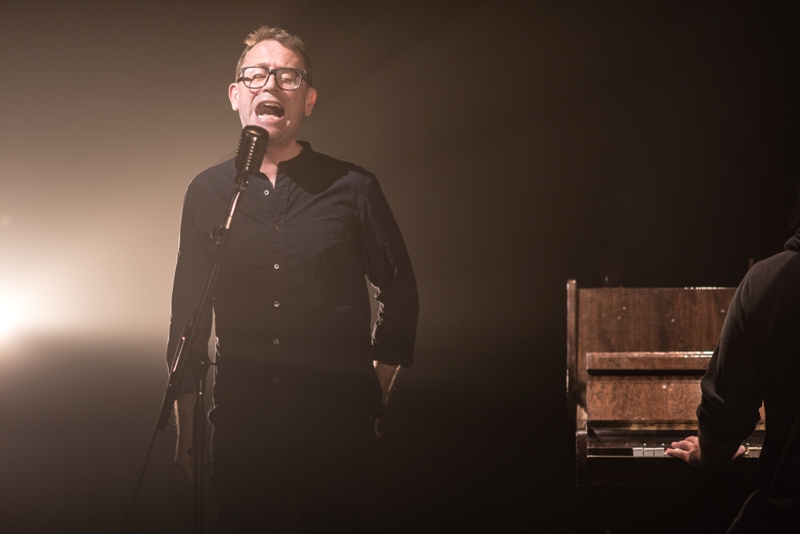 There are a few things you might not know about Torquil Campbell.

The thing you probably do know about him, if anything, is that he’s the singer for indie pop band Stars, which (to give appropriate propers) he co-fronts with Amy Millan. As a child, Campbell was a professional actor through the 1980s and ’90s, later taking bit parts on Law & Order and Sex and the City to supplement being in a band in the early aughts. Though he and his bandmates have mostly been based in Montreal since 2000, he now lives in Vancouver with his actress wife Moya O’Connell and their daughter. He’s back in town this month, however, taking a brief break from music to spend some time on stage at the Centaur. True Crime, developed by Campbell and director Chris Abraham of Crow’s Theatre (in collaboration with musician Julian Brown), was performed last winter in Toronto, and while it’s technically theatre, Campbell says his role is more storytelling than acting.

“Other people might disagree with me, but this isn’t acting,” says Campbell. “Acting is a very different thing, I think, and generally involves other people, which is my problem with it. [True Crime] is me doing what I do, which is desperately trying to stay alive while on stage.”

Part of the play’s narrative is the story of con-man Christian Gerhartsreiter, aka Clark Rockefeller — what drew Campbell to this man and his crimes is the focus of the play.

“It’s me asking that same question, and I’m not sure I’ve ever really answered it other than to say that I’m not entirely well as a person.

“I’ve always been obsessed with true crime stories, long before everybody else,” he says, copping to never missing an episode of Unsolved Mysteries, 48 Hours or Dateline as a teenager, on top of reading loads of books about specific cases.

“[Christian Gerhartsreiter] became famous because he was a fake Rockefeller and attempted to kidnap his child. I recognized him when I saw him [on TV], and it suddenly occurred to me that I had seen him on Unsolved Mysteries about 25 years earlier, wanted in questioning on a completely other thing. I started to get very involved with him at that point. A book was written about him that I found very fascinating [Name Dropper by Frank C. Girardot], and that’s when I decided I would write to him.”

What differentiated Gerhartsreiter’s story from other cases Campbell had been following was a strong physical resemblance between Campbell and the con-man, and the fact that Gerhartsreiter was playing the role of someone a lot like Campbell: “an effete East Coast preppy WASP.”

“I won’t tell you what happens next — if I say any more, the play is ruined,” says Campbell. “It’s about me and it’s about him, and it’s about what he did to me and what I did to him.

“It’s also a lot about our era. We didn’t start out thinking it was going to be a political play. We just thought we were writing a play about someone who loved lying, but then the biggest liar ever got elected President of the United States and lying became a very topical subject, so it took on a kind of weight that we weren’t aware it would have.” ■