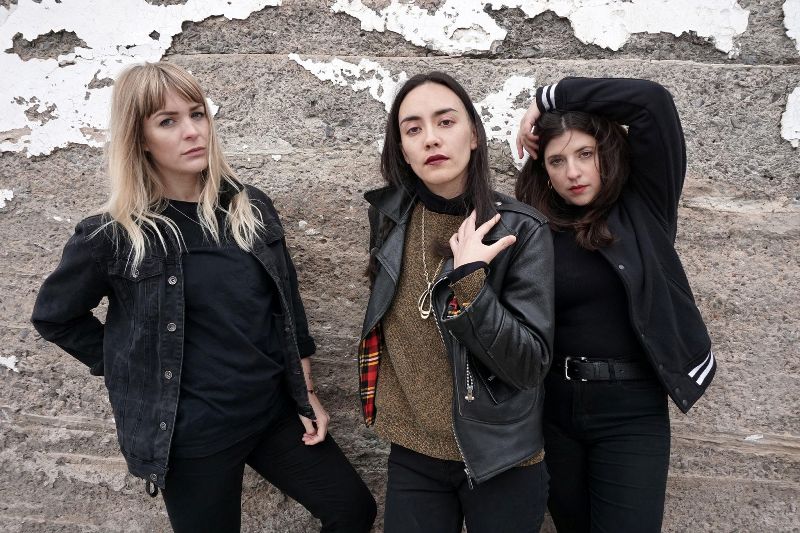 Heather Hardie (lead guitar), Helen Chau Bradley (vocals, guitar) and Nikki MacMillan (drums) were first introduced in 2012, when their names were drawn from a pool of 40-some adults participating in a Band-Off fundraiser hosted by Rock Camp for Girls, a grassroots, self-funded summer camp for girls and gender non-conforming youth with an interest in rock music and performing. Each band drawn is given one month to practise and prepare a set before participating in a weekend-long string of shows, with all proceeds going to the camp.

“I think it was the following year [after the fundraising performance] that we actually formed the real band and had our own name,” says MacMillan.

Despite sharing a first name with the project, Hardie insists that, beyond being initially inspired by the 1988 film starring Winona Ryder, the title of the band has little significance and came about by way of necessity.

“I think we had a show and we were like, ‘Oh my God we don’t have a band name, let’s just kind of do like a joke-y band name’ and we picked Heathers,” Chau Bradley says. “And, of course, here we are six years later…”

Heathers’ first recording was a self-titled seven-track LP released in December 2014 on their Bandcamp. Influenced by artists such as the Cranberries and PJ Harvey, the tracks layer Chau Bradley’s raw vocals over she and Hardie’s buzzing, distorted guitars and MacMillan’s steady, pulsing percussion. Their most recent release, Midnight Is a Place, launched last May. The tracks maintain the moody atmosphere cultivated on the first album, but further elaborate on the noise, introducing textures and tones that make the songs feel at once brooding and cathartic.

Songwriting is a collaborative process between the three musicians, one that has evolved over the years.

“I played in a couple bands throughout my teens and twenties but I feel like this was the band where we all kind of […] became more empowered to really do what we wanted to do,” says Chau Bradley. “I always wanted to be in a louder, heavier band and had never been able to make that happen, and then we all got together. But it’s been kind of a long trajectory of figuring out how to make the kind of noise that we’ve heard in our heads the whole time.”

Since releasing and promoting Midnight Is a Place last Spring — a project almost two years in the making — the artists have been slowly developing songs for their next project.

“We’re always working, always writing, because writing is kind of a slow process for us and for a lot of musicians I think,” says Hardie. “We’re not full time at all, like, we practise maximum once a week, and we have a lot of other stuff that takes up our time. We’re also totally DIY, so it just takes a lot of work and time to get a project like that together without any kind of label backing.”

Though Heathers credit the abundance of musicians in their community as well the availability of affordable practice spaces as elements that make the Montreal music scene more accessible to independent artista, the artists aren’t immune to the recent closure of local mainstays like le Cagibi or Divan Orange.

“Over the time we’ve been together, we’ve noticed just way, way less venues, like places we used to play are closing […] It’s changing here, too” says MacMillan.

The band spoke about the importance of striking the right balance between creating and performing, a process that sometimes involves being selective in the shows they choose to play.

“I feel like it’s easy to feel like you have to say yes to anyone who offers you a show, without really considering what that looks like in the timeline of a year,” says Chau Bradley “That being said […] we really like being a live band, we really like that kind of connection.” ■

Heathers will perform alongside Thus Owls, Lungbutter and Nennen as a part of the Lux Magna festival at Casa del Popolo on Thursday, Jan. 24, 9 p.m., $12/$15