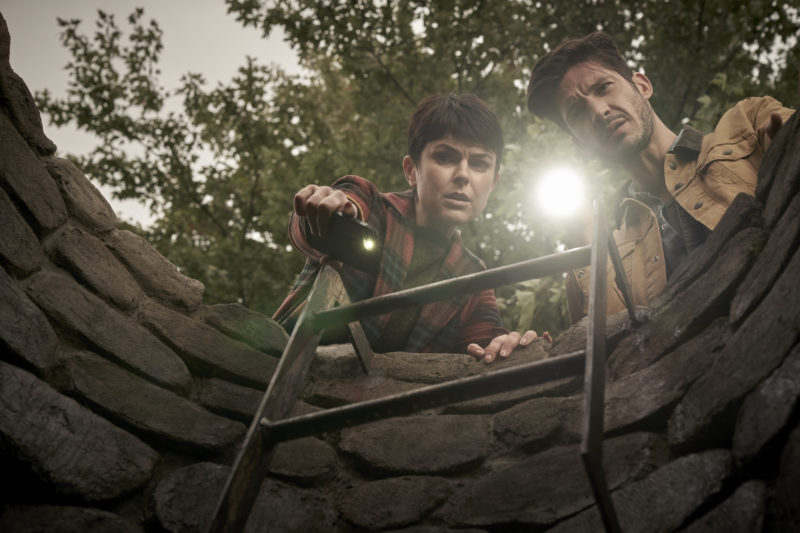 Based on a series of books by M.R. Hall, CBC’s brand-new procedural Coroner stars Serinda Swan as Jenny Cooper, a former E.R. surgeon who becomes a coroner after her world is upended by the tragic and unexpected death of her husband. As it turns out, he’s left Jenny and her teenage son Ross (Ehren Kassam) a pile of debt, forcing her to move out of the city and into a house in the country. There, she meets Liam Bouchard (Éric Bruneau), a veteran who lives in a treehouse in the woods and becomes her love interest. In the first two episodes offered up to journalists, Liam remains a somewhat mysterious figure — already established as a love interest, he does, however, have a darkness about him.

“Liam Bouchard is a veteran who fought in Afghanistan, but he basically gave up on everything when he returned,” says Bruneau. “He’s Jenny neighbour and he lives in the woods, as it were. Coming back from the war, he lives as a kind of outcast, but he eventually starts taking up more and more space in Jenny Cooper’s life, and also in her son’s life. I’m trying not to give anything away (laughs) but he also becomes Jenny’s protector in her professional life — he’s there when she goes in too deep on some cases. What he learned in the army will serve both of them.

“It really did develop during the shoot,” he continues. “It went down some roads I wasn’t expecting. It was rather flattering, in fact — it’s as if the writers were writing for me. I was originally supposed to shoot for about 10 days and I wound up being there for 20. The character developed that way — but we also developed his dark side. In episode five or six, we see more of him and we sort of understand what he went through. For that I met with real Canadian soldiers who went on missions to Afghanistan. One guy was retiring, and I asked him why and he said, ‘Because my nightmares are worse than yours.’ There’s a lot of PTSD within these guys; they can front for a couple of years, but when they come back… what’s interesting is — and it’s not really interesting, but interesting as an actor — is to what extent they’re alone with their demons.”

Coroner is, in many ways, a traditional procedural with one crime to be solved in each episode; generally speaking, that crime is wrapped up by the end of the episode. Where Coroner differs is in how much personal and psychological development Jenny is given as a character.

“I was pretty surprised by it when I read the script,” says Bruneau. “I’ve done shows like this here — things like Mensonges or other detective shows of that nature — and it’s true that her relationship with her son and her personal life takes up more space. But there’s also something to the writing. The tagline in the teaser is ‘Everybody has a secret,’ and that’s really what the show is about. Everyone’s trying to hide their demons. I think that’s what makes these characters interesting and complex. They have layers beyond just being the police looking for clues.”

Coroner is Bruneau’s first experience acting in English on television (he appeared in Stay), which puts him in a rather different position. In Quebec, Éric Bruneau is a star — he leads shows like Le jeu and films like Denys Arcand’s Le règne de la beauté; on the other side of Cornwall, he’s practically an unknown. That’s the case for most Quebec actors, in fact. 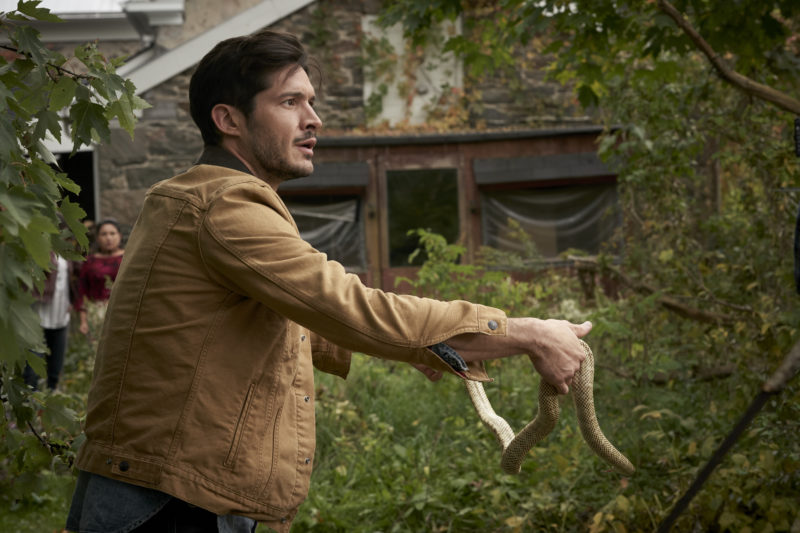 “I’d auditioned for English stuff a little bit when I first came out of acting school,” he says. “But basically I started working in French a lot right out of school. It took up a lot more space in my life. But I love it! I certainly do have an accent, but they were very good about it. I sent in a self-tape for this role after auditioning with the director, Adrienne Mitchell, in person. I told her that I have an accent when I speak English that I just couldn’t get rid of entirely, even if I worked with a coach during the shoot! She told me it didn’t matter, that she wanted me to do it and that they would change the character’s name to make him Québécois.

“What I liked as an actor was to end up with a whole new gang of people who didn’t know me at all; they’d never seen me act before, or very little,” he continues. “That’s what felt fresh and good to me. The fact that it was in English was one thing that I always had in the back of my mind, but when you’re in the moment and in the scene, it’s all the same. If you’ve done your homework, you should be fine. The real pleasure was to feel the same way I felt when I first came out of acting school.”

I bring up the idea that an actor in Quebec can have their face on a bus and be recognized everywhere they go, but if they drive two hours to Ottawa, they’ll be completely anonymous.

“It’s true that in Montreal, we have a very particular situation,” he says. “If you look at the numbers in a Numeris poll, there are French-language shows that are watched by 1.3 million people every day. You can hit 2 million viewers on a total population of 7 million! It’s huge! I’m pretty sure that in the rest of Canada there aren’t any Canadian shows in the top 10 or 20, because they’re so close to the United States. Here, we have our own thing — we have a people’s choice award with the Artis gala, we have the Gémeaux… the system does everything in its power to be favourable to the survival of our TV. We fight for its survival, but it’s strong!”

I bring up something that Maxim Roy said when I interviewed her for the last Denys Arcand movie: having worked a lot in English-language Canadian TV, she said the budgets were exponentially higher than even something as high-profile as a Denys Arcand movie, which surprised me, considering that the cultural footprint of French-language TV shows seems much higher than their English counterparts.

“Oh, man, it’s incomparable,” says Bruneau. “They don’t calculate it based on ratings — they calculate it by the amount of taxpayers. A show like Coroner in Quebec would have about $600,000 per episode; in the rest of Canada, they have about $2.3-million.

“I think it’s purely a cultural thing,” he continues. “Quebec is closer in temperament and in culture to France than it is to the rest of Canada. We’re more into emotions — Canada is more cerebral. Just look at the difference between the two versions of 19-2 — even if a lot of it is the same, the end product is so different.”

When it comes to Coroner, however, Bruneau is pretty clear on what the major difference was.

“Time!” he says. “It’s always a question of time. You could probably extrapolate into this idea that time is money, but a shoot always comes down to being about time. We weren’t shooting 13 or 14 pages a day, we were doing five or six. There are cranes and dollies everywhere — we used cranes on every single day of the shoot! Other than that, ultimately, if you know your lines, your marks in English and your marks in French, they’re the same fucking thing! Be prepared, know your lines and act when they say action!” ■

Classic India in Parc Ex has quietly been serving next-level dishes since Dec. 2018.