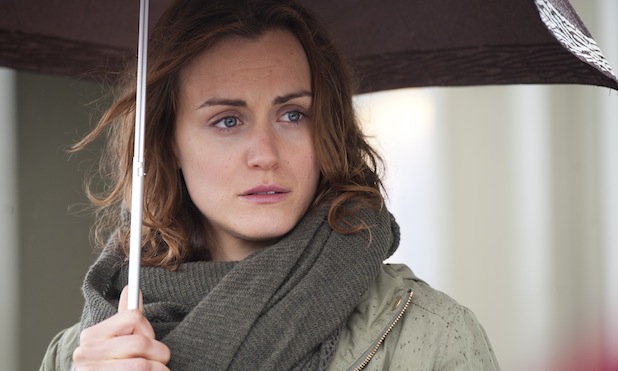 Does Montreal play itself? Yes! Though roughly 60 per cent of the film is spent in rural Ireland near Galway, a not-insignificant portion of the film is set in Mile End.

Most egregious local landmark: The part of Montreal shown is actually pretty small geographically — the entirety of it is contained within Mile End, so we see Dépanneur Café, Drawn & Quarterly and the statue on the mountain as well as a tiny driving sequence that showcases downtown. The main character eventually has an emotional breakdown in front of the carpet store at Villeneuve and Parc, a situation that I’m sure a lot of us can relate to intimately.

Notable local talent: The two major figures in the Montreal section of the film are Taylor Schilling and Michael Ironside. Neither are from here (which is evident in Schilling’s pronunciation of Montreal as Mohn-treal rather than Muhn-treal — a mispronunciation that is most often heard followed by the demand of directions to Schwartz’s), but there are smaller supporting roles for Éric Bruneau (as a bartender) and Pascale Montpetit (as Ironside’s girlfriend). Local folk singer Maerin appears in a concert scene and a couple of her songs can be heard on the soundtrack.

One of the unwritten rules of Made in MTL is that I will never cover Quebec films — this isn’t so much a bias against Quebec films as much as it is avoidance of the obvious. Chances are that most Quebec films shot here will be set in Montreal and contain mostly local talent, so I wouldn’t really be discovering anything per se. Sometimes, though, things don’t go according to plan, and I end up watching a film that, while ostensibly made in Montreal, contains no real evidence of Montreal. This is what happened when I watched the junky horror film Orphan, a film supposedly made here that’s set almost entirely in the country. This put me late on getting the column out, which eventually led me to Stay, a little-known Quebec-Ireland co-production that didn’t make much of an impression upon release but is now waiting to be discovered on Netflix as a suggestion under Orange Is the New Black.

Abbey (Schilling) and Dermot (Aidan Quinn) live in a small coastal village not too far from Galway. He’s a retired (perhaps unwillingly, it is rumored) professor, she’s his much-younger student; he’s happy drinking beer and eating potato chips and puttering around in a sweater vest, her not so much. When she finds out that she’s pregnant (a thing that Dermot is very against due to some bad juju in his past), she decides to return home to Montreal to reflect upon the situation. Her father (Ironside) immediately deduces what’s up and is enthused at the prospect of a grandchild, while Dermot hires a kid (Barry Keogh) to build a fence on his property and helps a local woman give birth during her mother’s wake while also excavating a centenarian corpse from the bog out back. 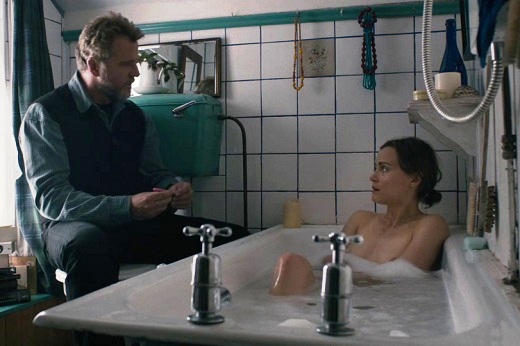 What starts as an intimate look at a May-December relationship grows increasingly serpentine and fraught with subplots as it progresses; this is almost certainly a result of Stay being adapted from a novel by Aislinn Hunter. Novels have tons of space to add color and texture to the story through these kinds of things, but a low-budget international co-production that’s 99 minutes long does not. I haven’t read the original book so it’s difficult for me to compare, but just a look at Amazon’s summary tells me that the book has an entirely different focus that writer/director Wiebke von Carolsfeld struggles to balance out in the adaptation. As the film progresses, it gets further and further away from its initial central concern and gets increasingly lost in minutiae that diverts attention from the main characters.

It’s too bad that Stay loses focus so early on, because there are parts of the film that feel loose and worn-in in the best way possible. The actors generally have a genial rapport, and there are some aspects of the film that are rather well-delivered – but it’s all so unfocused that it’s difficult to truly feel for these characters. Von Carolsfeld (a Montrealer dedicated to getting Montreal on film — her second locally set film is due for release later this year) has a good eye and a knack for directing actors, but the script is simply too messy to work. Stay could’ve made a decent miniseries, but as a film it’s simply okay.

A note about locations: pretty much every Made in MTL movie I’ve seen thus far has fudged geographical locations. Cars will drive down St-Laurent, turn onto des Pins and suddenly be in front of Farine Five Roses; the interior of a building often will not match the exterior. That’s a necessity of filmmaking that’s pretty easy to get over unless you’re a pedantic obsessive, but it’s surprising to see that Stay doesn’t do that. Abbey’s cab ride from the airport works its way methodically from downtown to Parc/St-Joseph; when she walks out of Dépanneur Café, she walks across the street to Drawn & Quarterly. It’s ultimately a measure of not much, but it’s interesting to see. ■