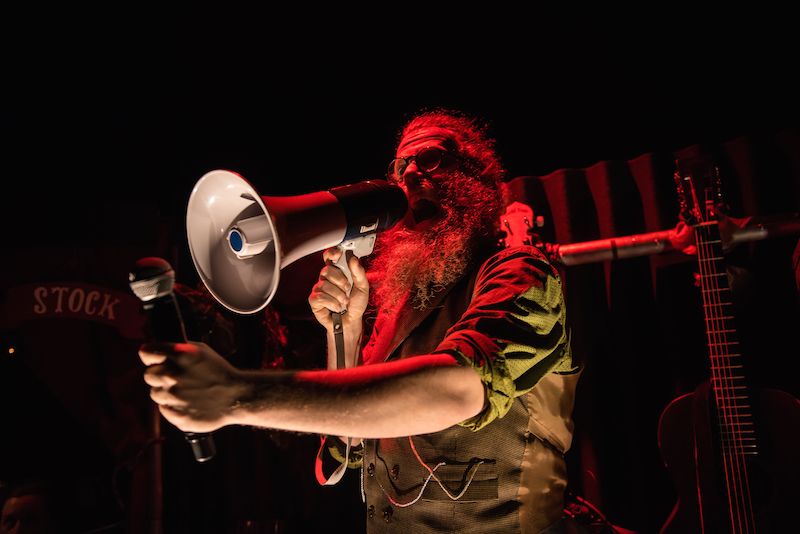 That I saw Old Stock: A Refugee Love Story — at the Segal Centre until Dec. 19 — while possessed of this mood, this feeling, this degree of want-to-be, is a fortunate thing. I was in the precise right place for this miraculous work to hit my feels right in the feels, and now that I’ve broached the thing I want to say I’ll dispense with this overwrought preamble, which was written only so this review didn’t start with something overlarge.

Old Stock: A Refugee Love Story is probably the best thing I have ever seen in a theatre.

Co-created by playwright Hannah Moscovitch, singer/songwriter Ben Caplan and writer/director Christian Barry (whose Halifax-based 2b Theatre originated the work), Old Stock is a wonderful and winning music/theatre hybrid about Moscovitch’s great-grandparents Chaim and Chaya, Romanian Jews escaping dire circumstances in Eastern Europe who met at Pier 21 in Halifax in the early 20th Century.

In Canada, their circumstances are better, but they’re still in the sick line. Does he have typhus or is it just a rash? Does she have TB, or is it just a cough? This is how we meet our two main characters, and informs how we see them for a while.

Chaim (Dani Oore, also on woodwinds) is wide-eyed, optimistic and happy at a chance at a new life. Chaya (Mary Fay Coady, also on violin) is stern and severe. Chaim is looking forward at his new life full of possibility; Chaya is looking back to the place she still considers her home, and to the memory of her late husband, whose body remains there. (Graham Scott on keys/accordion and Jamie Kronick on drums fill out the band.)

By this point we’ve already met Caplan’s character, the Wanderer, who is our guide, our narrator, their bandleader and then some. If Old Stock is a piece of story theatre, Caplan, with his outsize personality, colourful attire, gravelly Tom Waits voice, massive beard and mischievous everything — is our storyteller. The piece goes as he goes, so it’s a good thing that he is energetic and dynamic throughout.

For a while, Chaim and Chaya’s story hits a lot of the standard marks of a love story in a romantic comedy — boy likes girl, girl isn’t so sure, etc. — though to be clear, Old Stock isn’t a comedy.

For a while, the Caplan-led songs are the star (that voice!) and the way we understand things. “Traveller’s Curse,” which opens the show, sets the scene: Chaim and Chaya are attempting and deserve a shot at a better life and it’s only good form to let them take a swing. “You’ve Arrived” and “Intermezzo 1” and “Truth Doesn’t Live In A Book” annotate and reconcile the tensions of Chaim and Chaya’s new lives in Canada, their connection to their religion and their individual truths.

Whereas some musicals (Old Stock isn’t a musical) let the plot bleed into a song that punctuates the scene, this piece is largely driven by its songs, which, while not necessarily narrative, all exist as extended opportunities for Caplan to do his wildman bit and for the gist of the message to be communicated. Caplan repeatedly makes the most of this opportunity; his exceedingly strong and lively performance in his various guises cleverly steers the ship towards and away from conflict as needed.

As musicians, both Oore and Coady are excellent in support. As Chaim and Chaya, they are are as good as the script allows them to be because the characters, while unique, are somewhat broadly drawn. Still, they both make the most of their opportunities to act. Oore’s palpable fragility in a scene recounting the pogroms, for instance, is one of the most devastating things I’ve ever witnessed in a theatre.

That Moscovitch wrote Old Stock kind of gives away the ending — she exists because her great-grandparents persisted and succeeded — but that’s perhaps the point. Old Stock is a wonderful story about real people, and it honours them, but this is a political work that is as much about the here and now as it is about the there and then.

Its title is a reference to Stephen Harper’s 2015 dog-whistle about “Old Stock” Canadians, which served as a disheartening reminder that to some, there is a Canadianness which immigrants and refugees will never be able to lay claim to. And, obviously, it serves as a timely allegory for the trials and tribulations faced by refugees, migrants and asylum-seekers in a world that is seemingly growing  harsher and less welcoming by the day.

But here’s the thing: to enjoy this work as just a play, just a musical, just a piece of history or just an allegory is to miss the point. The genius of this thing is that it’s all of these things and somehow more all at the same time.

“Probably the best thing I have ever seen in a theatre” sounds suspect, hyperbolic, sensational; I know it does. It’s just that I’ve examined everything I thought and felt and this is what has come out, so I’m sticking to it. It’s the best, if only to me, and perhaps only because of when I saw it and what I was open to on that night. That’s how the human experience tends to work, I think.

So, yeah, hyperbole, sensationalism, whatever. Just go see the thing — if only to tell me I’m stupid and wrong if/when you disagree. Call the box office, get your ticket — if there are any left — and go. Just go.

I wrote this review piece by piece over the course of a week because it simply took that long to figure out what to say. I am humbled by critics who can find the words immediately and who have something to say the morning after. For what it’s worth, I’ve always found it infinitely harder to write about something you love than something you don’t. ■