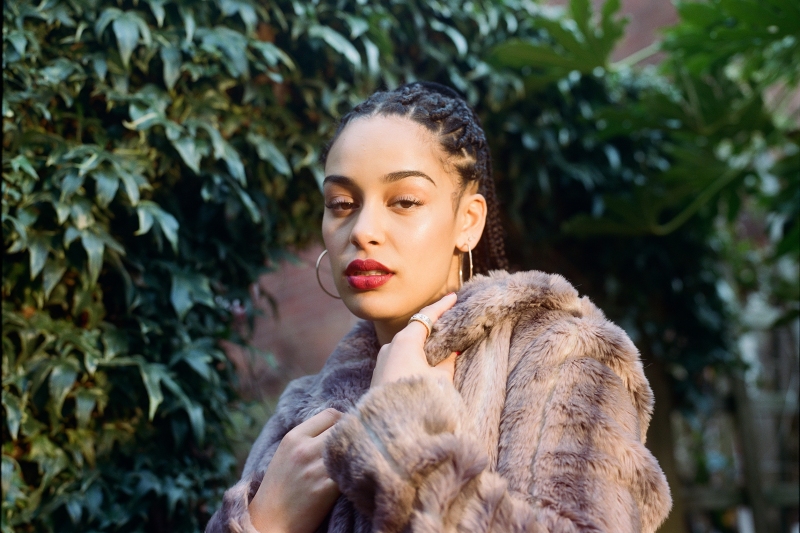 It wouldn’t be much of an exaggeration to say that 21-year-old singer Jorja Smith has had a phenomenal year.

In June, the British artist released her debut LP Lost & Found, and that was after dropping a track on the Black Panther soundtrack, winning a Critics’ Choice prize at the Brit Awards and making her U.S. TV debut. Her rich fusion of R&B and pop has only crystallized since she released her debut single “Blue Lights” nearly three years ago, and as this landmark year and her tour come to a close, Smith is psyched about getting back into songwriting mode.

Lorraine Carpenter: Did you learn anything from your father’s experience in a band that you’ve found particularly relevant in your career so far?

Jorja Smith:  My dad was in a band before I was born so I didn’t get the chance to see anything. But I do remember him telling me how important it is for your band to be tight.

When I lived back at home in Walsall, I would be writing songs in my room or with my keyboard and then record them and play them to my dad. He would give me constructive criticism — which I would hate, but listen to. He would tell me, “I can’t hear a chorus in this one” or “I love it.”

LC: You listed Amy Winehouse as an important early influence on you. Are there any other artists that have had that kind of impact, before or since?

JS: Nina Simone is another artist who I love dearly. They’re both so honest, so vulnerable — their songs can make me smile and cry at the same time. You can hear the pain in each line and believe every word they’re singing. They make you feel like you’re not so alone.

LC: Why did you feel that the title Lost & Found best suited your album?

JS: “Lost and found” sums me up, I think. I can lose myself easily, in love, in thoughts, in songs. But then at the same time I know exactly what I want to be doing; I do exactly what I want to. If you know me well you would agree, too. I thought as this album is my first and an introduction to me, then you should get to know me so far, me growing up.

LC: I gather that the songs on the record were written over a period of time. When you look at some of the older songs now, do you feel that they represent elements of your younger self that you’ve moved on from now?

JS: I do and I don’t. I feel even though I’ve written songs at 17, they’re still relatable now. I’ve definitely learned a lot more and have grown up, I think, from when I first started writing. My style of writing hasn’t really changed though, more the content, as I’m experiencing and learning more. Sometimes when I sing older songs, they’re nostalgic and I can see my younger self making good decisions and making mistakes.

LC: You’ve said that you feel it’s important to speak out about political or social issues in music, to use art as a platform. Is there anything specific going on in the world now that you feel might make its way into a future song?

JS: There’s so much going on right now, it’s hard to keep up. I feel it’s important to speak out about what you believe and have a good understanding of the issues before you start putting your opinions out there. I want to learn more about what’s going on right now, with women, men, the world, everything — I miss not being in school and having to read and discuss things every day.

I’m learning more about mental health as I feel sometimes I forget myself and then I can get really into my head. A lot has changed for me, and dealing with things can be tricky. I’m not very good at explaining anything so I write songs and that’s how I get things out.

LC: Of all the artists you’ve worked with, is there one collaboration that stands out as being an especially good experience?

JS: They were all amazing and individual experiences. Working on “I Am” with Kendrick Lamar was great. To write for a film soundtrack is something I’d never done before, so completely different to what I’m used to. Kendrick let me just freestyle melodies on the beat Sounwave had produced and then we wrote to the melodies we liked. I love writing with people — ideas blossom and change and then when you say one thing, it can spark another idea in someone else. I love that.

LC: What is coming up for you that you’re particularly excited about?

JS: Next year I can start writing again. I’ve been so busy touring, playing festivals and doing interviews that I haven’t been in the right frame of mind to write. It’s frustrating at times. Sometimes the only way to feel better about situations I’ve been in is to write about them, but I haven’t really had the chance. It’s almost like they’re in a traffic jam in my head and soon the green light will come and they will start moving onto paper and into a microphone. ■