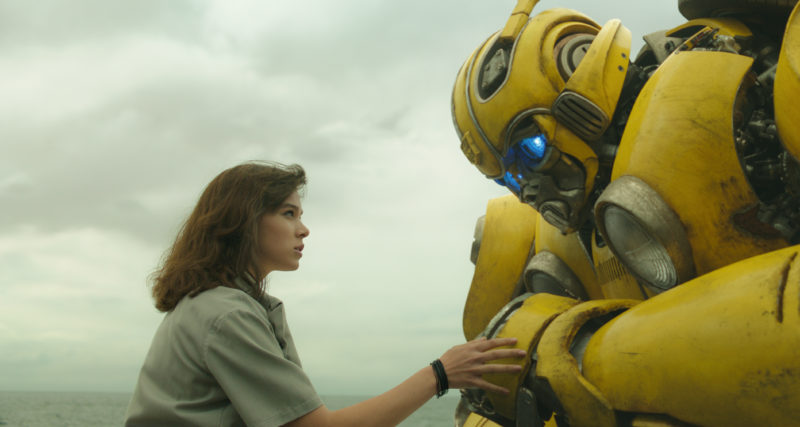 Michael Bay’s Transformers movies are so chaotic and insane that one tends to forget exactly where they came from. After all, the whole thing was just a ploy to sell toys from the very beginning: the most complicated and expensive Sears catalogue alternative ever designed. I imagine kids like the Transformers movies, but they’ve become such lumbering, bordering-on-abstract messes that they seem to stand mostly alone. I imagine they still do their fair amount of toy-selling, but they’ve become this kind of larger-than-life embodiment of everything that’s wrong with franchise filmmaking: soullessly incomprehensible movies made by committee.

To suggest that  is an attempt to salvage the franchise would be to suggest that the five previous films in the franchise were somehow not exactly what the studio had in mind. Instead, it feels more like Steven Spielberg, who has executive-produced every single one of these movies, finally decided to sit in on a meeting — and he had some notes. Bumblebee is definitely the best film in the Transformers franchise, a better Spielberg-touched nostalgia trip than Spielberg’s own Ready, Player One… but that doesn’t make it a particularly great film by anyone’s definition. It took six movies, but the franchise has finally cleared the bar for watchable pop fluff.

Charlie (Hailee Steinfeld) lives with her mother (Pamela Adlon), younger brother Otis (Jason Drucker) and dorky stepfather Ron (Stephen Schneider) in the Bay Area. Being a 1987 teenager, she likes the Smiths, working on cars and… well, I’m sure we’ll get to the other things about her personality in the sequel. Charlie’s one dream is to fix up the old car that her father left her before he died, but she just can’t seem to get it into working condition. On her 18th birthday, she decides instead to turn her efforts towards a yellow VW bug that has been sitting in the scrapyard that she patronizes daily — only to find that the unassuming VW bug is actually a transforming robot from outer space who has been sent on a recon mission to prep the terrain for other robots from his race (Autobots, aka the good guys, I suppose) to face off against the bad guys (Decepticons). What Charlie doesn’t know is that the Decepticons have already made it to Earth, and have convinced Lt. Burns (John Cena) that Bumblebee is the bad guy and that they need the Army’s firepower to neutralize the threat.

Originality is not exactly Bumblebee’s strong suit: it lifts most of its beats from The Iron Giant, its recurring dead-dad stuff from the oeuvre of exec producer Spielberg and most of its needle drops from a Spotify “I Love the 80s” playlist. It’s played tremendously safe, down to a would-be love interest in the form of Charlie’s dorky neighbour Memo (Jorge Lendenborg Jr.), who’s not enough of a dork not to have a scene in which he is gratuitously asked to take his shirt off. And while they’ve brought back the old-school designs more familiar to those who have been with the franchise for the long haul, and somewhat cleaned up the visual clutter of the previous films, the action scenes remain hyper-busy CGI abstractions writ large.

What works in Bumblebee’s favour is how tight and no-nonsense it proves to be for a movie of its ilk. I’m not much of a Transformers fan (I spent what I’ve seen of the previous films in the franchise in a state of confusion) so I can’t exactly pinpoint instances of potential fan service in here, but I did not spot a single moment in which a character does something inexplicable for 15 seconds in order to placate some guy in the audience who wore the right shirt to the screening. (They do play the theme song to Transformers: The Animated Movie in one sequence, but I’m willing to let that slide for the collapsing-universes potential that that unleashes. Imagine a world where an alien-robot invasion was predicted just a year before by a somewhat cheap animated movie with Orson Welles as a talking planet.)

Bumblebee does a lot of nostalgic jazz-hands with its costumes and needle drops (though I would imagine this is the only movie about giant robots to have two Smiths songs, I wouldn’t say this too loudly — don’t want to encourage unhealthy competition) but it does harken back to a time when blockbusters were simpler. Maybe simple isn’t the right word here — maybe it’s just a healthier sense of ambition, propelled by a very likeable performance by Steinfeld.

The genre worship and extremely codified beats of Bumblebee are actually fairly effective. Even though the whole thing is basically just E.T. with a giant robot instead of a small, clammy-looking brown alien, the small scope and natural limits established by the thunderous franchise that follows it (at least in the narrative sense) means it’s a lot easier to take. Granted, it’s kind of a backhanded compliment when the best compliment you can muster for a film is that it’s not as tonitruous and boring as you may have expected, but given the present situation, almost anything is a step up.  ■