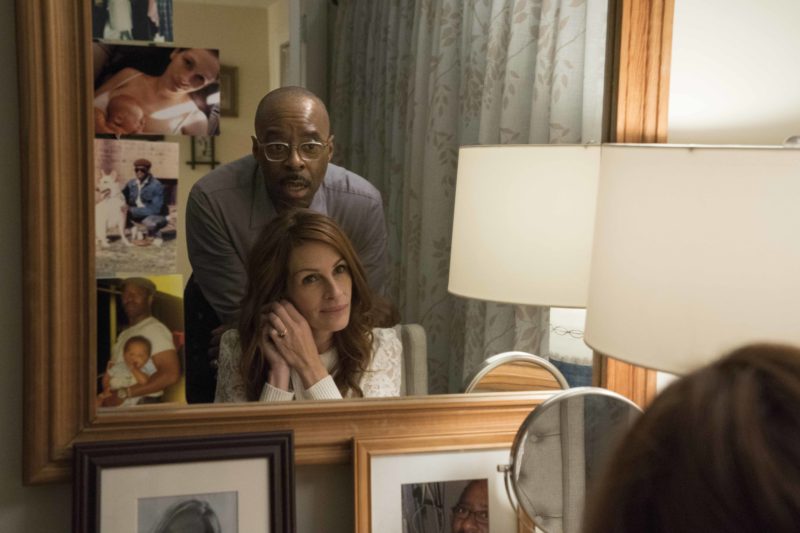 Courtney B. Vance and Julia Roberts in Ben is Back

Ben (Lucas Hedges) comes from a well-to-do Upstate New York family. His mother Holly (Julia Roberts) and second husband Neal (Courtney B. Vance) live with Ben’s teenage sister Ivy (Kathryn Newton) and much younger half-siblings in a big, beautiful, picturesque house in the suburbs. But Ben no longer lives with the family — he lives in a rehab facility outside of town, where we learn he isn’t on his first attempt to overcome his addiction. When Ben shows up unannounced on Christmas Eve to spend some time with the family, only Holly really believes he’s there with the purest of intentions. His sister and step-father have seen him relapse too many times, and a Ben who’s using is not a Ben who should be around on Christmas Eve. Though he assures his family that all that is in the past, coming home also brings Ben back into an old life that isn’t nearly as buried as he wants it to be.

Ben Is Back marks the first collaboration between writer-director Peter Hedges (Dan in Real Life, Pieces of April) and his son, actor Lucas Hedges. (Technically the second, as a 10-year-old Hedges has a very small part in Dan in Real Life.) The second Hedges and Vance sat down at a roundtable to promote the film at the Toronto International Film Festival this past September, someone asked whether or not Hedges felt it made a difference that the lead in his new film was his own son.

“I’d like to think it doesn’t, but I’m sure it did. Once we got going, it didn’t feel so different. But the first couple of days, I felt nervous. He seemed okay. He’s a remarkable young man.”

At this point, about 20 seconds into the interview, Hedges starts to get misty-eyed.

“I’m sorry! You start on my son, I just can’t help it! He just really believed in the story and he was so excited to get to work with Julia and Courtney. One time, he came home from college and showed me a video of Courtney acting — years before we even though of making a movie together! It was a real privilege to get to tell this story with these people.”

“And, you know, somehow I didn’t realize that you two were father and son,” adds Vance.

“I remember when you realized it!” laughs Hedges.

“We were on the set and I said to myself, ‘Wait, is that his son?!’ And I remained in awe of how the two of them made the navigation and remained available and made it possible for us to remain in the little cocoon of our film, because it could very much have been a tense situation between father and son. I just want to thank you for setting up that environment so that it wasn’t that — so that we could all be family.”

“The job is to tell this story,” continues Hedges. “I have found that when I’m aligned with the right material and working with the right people, I have uncommon strength. I have a capacity to do more than my limited sense of myself could do. I feel like, on our best days when all of us just kept our eye on making sure we were telling the best or fullest or most real and complex version of this story, that that was the goal. When you have a cast that’s this accomplished — and even in the smallest parts, we had some of the best actors — everybody brought it. The kids in the movie brought it. You can understand how kids can derail a movie, but these kids are so vivacious. It was just one of those projects where everyone came to it for a very particular reason — often a very personal reason, as it turns out. As the movie went on, people would pull me aside and tell me about their issues or an issue with a family member.

“I was struck with how many people came to the movie because of its essential theme: a mother who’s not going to give up on her child, no matter what, and a young man who has made mistakes. We all make mistakes. We live in a time right now where it seems everyone is dispensable. People can be cancelled in a moment and there’s something very moving about a young man who says, ‘I am doing better, and I am going to do better.’ Even though he may not be able to at this moment in time, he’s certainly trying. I was talking to Lucas once and I said, ‘There are two kinds of moms: moms who don’t love you enough and moms who love you too much.’ I said, ‘You happen to have one that loves you too much, and you’ll have those attendant issues that you’ll want to talk about in therapy (laughs) but I can tell you the better one to have is the one that loves you too much.’” 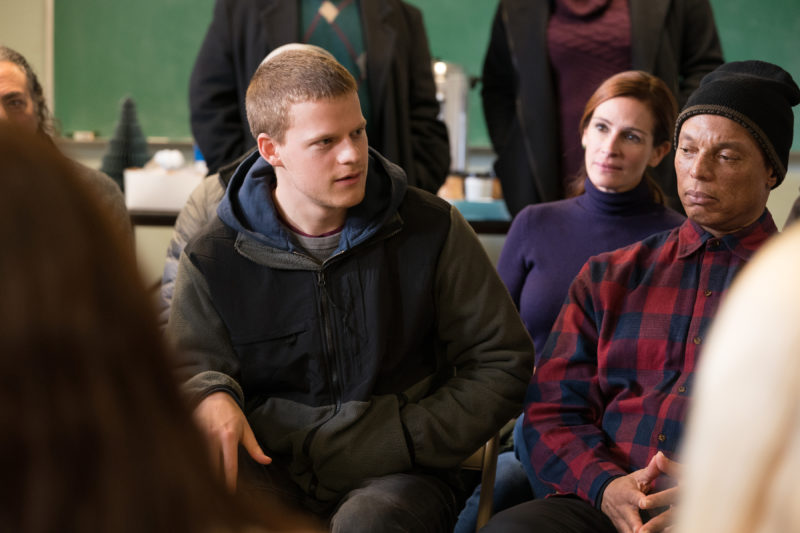 Lucas Hedges and Julia Roberts in Ben is Back

Roberts plays the mother who loves too much in the film; perhaps unsurprisingly, much of the attention surrounding the film is focused on her performance.

“The truth of it is: she’s a great, great actor — I’m not such a great director,” says Hedges. “So I have to bring my A-game. Just because you want to! Just because you need to keep up. She’s the most prepared actor I’ve ever worked with. I’ve never seen anyone be so ready to go. And you wanna make sure your camera’s ready and your crew’s on top of it, because she brings it right away.”

“To dovetail on top of his self-deprecating stuff about not being a great director…” says Vance. “I’ve worked with a lot of ‘great directors’; I remember one who came to me and said ‘Courtney, if you could just walk over here and turn around at the end of the scene…’ and that was it! He walked away. He was an A-list director! So what Peter created for all of us, that’s what we required. You don’t need to know everything as a director, but what you do need to do is create an environment for everybody to be able to bring their A-game. And that’s what you created.”

For Hedges, Ben Is Back is very much a film of its time.

“The genesis of the story is that Philip Seymour Hoffman overdosed,” says Hedges. “Another friend overdosed. Prince is dead. Heath Ledger is dead. A famous rapper (Mac Miller) died yesterday. People are dying right and left. Our prisons are filled with criminals who committed crimes when they were either high or drunk. Our prisons are basically filled with people who have substance issues. The genesis of this movie was that in this very divisive time in America, I decided I wanted to commit the rest of my remaining days to making urgent, necessary work. I write about families, I care about families. Families are the first front on which everything is dealt with and handled. The Orpheus myth is my favourite myth and the prodigal son is my favourite parable and both of those informed me. I just had a desire to make something that would be a part of a bigger conversation, which is how do we help each other? How do we love each other? How do we not give up on each other?”

“The reason that the film is so topical is because it’s not just an inner-city issue anymore,” Vance continues. “We live in a very highly functioning public school district that’s the highest ranking public school district in California and we’re dealing with it. That’s why the film is so topical and relevant, because it’s time to get these issues out from under the rug. We will not be able to weather this storm. The fabric stretches, but it doesn’t tear or break. We need to be able to talk about this. We have issues. It’s okay, we’ll get through it, but we have to be able to talk about it. If we don’t, it will probably be the thing that undermines us.” ■

Ben Is Back opens in theatres on Friday, Dec. 21. Watch the trailer here: