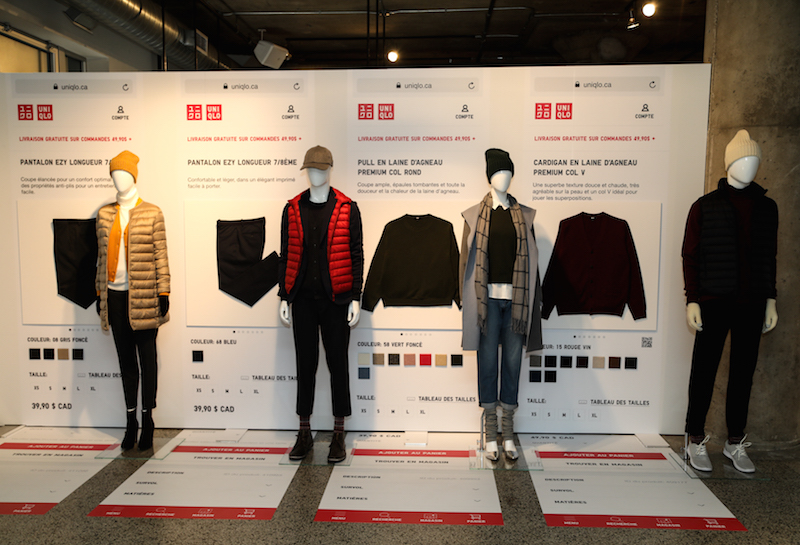 To the chagrin of many, there is no Uniqlo in Montreal.

At present, the Japanese casual wear giant’s only Canadian locations are in and around Vancouver, which they’re using as a gateway market, and Toronto. It’s weird when the gods of commerce decide that Vaughan, Ontario is a more suitable location for, well, anything than Montreal, but here we are.

Montreal has long been suggested as a target for Canadian expansion, mind you. In October of 2017, CEO Yanai Tadashi told Daily Hive‘s Kenneth Chan that a Montreal expansion was being planned, but since it’s a year later and no noteworthy progress has been made (to our knowledge), maybe those plans have been amended.

Still, Uniqlo fans in Montreal might want to take heart: a two-day Uniqlo LifeWear pop-up currently on offer suggests good things may be on the horizon.

Running today and tomorrow (Nov. 8–9) from 10 a.m. to 9 p.m. in the neo-industrial QUARTIER-CENTRAL space at 1461 St-Alexandre, the LifeWear pop-up isn’t actually selling anything. Not directly. Rather, the whole endeavour seems like it’s a brand awareness-raising kind of deal. Visitors will be encouraged to get up close and personal with the brand’s HEATTECH line before winter’s icy fingers start probing for sartorial weak spots and also to download the UNIQLO CA app, which will (finally) allow Canadians with the good sense to not live in and around Vancouver or Toronto to buy their wares online. That said, pop-up visitors won’t necessarily go away empty-handed. We have it on good authority that they’re giving away various HEATTECH items.

While we’re sure that local clothiers aren’t thrilled by the prospect of a competitor of Uniqlo’s stature entering the local market, at least one person doesn’t seem that worried.

“We don’t really think of Uniqlo as a competitor as their products are of a very different level of quality and price point,” says Edmund Lam, Creative Director of Frank And Oak. “As a marketer, I think they are a great brand and are very effective with their strategy and messaging, so I’m interested in observing how they will do things [here]. As a consumer, I’m excited because I think they make great affordable clothing.” ■