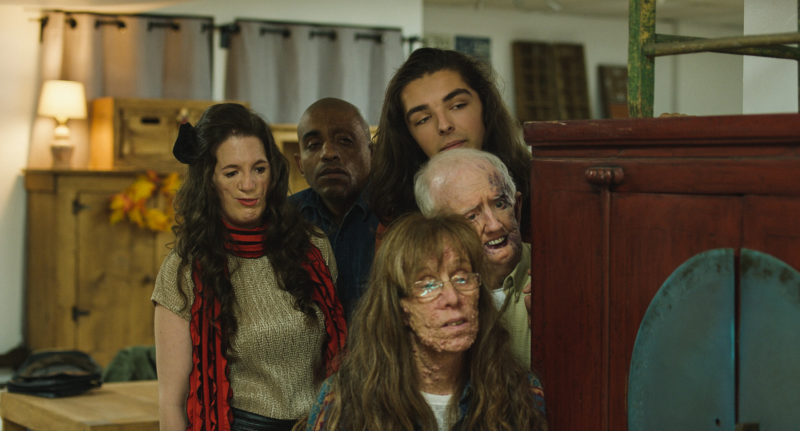 Every week, a group led by Vanessa (Debbie Lynch-White) meets in a Montreal hospital. Everyone in this group has some kind of facial disfigurement; the group is intended as therapy to help its members face their daily lives better. Some people, like aspiring model Maggie (Alison Midstokke) were born that way (Midstokke has Treacher-Collins Syndrome). Others, like former cop Jocko (E.R. Ruiz) were in accidents or bear the scars of major surgery. Stanislas (Robin L’Houmeau) infiltrates the group by bandaging his face, but he isn’t disfigured — he’s trying to face the shame and fear that comes with his mother’s (Noémie Kocher) debilitating cancer diagnosis. He’s so afraid of her illness he’s essentially cut all ties with her, and he thinks that joining this group will let him get over whatever it is that’s preventing him from living through the trauma of his mother’s decline.

Director Alexandre Franchi is fairly open about how autobiographical his film Happy Face is. Like Stanislas, he lost his mother to cancer in the early ’90s; like Stanislas, he felt a deep shame about the disfigurement that she went through during the ordeal.

“The film is autobiographical in the sense that Stan is some kind of alter-ego, and all the scenes with his mom are taken directly straight-up from what I lived,” says Franchi. “It’s set in the ’90s because I was that age when that happened to me, but there are also two other reasons. It was the time when the Internet was starting — a pre-Facebook era. The Internet was text-based, not image-based.”

“The other reason was that the ’90s allowed me and my characters to be politically incorrect. I didn’t want to make a film set in this current era and have the characters say ‘facially different’ as opposed to ‘disfigured,’ and deal with the kind of inclusion discourse that’s out there. It’s great — it has great goals, but at the same time, we see the clashes that are happening with people who are more closed-minded. In my mind, you’re never going to shame people into becoming more open. They’re only going to become more closed, and vote for people like Trump! (…) It was a way to avoid watering down the language and sanitizing it to the point where it would impede the message and the naturalism of the story. The reality of people who are different — or certainly of my actors — is certainly intense and hard-assed. No amount of nice language is going to shelter that. It felt natural — more provocative, I suppose.”

Obviously, casting a film like Happy Face poses something of a challenge. It’s unthinkable to use make-up to achieve the right effect, but it’s also difficult to find disfigured people who are a) somewhat local; b) down to be in a movie; c) good enough actors to carry one. The film’s cast is a bit of a mish-mish: there are local actors, people (like Midstokke or inspirational speaker David Roche) that aren’t from Canada but have some background in performance, and absolute non-actors. Franchi explains that the process was a relatively arduous one.

“Basically, we did some casting sauvage,” he explains. “Casting calls out in the public, we went on Global with my casting agent. We went through casting agencies in L.A., in Toronto… Sometimes, in L.A., they can get just about anything for you: a cat , or giants, or whatever! But there are also associations that work with burn victims or people with facial differences. I went through one in Toronto called About Face, and that’s how I met David Roche, who plays Otis. He speaks in schools and things like that. He got me a lot of people. Him being on the project made it legit. I offered an acting course. I went to them and I said, ‘Look, your mission is to get people with facial differences to come out into the open. Acting courses are great because they’re a great icebreaker, they’re fun to work on presentation skills.’ I paid for a great acting coach in Toronto, we did a one-day workshop in which I participated, and all I asked for was that at the end of the day, I could talk about my project. No strings attached.

“Acting workshops are a lot like group therapy! You need to fucking break the ice and talk about your stuff. I ended up talking about my mom, the shame, the fact that I felt superficial, all that shit that goes on. We wrote our stories on pieces of paper and exchanged them. At the end of the day, I felt there were less taboos. It was easier to ask them stuff. I could ask them about using the word ‘disfigured’ versus ‘facially different.’ I could see if we could joke about it. I wanted to make something a little punk, a little bad-ass… not something like Wonder, where we’d put make-up on a ‘normal’ kid. I wanted to tell their stories and put it into something that was half-doc, half-feature, but something that had their genius in it.” 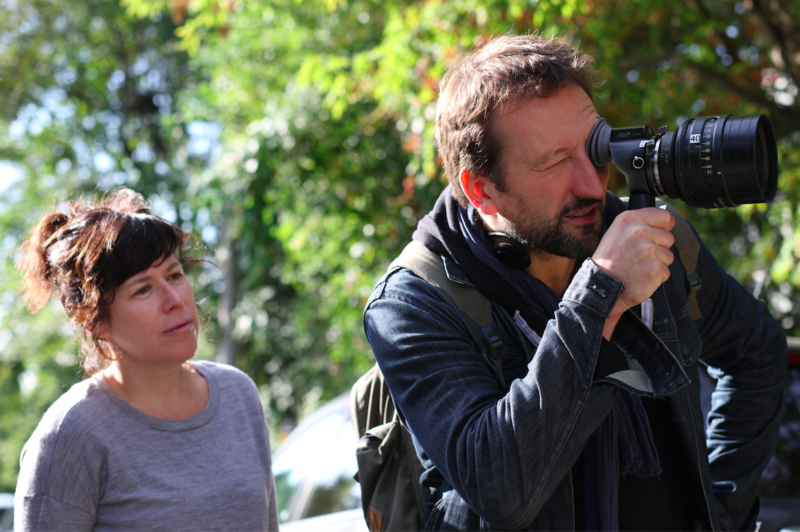 This led to continuous rewrites as Franchi adapted his script to the reality of the cast that was coming together.

“Every night, man!” he says. “I’d smoke up, because I was super stressed. My first movie, The Wild Hunt, cost me a hell of a lot of money. I nearly went bankrupt, it taxed my relationship, my sanity… so when I embarked on this one, I had anxiety. I had friggin’ PTSD! It was a personal story that I didn’t want to fuck up. (…) Sometimes, at the end of the day, we’d do the scene that I wrote and it wouldn’t pop. It wouldn’t lift. We’d have to workshop it, but we didn’t have much time or budget to do that. Then something would happen: something would break, someone would cry and then it would work. My DP Claudia would grab it, and then that night I’d have to adapt it and work with what happened.

“Oddly enough, I’m not very confident with lots of aspects of directing like mise-en-scène or complex camera movements,” he continues. “But I’m confident working with non-actors, or getting the magic or the lightning out of people. I like getting the story of their past, I like getting inside their heads. If I was doing something with you, I’d need to push you, I’d need to get you to open up, but I’d get something weird out of it. It does require trust.I’m lucky enough that they trusted me.”

It is, of course, a controversial subject — and one that many are wont to have an opinion on without having seen the film. Franchi says there was pushback from the beginning, and that there continues to be pushback.

“I was trying to get funding for it,” he says. “Distributors in Toronto were telling me, ‘Oh, I don’t think we really want to see faces like this on a screen for an hour-and-a-half.’ Some people internationally were telling me they had no idea how to sell it. Some of the former distributors who passed on the project and specialize in documentaries thought the idea of the kid who fakes having a deformity was exploitative. (…) I heard a bit of that, but even now… our distributor wanted to put our teaser trailer in universities. And it’s not bad – I think it’s kind of badass! And the marketing company that was to distribute it said, ‘Oh, we’re afraid the directors of universities are going to pull it because they’ll be afraid of shocking students.’ The climate with diversity and inclusion now is pretty touchy. Everybody who makes money off of that is afraid to be, you know, killed on the public place. For the first few days, I was pretty upset about it — it felt like censorship. Now, I just want to do something positive. I’d want them to put it up for free, so that if ever there’s a backlash, they can say it’s pro-bono.

“I was certainly afraid of this, and I told my actors,” he continues. “Film is exploitative. I was afraid that I was exploiting them, but then again, anyone I cast in the lead, whether it’s Debbie or Angelina Jolie… I’m exploiting her! It’s all about the star power and the reaction they bring. But in the end, the actors were just like, ‘Hey, man: exploit away!’ (laughs) The reaction was very positive. Some of them told me, you know, they’d never dreamt they’d be in a movie. Most of the people who had a negative reaction to the project were mainly white, mainly male and mainly had nothing different about them! (…) I had cancer in my leg eight years ago. Bone cancer, and it nearly took out my leg — and my life! I had a big scar, and it took me years to go out wearing shorts. Yet they go out there with their faces. Technically, I would need a cane — but I’m afraid to appear weak and decrepit and ageing, so I don’t bring the cane. I’m feeling all this for a friggin’ leg! When I told them all this, they were just like, ‘Hey, but I get to be in a movie!’.” ■