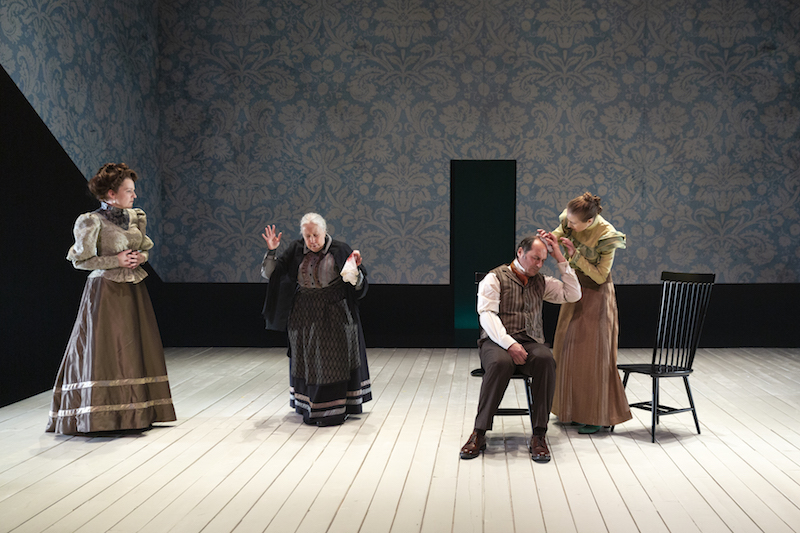 Lucas Hnath’s A Doll’s House, Part 2 is called a “sequel” to Henrik Ibsen’s A Doll’s House, but that may not be the best way to describe it. This isn’t the most important discussion to have about Hnath’s play, the multiple-Tony-Award-nominated talk of 2017, (and, according to American Theater, the most-produced play in America this season) but it bears exploration anyway.

In sequels, we expect certain things, continuity and consistency perhaps most of all. We know the characters — or at least we think we do. We know what they’d do and what they wouldn’t, what feels real and what doesn’t, or wouldn’t.

This is why the smashing production of A Doll’s House, Part 2 — currently on offer at the Segal Centre — is as much a curiosity as anything else. Over the course of its taut and wonderful 90 minutes or so, we aren’t asked to question whether we know these characters or not but whether we understand them or not, and moreover, what our judgment of them says about us.

If you’re a geek about this stuff, it’s exhilarating. If you’re not, it’s still a damned good time.

A Doll’s House, Part 2 begins with Nora Helmer (an excellent, passionate Sarah Constible) knocking on the same door she so famously slammed at the end of Ibsen’s masterpiece. It’s fifteen years later, and she’s back at the scene of her life-defining choice — a bit older and a whole hell of a lot brassier. She wants her old nursemaid Anne Marie (a superb Victoria Barkoff) to guess what she’s done with her life that she can wear such nice clothes. It’s a fun little bit expertly acted by Constible and Barkoff and the device through which we learn that Helmer is now an author of books that question and condemn the institution of marriage.

This scans, obviously. So does Torvald’s (a consistently satisfying Oliver Becker) shock when he realizes who Anne Marie’s “friend” is. He is flabbergasted and bemused. He has much to say but isn’t quite ready to say it, and every time he draws breath he looks like he’s about to scream or pass out. The back-and-forth between Constible and Becker in this scene is nothing less than expert, and expertly timed.

(In the Script Grammar notes of Hnath’s play he writes that “Some lines end without punctuation. This is intentional and meant to indicate that there wants to be an almost seamless flow from one character’s line to the next character’s line.” Constible and Becker do Hnath proud, here.)

It’s also in this back-and-forth that we learn why Nora is back, and what she needs, and what Torvald did after that thunderous door slam, and how that affects everyone concerned, and who thinks what and why they do. Later, it is Anne Marie’s turn to confront Nora, and later still, Nora is forced to (hesitantly) interact with her now-grown daughter Emmy (played with weird, charming intensity by Ellie Moon).

Emmy is happy to speak with the mother who abandoned her but she’s no fawning fan or jejune dummy. She’s straight-backed and sharply self-assured and she’s got plans that Nora is complicating because Nora, both by her presence and her absence, is forever complicating things. Hnath’s exploration of the aftermath of Ibsen’s play is intriguing. We know that Nora felt imprisoned by her marriage but in breaking free of it, she removed herself from a narrative that kept on chugging along without her. Her re-insertion gums up the works, and it’s Emmy who articulates how. And what’s to be done. And why.

Everything happens in the same place: a simple, spartan room that’s empty but for two chairs and that all-important door. Pierre-Étienne Locas’s set is simple but not simplistic. Its strange, discomfiting angles and faded wallpaper make it old and new at the same time. When the actors are onstage it feels like they are inside something massive, menacing and provincial. In this space, Louise Bourret’s costumes enhance their characters. The newness and refinement of Nora and Emmy’s ensembles are counterbalanced by the bland, humble simplicity of what Anne Marie and Torvald wear, and you’re never thinking a hair or a stitch is out of place.

Caitlin Murphy’s direction is equally on point. If you didn’t know this was her professional debut, you wouldn’t suspect it. Her actors make excellent use of the space by not exploring the space too much. The show’s staging and blocking allows the script to breathe and for the individual actors to stretch and inhabit big swaths of geography  — something on display towards the play’s conclusion when Becker gets to be exceedingly (and hilariously) physical and Constible has to vacillate between various states of emotional and physical confusion.

It’s delightful. All of it.

Though some will invariably be turned off by this production — Hnath’s script, with its modern vernacular, sardonic witticisms and, gasp, swears, will invariably displease certain theatregoers — you can’t walk away from this show without thinking that it represents a particular kind of newness we need to see more of in Montreal. This isn’t to suggest that every production needs to be inventive and audacious, only that new voices, however insouciant, are essential to the prolonged health and relevance of the scene here. ■

A Doll’s House, Part 2 runs through Dec. 9 at the Segal Centre (5170 Côte-Ste-Catherine) For ticketing information and more, visit segalcentre.org.