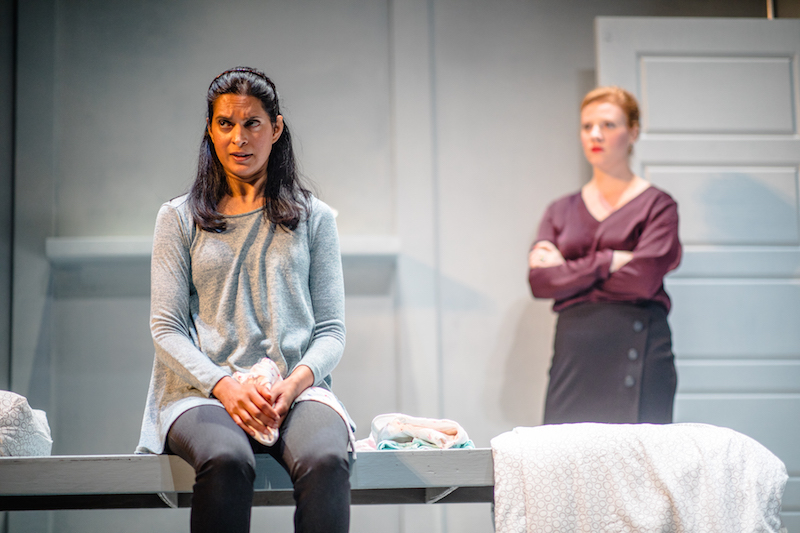 Imago Theatre’s production of Hannah Moscovitch’s Other People’s Children features tremendous artistry and could have been a hell of a thing. Instead, it is a frustrating time at the theatre.

Other People’s Children clearly has things to say about motherhood, class, identity, capitalism and family. It is frustrating because it doesn’t speak to or about those things, or really try to. As an audience member you are conscious of what the play is interested in, and so you patiently wait for it to become actively interested in the things it is ostensibly about. But it doesn’t. And then it ends. And when it does, the great and well-meaning work done by the designers, technicians, actors and director Micheline Chevrier becomes a moot point.

Ilana (Kathleen Stavert) and Ben (Brett Donahue) are a well-to-do Toronto couple. She’s a lawyer and he’s a salesman (or some such thing). Their personalities are broadly drawn and calibrated to match a colloquial understanding of the two professions: she’s sharp, intense and callous; he’s charming, charismatic and empty. Together they are something less than perfect.

Months after she gives birth to their first child, Ilana wants to go back to work. She wants a nanny. Ben isn’t so sure he does but he doesn’t put up much of a fight. Enter Sati (Asha Vijayasingham), an engineer from Sri Lanka. She is set up in a small guest room which she adorns with photos of her own children. Mere moments after she moves in, Ilana is in there trying (and failing) to be relatable. When Ilana isn’t in there, Ben is. He’s not trying to seduce Sati sexually, but he wants her to like him and wants Ilana to notice that she likes him. Ben wants everyone to like him. He is an insufferable adult boy and Donahue plays him brilliantly — floating and detached one moment, viscerally temperamental the next.

Sati is always “charmed” — by the baby, by the city skyline — but never charming herself. She’s not really anything herself because she is a foil for Ilana and Ben. We understand who they are through their dealings with her. As such, Vijayasingham is more than capable but generally wasted. Her character is two-dimensional at best; she is at the mercy of the writing.

Ilana treats Sati with kindness, curiosity and stern contempt; she wants the domestic assistance but doesn’t want to to lose her role as a mother. Stavert is at her best in those moments. When she is quietly seething or otherwise processing the reality of her situation, she is all too real and Stavert deserves praise for being able to relate this. Ben uses Sati to relegate his wife. He is acutely aware that she is the help, that she’s not going to talk or push back. Ben likes this; he understands that she only exists as she pertains to his needs, Ilana’s needs or the baby’s needs.

You may have never seen this play before, but you’ve definitely seen this dynamic before. Sati complicates the relationship and at times, Ilana and Ben try to outdo each other in front of her. Ilana makes fun of Ben’s attempts at speaking Tamil, for instance. Ben goes above and beyond to prove he is Interested In Her As a Person and not just as a care worker, for instance.

Moscovitch writes Sati far too deliberately: she is a living, breathing piece of social commentary. Moscovitch wants us to understand that well-educated people come to Canada and become care workers. Sati is a symbol of the West’s consumption and cultural domination; we make engineers raise our kids and doctors drive our cabs.

Thing is, Moscovitch pulls her punch. There is a minor backstory wherein Sati lived in Japan for a week and may have been a sex worker. The way this is presented is weird; we’re supposed to understand that Sati is victimized by a system but also that other systems may be worse. I’m not sure what the point of this is.

It merits mention that the Imago team has created something that looks and feels astonishingly good and real. All the action plays out in one of two rooms: the couple’s master bathroom or Sati’s bedroom. The cleverly (and beautifully) designed set delineates these spaces quite well. It also echoes who we understand Ilana and Ben to be. Imago’s attention to aesthetics is commendable, here. Ilana and Ben want to showcase the trappings of their success, so their home space looks like something out of Dwell, except the majority of their time is spent in the bathroom. This includes some jaw-dropping scenes of conflict and choreographed violence.

Whenever you read about Hannah Moscovitch, press plaudits are invariably mentioned. She is the “irritatingly talented” (Eye) “wunderkind of Canadian theatre” (CBC) and an “indie sensation” (Toronto Life) to boot. She is “Canada’s Hottest Young Playwright” (Globe and Mail, National Post, NOW) but also the “dark angel of Toronto theatre” (Toronto Star).

It seems plain, though, that Other People’s Children isn’t Moscovitch’s strongest work. It is neither cohesive nor coherent. Rather, it is a collection of ideas and intentions that don’t go where they could or should. As a result, what might have been a timely discussion of big, important things settles for being a domestic melodrama. And when it does, every ounce of Imago’s energy is forced to settle along with it. ■

Other People’s Children runs through Nov. 4 at the Centaur Theatre. For tickets or other information, visit imagotheatre.ca.