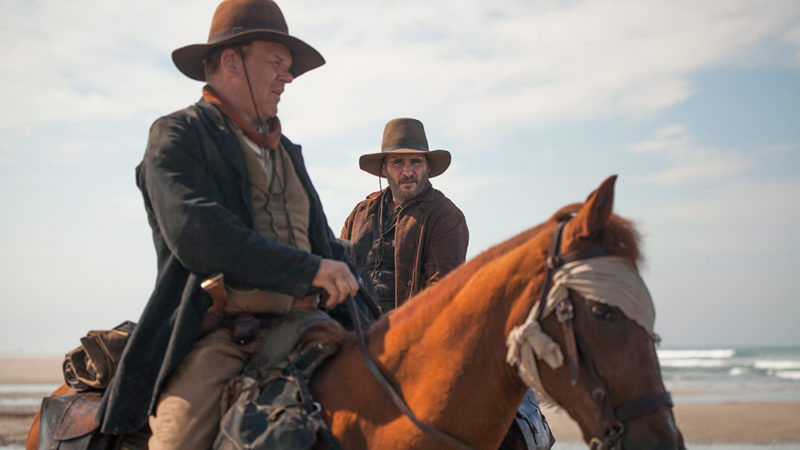 Practically any modern Western is approached as “revisionist”, an increasingly meaningless term now that “traditional” westerns are all but nonexistent. Jacques Audiard’s The Sisters Brothers is an unusual hybrid of the two, a Western with a wry sense of humour and a gentle fatalism that nevertheless sticks to a pretty traditional vision of the Old West. Joaquin Phoenix and John C. Reilly star as the titular brothers, a pair of ruthless mercenaries who work as hitmen for the Commodore (Rutger Hauer). Their latest job is to track a prospector (Riz Ahmed) who has devised a special chemical formula meant to identify golden nuggets more easily. With several days before they even catch up to their target, the brothers hire a detective (Jake Gylenhaal) to befriend and slow him down.

Less an elegiac ode to the death of the west and more of a shit-happens picaresque journey, The Sisters Brothers is focused on two archetypal male relationships: the contentious but unbreakable bond between the two brothers, who soldier on doing something they seem to hate but also understand is the only thing they’re good at, and the tentative friendship that starts between the detective and the prospector. Bursts of extreme violence and a sly sense of humour sometimes recall the Western-est works of the Coen brothers, but The Sisters Brothers is a weirder, somewhat less cynical take on the typical Western monomyth. (Alex Rose) 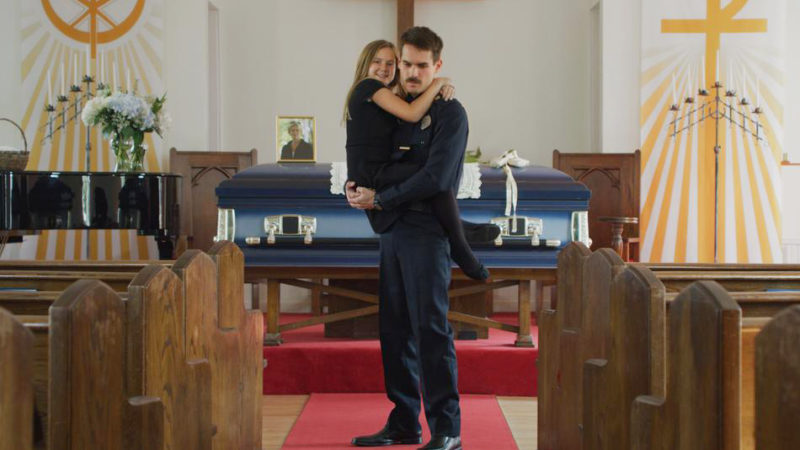 Jim Cumming’s Thunder Road opens with an extended eulogy as an increasingly erratic cop laughs, cries and eventually dances, as he pays his respect to his recently deceased mother. The scene is hilarious and tragic, a tone that the film improbably maintains through its entire running length. In grieving his mother’s death, Jimmy, must also fight for custody of his daughter after his ex-wife files for divorce and wants to break their co-parenting agreement.

Cummings, who writes, directs and stars in Thunder Road, achieves the impossible in portraying Jimmy. It is a character that is so out of touch with outside perceptions and control. Jimmy struggles in nearly all aspects of his life. He is full of love but consistently fails to be reliable and acceptable. He is a character who strives to be a good father, a good police officer and a good husband and can’t quite make it. Because he can’t fake it either, he sticks out like a sore thumb, and people increasingly distance themselves from him.

While Jimmy is clearly going through some shit, he still treads that line of completely justifiable ostracization. He is difficult and, on more than one occasion, dangerous. But, aside from his friend and partner, people seem happy to see him drown under his own ineptitude. There is an underlying cynicism in the way people talk and behave around him, a toxicity that poisons the culture at large. As funny as it is poignant, Thunder Road is a rare film about a struggling person that does not feel exploitative. (Justine Smith) 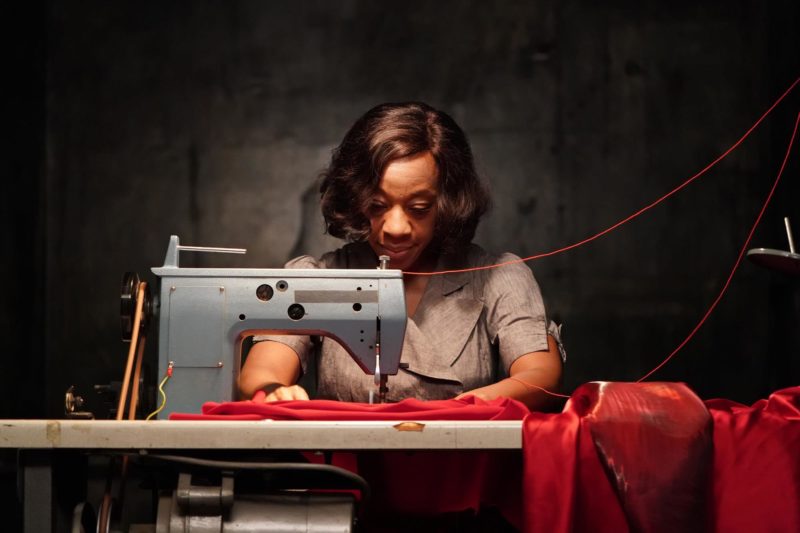 Peter Strickland’s The Duke of Burgundy remains one of my favourite films of the last decade, a truly surprising and hilarious film that defines categorization. All of Strickland’s films operate on some level of genre or aesthetic pastiche, but none of them are quite as openly comedic as In Fabric, a genre parody so arch and specific that its target audience may well be in the low hundreds. In Fabric is set around a mysterious department store run by quasi-witches who speak in flowery platitudes. When divorced Sheila (Marianne Jean-Baptiste) buys a showy red dress for a blind date, she sets off a series of ghostly events that perpetuate as the dress is passed on from hand to hand.

There’s outright comedy here, from a pair of extremely anal bank managers who dog Sheila at every corner (played by Steve Oram and The Mighty Boosh’s Julian Barratt) to the fridge-poetry word salad put forth by the spectral salespeople, but In Fabric doesn’t really qualify as straight-up giallo parody. It’s something else entirely, a reverent style pastiche (complete with bloopy synth score from Stereolab’s Tim Gane through his project Cavern of Anti-Matter) that revels in the sensorial particulars that seem to obsess Strickland. It’s funny and strange and hypnotic, but also sort of ridiculously specific in a way that The Duke of Burgundy wasn’t. In Fabric reminded me more of the work of its executive producer Ben Wheatley in the way that it fully commits to its ideas both good and bad. (AR) 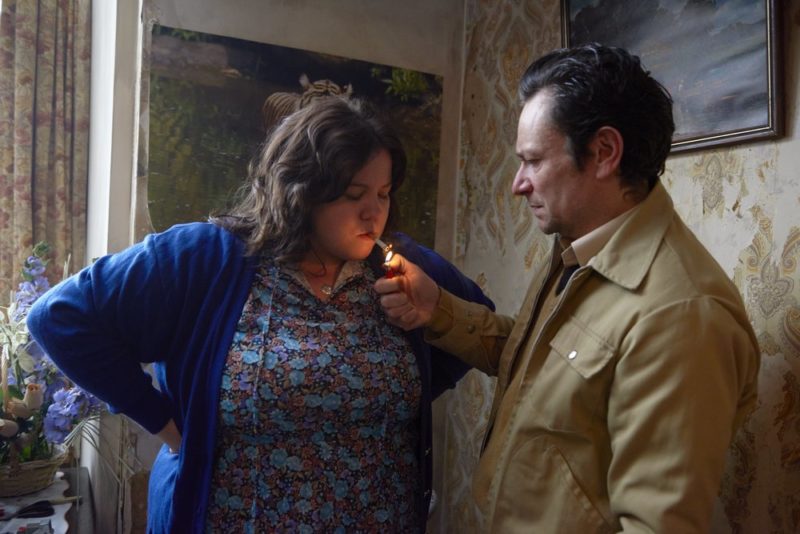 Billingham, perhaps best known for his colourful, brutal, and at times brutally funny, photographs of his parents living in a low-rent British outskirt, here re-stages his chaotic family life with a softer gaze but a no less keen eye for the vicissitudes of his own bedraggled and compelling family.

For those familiar with his work, the initial images of Ray & Liz bear such a striking resemblance to the interiors in Billingham’s photos that it may take a moment to realize that the film is scripted. The screenplay comes across almost like a stage play: crisply nuanced but unusually snappy for the screen. It’s as if you’ve been invited to a private performance at the most unnerving of community theatres, where for this night only the toddler is allowed to stay up past bedtime to play himself, covered in shoe polish and wielding a knife. The acting is deeply peculiar, ranging from the precociously amateurish to the disturbingly naturalistic.

One of Billingham’s best-known photos is of Ray, drunk and flinging a cat through mid-air. Many of his photos of Ray and Liz harbour animals in both supporting and starring roles, and in the film as well it’s part of what allows us to view Ray and Liz with empathy: Liz may beat a man’s face with the heel of a shoe, but presumably she feeds the sweet-faced mutt. The sympathetic thread wending its way through Ray & Liz may well be it’s cast of creatures: all of them, from the frantic yellow-green budgie to the three snails on a pale orange flannelette blanket, at once judgmental and compassionate, not so unlike Billingham. (Nora Rosenthal) 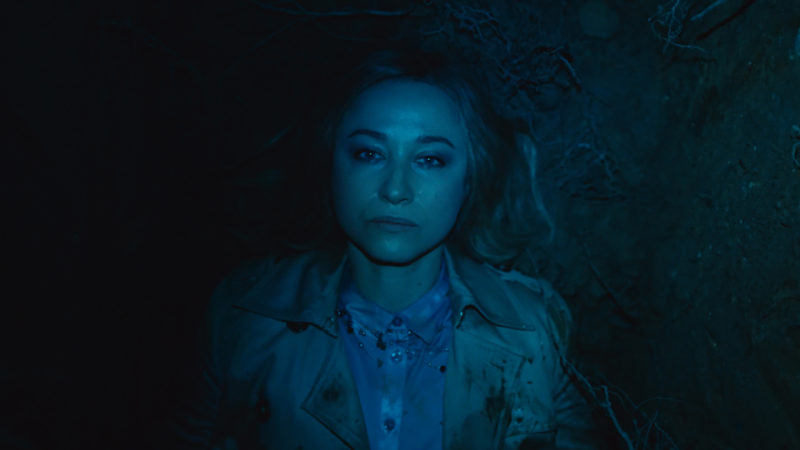 In 2015, Agnieszka Smoczynska emerged with her lush feature debut The Lure, a mermaid vampire musical. With Fugue, her sophomore feature, she returns to genre filmmaking but embraces mystery over fantasy. As a woman, now called Alicja, reappears after two years with no memory of where she was or her former life, her loved ones try to bring back her memory. Seen through the eyes of a woman who might as well be an alien with sheered hair and pallid skin Fugue is grey and stilted.While there’s still music, dancing and aquarian blues, they appear in flashes rather than as a full-blown burlesque extravaganza. The film still has an audacious style, sound, image and composition. While the images are more restrained, Smoczynska’s talent for strong images that teeter between unease and absurdity remains.

With a rocky beginning and end, the film’s central portion is extremely strong. Gabriela Muskała gives a nuanced and aggressive performance as Alicja, pushing the film deeply into an atmosphere of unease. The writing never portrays her as fragile, she is misanthropic and distrustful and always seeking escape. If she is resigned, it is only to serve her greater purpose to get back out on her own even though she genuinely doesn’t know what that means. While flawed and a bit of a slow burn, when the film sinks its teeth in, it is a gripping and remarkably haunting portrait of love, regret and identity. (JS) 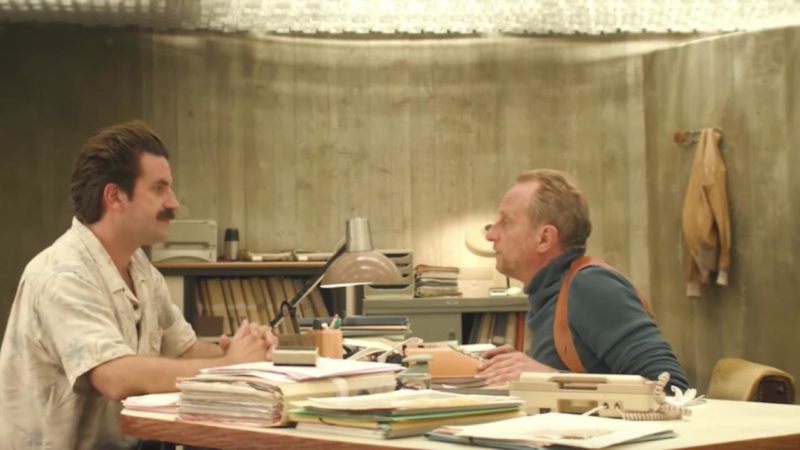 Quentin Dupieux has built quite a solid filmography of absurdist, unquantifiable filmic objects; his latest, a slight-by-design cop comedy that revolves entirely around one (overlong) interrogation, ranks amongst the very best comedies I’ve seen this year. Fugain (Grégoire Ludig) is taken into the police station after he comes upon a dead body in front of his apartment; naturally, he’s considered the most likely suspect. Inspector Buron (Benoît Pooelvoorde) is tasked with taking his deposition, but Buron isn’t particularly interested in the nitty-gritty of police work. He stretches out the interrogation over several hours (at one point ducking out to eat a hotdog with his son in a parking structure), turning it into a form of low-key torture for the hapless Fugain.

Part Beckettian deconstruction of narrative, part parody of familiar cop-show clichés and entirely hilarious, Au poste! works on so many levels that it feels unfair to go into it too much. At only 73 minutes, it’s such a carefully crafted bit of silliness that it’s easy to overanalyze or fall into generic joke description. Suffice to say that it’s inventive and hilarious, bolstered by finely-tuned performances by Pooelvoorde and Ludig as two sides of the same dumbass coin. Some of Dupieux’s features have leaned a little too hard on the weird-for-the-sake-of-weird angle of absurdism, but Au poste! is careful nonsense with a point. (AR) 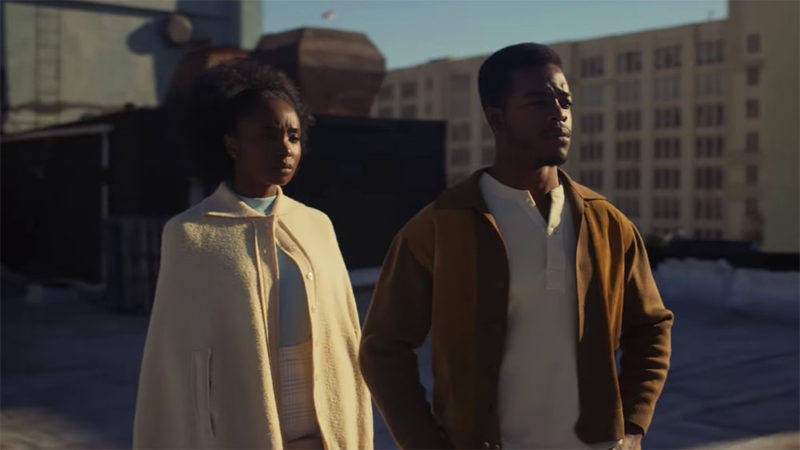 If Beale Street Could Talk

With the same languid sensuality as Moonlight, Barry Jenkins adapts James Baldwin’s 1974 novel If Beale Street Could Talk. That isn’t to say they are identical, but they are undeniably the product of the same heart as Moonlight’s melancholia gives way to Sirkian romance. The film is about Tish (KiKi Layne) and Fonny (Stephan James), a young couple deeply in love and expecting a child. Fonny has recently been accused of rape and is awaiting trial and Tish works hard to maintain a lawyer, as she reflects on their life leading up to Fonny’s imprisonment.

Jenkins channels the intimacy of touch through audiovisuals. It’s not just bodies touching bodies, but clothing on skin and light reflecting off faces. There is a haptic quality to the film’s images that feel rich and at times, overwhelming. The grooves in a vinyl record become as essential as the music itself, all part of a landscape of the world touched by devotion. Love, more than just desire, becomes a way of seeing hope in a world of oppression and darkness. Loving yourself, your partner and your children is a way of fighting the binds of oppression.

But of course, it isn’t enough. Fonny’s trial keeps getting delayed and is bogged down by external interference. There is a disproportionate amount of injustice levelled against Fonny and his loved ones. Love keeps them surviving, but it can’t free them. Love, rather than shed a rose-coloured tint on the world, only serves to deepen our view of the systematic violence at play. (JS)

If Beale Street Could Talk screens Sunday, Oct 7 at 7:15 p.m. in Quartier Latin.