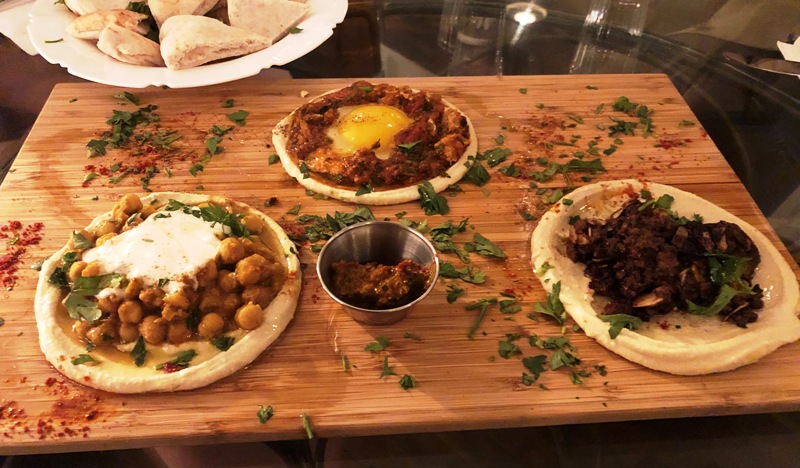 Birona describes itself as a Mediterranean couscous, tapas and hummus bar.

I guess I would, too.

The interior is warm, industrial chic with that uneasy mix of steel and glass paired with wood and natural fabrics that act as de facto decor for any place that calls itself a (insert food here) bar. The ceilings sport exposed incandescent bulbs hanging from repurposed fixtures and low tables sit surrounded by neutral-colored upholstery. It’s cozy. You know the drill.

Birona boasts a dozen beers on tap and a small wine list. I opted for a house cocktail with a regrettably embarrassing name, at our server’s suggestion, which turned out to be a take on a gin and tonic with shredded ginger and chunks of marinated cucumber. It was confident, simple and clean.

The menus, on the other hand, were confounding. We were provided with two menus apiece. The first menu was mostly devoted to the wide assortment of hummus on offer as well as a variety of sandwiches, while the second covered tapas, plates, sweets and beverages. Our server was friendly and patient in describing the format and was blameless in the resulting confusion. The menu was seemingly designed to accommodate as wide a range of people, preferences and moods as possible and as such I’m afraid that in trying to cater to everyone specifically, they may be catering to no one specifically.

It was never really clear to me what form the ideal, or even the average, meal at Birona would take. Some might appreciate the laissez-faire freedom the menu offers, but in a restaurant with such broad influences pulling equally from the Maghreb to the Levant, I would be interested in more of a streamlined experience. Amid this confusion, what is clear is how seriously Birona wishes to cater to its guests’ proclivities be they carnivorous, vegetarian or vegan. It’s rare to see a restaurant devote seemingly equal effort to these three solitudes, but Birona gives it the old college try.

We tackled the hummus menu first and decided on a hummus tasting plate ($25), a selection of three flavours from the more than 20 on offer. The dish arrived quickly alongside a plate of warmed pita cut into small triangles. The hummus plate itself was a good-sized wooden plank that fit perfectly in the middle of our round table and proved perfect for sharing. Our selections included Birona’s take on the classic hummus, followed by a Moroccan-styled approach which was slightly sweet with ground beef, chopped almonds and cinnamon. Lastly and most satisfying was the shakshouka topped with an egg poached in a thick sauce of tomatoes, onions and chili peppers. I am particularly happy to report that each preparation had, in addition to its own distinct flavours, a distinct texture as well that kept the hummus tasting from being a nightmarish study in like-textured spreads.

We then levelled our sights on the second menu that focused on tapas and plates. A chicken shawarma plate ($21) arrived, arrayed on a plank that facilitated sharing. The shawarma, as advertised with most of the plates, came bristling with three choix-du-chef tapas, yet more hummus and pita, coleslaw and came “served on a homemade purée,” which, in our case, turned out to be a nervous, mealy, under-cooked potato amalgam that I just wouldn’t feel right calling a purée.

The shawarma itself was nice, what little of it there was, lost in a conglomerate of tomatoes, parsley, onions and perched in its cradle of aforementioned “purée.” The tapas ranged in quality, from a crispy, stalwart falafel in a mild tahini sauce and a respectable, earthy muhammara pepper spread with walnuts and pomegranate seeds, to a small mound of what were supposed to be fried eggplant slices on paper but in reality were soggy disasters, still underdone in the centre and shamefully hidden under another jumble of tomatoes, parsley and onions.

Bizarrely, the most edible aspect of the shawarma plate ended up being a generous bowl of rough-chopped cabbage coleslaw tossed in a nutty, no-nonsense sesame dressing. While almost an afterthought and nothing to write home about on its own, its radically differing texture and simplicity of concept and execution managed to hold the rest of the slow train-wreck that was the shawarma plate together. 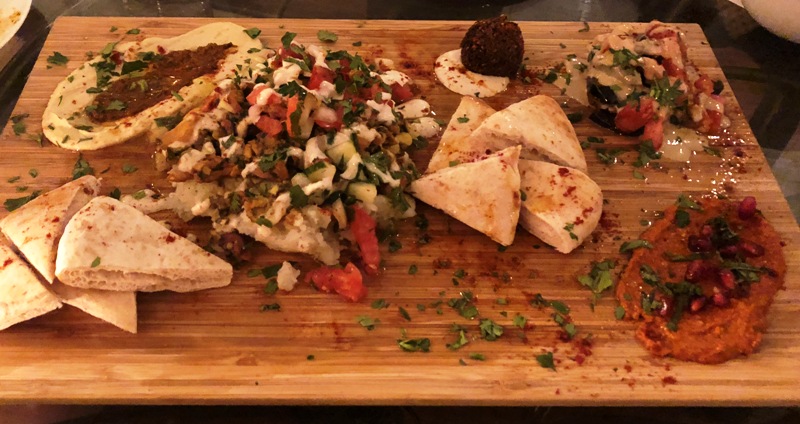 The couscous ($20) — whispering at a low simmer, visible on induction plates near the back of the restaurant in a variety of flavours — was more enjoyable. Full of vegetables and chicken, it proved to be hearty and well balanced. Unfortunately, hidden lumps of starch again proved the undoing of this dish as sizeable nuggets of underdone potato and titanic cloves of whole garlic blunted the otherwise delicate delivery of this dish, as did a generous drizzling of what was unmistakably sriracha, a wholly unnecessary and downright weird addition when considering the gentle, slow-cooked flavours it ended up erasing.

Lastly, a fattoush salad ($9.50) had me worried when it arrived at our table. The salad was constructed almost entirely of flat leaf parsley and rather than the flatbread to be expected in a more traditional take on the salad, this particular version confusingly made use of cubed French croutons instead. The salad, though unusual, was undeniably well-seasoned and perfectly acidulated, shuffled with radishes, mint, hunks of in-season tomatoes and rogue pomegranate seeds.

Birona had a lot going on and, unhappily, most of it missed the mark. I can’t help but feel the menu would greatly benefit from a round of trimming and condensing to render its vision and reduce a few instances of awkward repetition. Simple, well-executed details showcased the kitchen’s competence and proved to be a saving grace, but ultimately a scant few tasty outriders does not a wonderful meal make. ■