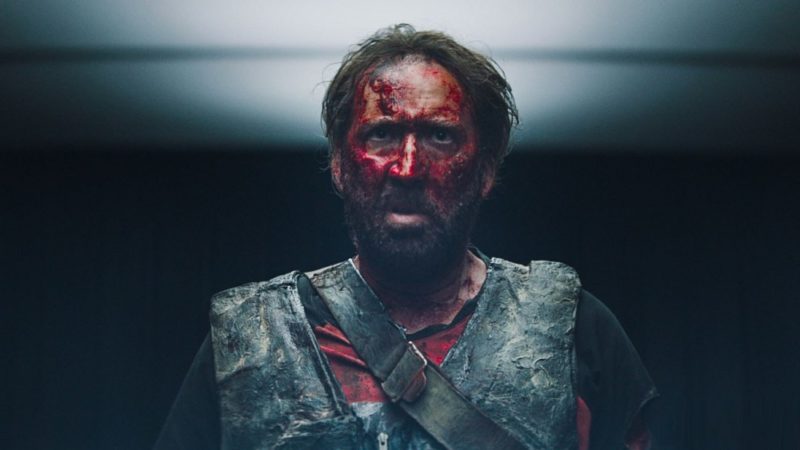 I’m going to warn you right away: I’m about to say some shit that everyone always says to hype up any mildly energetic genre movie. I’m aware that it’s hack and I’m aware that I’m probably not the first one to say it. But really, I do believe this wholeheartedly: there’s nothing I can quite say or do that will really do Mandy justice. I can’t explain it properly, I can’t praise it without making it sound like I’m pulling shit out of my ass and I can’t breach its flaws without making them sound like strengths. Mandy is about as singular an cinematic expression as you can reasonably expect from a Nicolas Cage movie in this day an age, a blood-spattered howl of rage that also draws on grandiose aesthetics more often associated with shit like King Crimson and Dungeons & Dragons. By all reasonable metrics, Mandy should be an all-out campfest; instead, it barrels through until it comes out the other end as some kind of Viking funeral for the very concept of over-the-top.

It’s doubly surprising when you meet the man behind Mandy. Hirsute and soft-spoken, Panos Cosmatos exhibits little of his film’s raw, bug-eyed energy during our short interview. It’s hard to imagine him and Cage (who gives one of his most… most performances ever) really hashing it out on set, and yet here we are. The son of Greek-Canadian director George P. Cosmatos (Cobra, Tombstone), Cosmatos made his debut in 2010 with the trippy sci-fi film Beyond the Black Rainbow. Mandy even furthers that film’s explorations, a kaleidoscopic psychedelic nightmare that’s visually striking from minute one.

“The visuals come in early in the process,” says Cosmatos. “These are the kind of moods I’m in and the visuals I want to create. Even though it’s not specified on the page, I usually have a vision of how I want it to play out. My scripts usually have all the dissolves and fades written into them.”

Nicolas Cage plays Red Miller, a taciturn lumberjack who lives with his girlfriend Mandy (Andrea Riseborough) in a remote cabin in the Pacific Northwest. Red’s a man of few words, but life with Mandy suits him just fine – until a vanload of roving lunatics led by space-guru Jeremiah Sand (Linus Roache) arrive in town. Sand has seen Mandy and has decided that he “needs” her – which, in the parlance of this homicidal cult of Jesus freak meth heads, means nothing positive. Left alone and bleeding, a broken man, Red sets out to get a slice of quasi-Biblical vengeance.

“I just became interested in exploring the revenge genre,” says Cosmatos. “As I write these films, I try to sort of free my mind and allow whatever comes out of that core principle. In this case, it started to evolve into barbarian fantasy aspects. As a result of that, these sort of supernatural elements started to invade the concept of cursed artifacts being used in our world. It’s a sort of blending of a pseudo-real Pacific Northwest from my childhood with a D&D, ritual magic realm.” 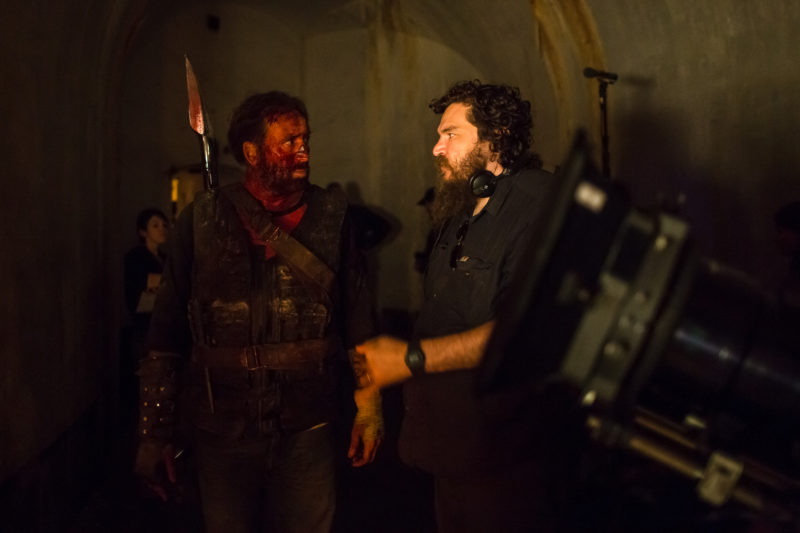 Cage and Costmatos on the Mandy set

“I don’t really like to put genre qualifiers on either of these movies I’ve made,” says Cosmatos when I ask if he considers Mandy to be a horror film. “They’re weird, personal explorations of my state of mind that happen to be built around a spine or structure of genre film. It’s an attempt to reconstruct an intangible feeling of seeing a film when you’re young, before you’ve formed a solid opinion of what is real and what is good and what is bad.”

It’s not great revelation to say that Nicolas Cage can and will give great outré performances once in a while; it’s not so much the quality of the performance that’s an issue but the movies they usually find themselves in. In Mandy, Cage gives a kind of atypical performance. For the first half of the film, he barely has any dialogue: he’s a taciturn, inward-looking man who would rather let others do the talking. When tragedy strikes in the second half, his performance is halfway between his most bombastic performances and something so entirely feral that you could mistake Cage for an actual demented woodsman. The interplay between those two halves make Mandy endlessly fascinating, even beyond the constraints of narrative.

“I feel like he’s an incredibly skilled physical actor,” says Cosmatos. “But by that I also mean in his way of expressing waves of emotional transition on his face in one take. To me, actors are like colors or musical instruments: once you understand the notes that they play, you can have them solo and build upon those permutations in interesting ways. As a fan, I wanted a Nicolas Cage performance that was one for the ages, but also one that felt organic to the film.”

Though it’s a genre film that’s likely to have a pretty small release (only one screen in Montreal), Mandy is in no way the kind of movie that Cage is associated with these days: low-budget boilerplate genre films in which he runs through, untethered, until reaching an unsatisfying conclusion.

“I think many of the projects undervalue his eccentric side,” says Cosmatos. “I think it’s been the case for most of the films recently. We came up with a throughline for the transformation for his character: he begins as a normal man, then he transforms into a raw nerve or more of an animal, but then at the last turning point, he becomes Jason Voorhees. He becomes a sort of undissolvable deity, with a kind of statuesque presence. He actually does an homage to Friday the 13th Part 7 at one point.” ■