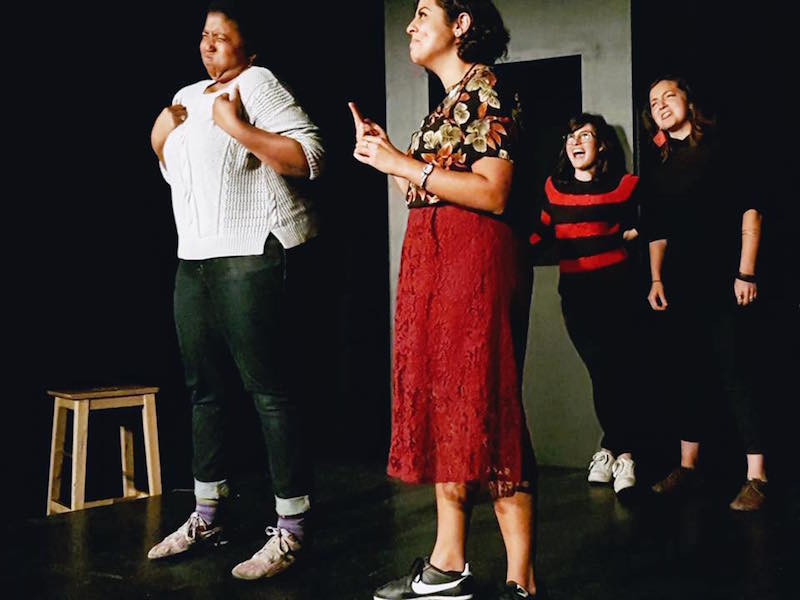 Colour Outside the Lines. Photo by Xavier Tolentino

Late last week, L.A.-based comedian (and JFL alum) Jen Kirkman posted a lengthy Twitter thread about being a comedian who is also a woman in the #MeToo era, in which she noted that when women comedians are constantly expected to talk about abuse and injustice instead of their own projects, it hurts their ability to just be funny. At the same time, she wrote a few tweets later, “I just can’t not also use [my platform] for this.”

The organizers of Montreal’s women-in-comedy festival Ladyfest, whose fourth annual edition is taking place this week, know this tricky balancing act all too well. The reason it’s critical to have a comedy festival dedicated to women and non-binary folks in the first place is because these performers still face a ton of barriers to making it on stage and getting programmed into line-ups for reasons that need to be addressed. For Ladyfest’s producers, the festival is the perfect arena to create space for women and non-binary comics to take the stage and also to just experience the sheer joy of a lot of great-ass comedy.

“Ladyfest isn’t just people on stage hammering on about feminism,” laughs festival director Deirdre Trudeau. “It’s about anything! Butts or dogs or whatever people feel like talking about. Maybe because it’s Ladyfest people might feel a little more comfortable to talk about issues around feminism or racism, but the point is not to hammer a political agenda down anybody’s throat — it’s just to have a fun and beautiful release together and laugh in a comfortable situation.”

This year’s Ladyfest line-up includes a host of events all over the comedy spectrum including stand-up, sketch, improv, short films and storytelling. Recurring Montreal favourites like the Sketch Republic and multimedia show Video Island will present special Ladyfest editions in addition to original events like Thursday’s Woke Tales (focused on storytelling) and Saturday’s All in All Out (a variety show sampling many different comedic formats).

Highlight events include Friday night’s Taking What We Need fundraiser show Standing Up for What We Need, featuring performances from founding TWWN member Estelle Davis (who spoke to Cult MTL about TWWN earlier this year), plus host Aurora Knaut, lesbian speed-dating coordinator Catherine Colas and more members of Montreal’s trans community serving up a self-described “evening of empowering shade.”

Saturday night will see Toronto’s monthly comedy show Yas Kween — focusing on women of colour and featuring their house improv troupe the Kweendom — teaming up with Montreal’s own POC-focused show Colour Outside the Lines to present a huge line-up of no less than 15 stand-up and improv performers — all of whom are women of colour or ethnicity and hail from Montreal, Toronto and Ottawa.

“There’s almost no show in Montreal now that could boast a line-up that features that many women of colour,” says Colour Outside the Lines producer Sara Meleika. “We at Ladyfest this year really tried to feature artists that we hadn’t worked with before and really highlighted voices that we don’t often hear in the mainstream comedy scene. We’re really trying to push ourselves to keep growing as a festival.”

Meleika stresses that without inclusive spaces and opportunities, many people might never get the support they need to develop their craft. Given that Yas Kween regulars like Nour Hadidi and Hoodo Hersi made it into this year’s Just for Laughs festival, Meleika notes that shows like Yas Kween and Colour Outside the Lines are “definitely creating a space where women of colour are able to perform their art while feeling supported in a way that they haven’t before.”

For Knaut, producer of Standing Up for What We Need, any opportunity for trans individuals to share their perspectives is validating for each other and helps to build understanding and community with those who haven’t shared the same experiences.

“It’s making a space for ourselves and not really worrying what the outside world thinks about it, because it’s not theirs, it’s ours,” she says. “We exist and we are real. Therefore the world thinking the way it does, that’s the joke. It’s funny that I was uncomfortable with this, and it’s funny that you were uncomfortable with this, so I use humour to validate my body and make people question or deal with what might be going on in their mind. My favourite shows are where I can talk about an experience I had or a feeling I had, and after the show a girl comes up to me and says ‘I totally know what you mean, and thank you for sharing that because I thought I was alone.’”

As recent social progress has made it easier for more people to find their place in comedy, whether onstage or in the audience, Trudeau doesn’t think anyone should feel alone or excluded from comedy anymore.

“I’ve encountered a lot of people who had just written off comedy as something they weren’t interested in because anything that they’d seen or heard of was more of the boys’ club kind of comedy,” Trudeau notes. “But now, just look at [Hannah Gadsby’s] Nanette — she’s created a whole new audience who weren’t interested in comedy before, but who are interested in what she’s doing.

“I’m so pleased and thrilled and happy about the Ladyfest line-up that we have. Comedy is a situation where people can approach and discuss topics that are not comfortable, real things that are happening in society now, but make it approachable or understandable — a pill that the audience can swallow because it’s washed down with laughter.” ■

Ladyfest takes place through Sept. 9 with Thursday events at Montreal Improv (3697 St-Laurent) and Friday through Sunday events at Théâtre Sainte Catherine (264 Ste-Catherine E.), from 8 p.m. nightly. Tickets cost $12 for most shows, or $40 for a full festival pass. See ladyfest.ca for full details.