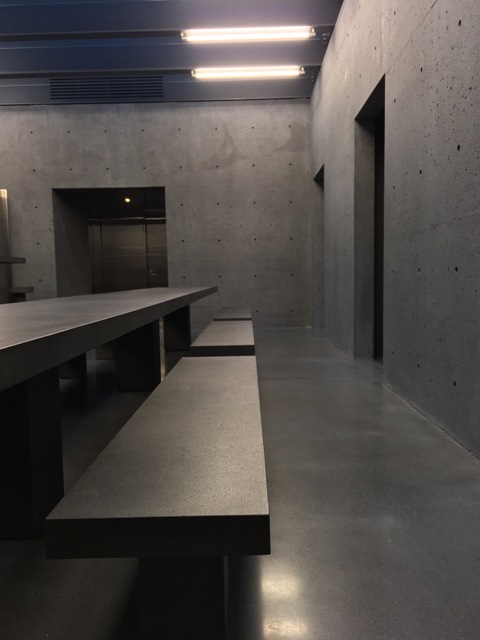 Normally I wouldn’t find myself in the SSENSE department store. I was put off by the anticipatory ads that ran online, breathy and frenetic footage of models’ side profiles and flashes of textiles plucked from the urbanity of the ’90s. I was uneasy with their first floor, sparsely stocked with racks of clothing that evoke a store’s bargain section until looking closely at the price tags, designed like a Concordia Fine Arts student’s first exhibition on the concept of workshops. Then again, it wasn’t the $650 t-shirts I expected to be welcoming, but the SSENSE Café on the fifth floor. I didn’t bother taking the stairs.

Located in a stark, brutalist space of concrete lit by a combination of fluorescence and skylights, film scouts ought to take note of its sleek, post-apocalyptic vibes: I was waiting for the stainless steel doors of the elevator to open at any moment to reveal an Equilibrium-era Christian Bale about to artfully blow my brains out with gun kata.

Atmosphere aside, it’s the food, coffee, cold-pressed juices and bubbly drinks from the mind of Jason Morris that acts as a more common drawcard. He and his partner Kabir Kapoor have been making strides this year with the opening of Pastel — the brighter counterpart to their comparably dark restaurant le Fantôme which opened in Griffintown in 2015 — and this café.

The menu here’s a far more pared-down version of what could be found in either of Morris’s kitchens to date, likely structured in such a way that each of its dishes are quickly replicated for quicker consumption, rather than something that’s painstakingly prepped throughout the day for service. It’s far from cheap, however, as dishes will lean minimalistic without being chintzy and still contain the conceptual playfulness that the chef is known for. All of this comes full circle when thinking of the impetus behind Pastel, as the food here’s the sidewalk chalk that colourfully brightens an otherwise grey and nearly drab landscape. All that, and the pricing is a razor-sharp contrast to everything else sold in the building.

Having visited in the early evening, I wasn’t planning on trying some of the breakfast-centric options available (granola bar with mixed greens, brioche toast with pine butter and pine sugar), but it’s hard to avoid. Starting out with the arctic char, it’s a ring of flesh smoothened out with crème fraiche and cucumber syrup, topped with everything bagel seasoning ($12). A funny take on bagel and lox, the cubed fish was soft to the bite with its spices adding pleasant, familiar flavours and the syrup a low-lying extra element. Wanting to contrast this plate, the wagyu tartare was ordered ($14). It’s simple in its execution, the meat left to its flavourful devices with the exception of an enhancement through shallot and garlic, coupled with rye chips that are deceivingly soft and sweetened with honey, finally given a pop of colour via edible flowers.

Having had enough with proteins, we ordered the radicchio salad ($11). “Someone’s ready to spend some mon-ay,” the server quipped when he noticed my last two dishes weren’t the end of my visit, a remark that made my dining partner laugh for hours after. The salad’s a one-by-one layering of bitter, red fronds with irony leaves of spinach, white grape balsamic, a dusting of coffee grinds and pomegranate seeds. I took the coffee as a bit cloying at first as the radicchio was bitter enough, but when everything was stacked into one bite, it was a refreshing combination in both delivery and flavour. I would have personally gone with a drizzling of pomegranate syrup or juice, as the seeds could be difficult to pluck and incorporate, but all in all a good item.

By now wanting something a bit more substantial to top lighter options, and with the pork shoulder not yet available (and hopefully the oven has now arrived; perhaps I visited too soon?), I opted to see what Morris had in mind for a shakshuka ($8). It’s normally a one-pan North African dish of charred-to-caramelized tomato sauce with eggs poached directly into it, served with crusty bread, and now found on many-a menu in Montreal since Brooklynian brunch spots went crazy for it — it’s also easy to make if you have a cast iron handy at home. The café’s version is a quicker take ladled onto a slice of bread directly, the sauce being one half tomatillo and the other broiled red, dressed in pine nuts and sprigs of coriander. My only suggestion with this one would be to order the bread on the side and toast the hell out of it, but that’s a matter of preference. This was quickly scarfed down, switching back and forth between green and red bites that let the tomatoes speak for themselves; it was made all the richer with egg yolk and the occasional creaminess of pine nut.

While it seemed like a good time to go at that point, dessert had to happen. The cheesecake ($5) is a small module of a cake styled after the Japanese Hakata style in how it was free of a crust underlay, and less sweet, save for the freeze-dried fruit sugar sprinkled on top, which was dominated by the taste of passion fruit.

To date, I’ve only known a handful of cafés that have made a point of having a menu executed well enough to entice a stay that surpasses a few nursed coffees and burdening the bandwidth. Even among those, it’s often a plain albeit tasty range of soups and salads, stews and sweets. The places that offer anything more elaborate are probably misusing the term “café.”

SSENSE Café from Pastel is a definite curveball, however; the dishes go beyond the typical while still being familiar in form, challenging expectations and providing reasons to return, one of which is — excuse me — a damn fine cup of coffee. ■