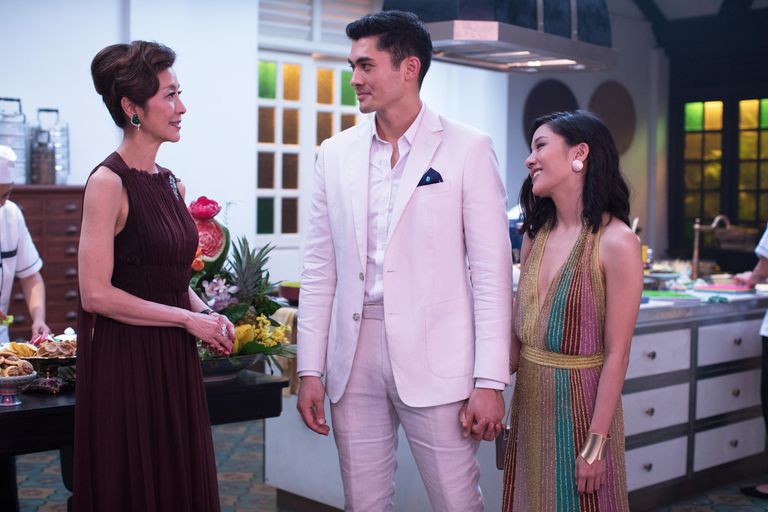 I am used to seeing people that look like me in movies. Hell, Judd Apatow has basically made a career out of movies starring guys that look like me. It’s nice to be able to relate to these characters, but past the age of maybe 21, when my own personality had more or less found its permanent form, it stopped being a requirement. The point of art should never solely be to reflect yourself back at yourself; I spend enough damn time with myself that that shouldn’t be a criteria at all.

I’ve always found the rigidity of escapist expectations baffling: audiences are down to watch some guy ride a dragon, but the guy riding the dragon can’t just be an audience surrogate in the broad sense. He has to look, apparently, like the majority of the people sitting there and watching the movie. (No one, apparently, sides with the dragon in this particular scenario.)

All this to say that I think it’s thoroughly baffling that society has made it so that a movie as narratively and thematically square-down-the-middle as Crazy Rich Asians is becoming a watershed moment in the history of representation. It’s unarguably a good thing that an American studio has made a wide release with an all-Asian cast for the first time in 25 years (!), but it’s a little bit weird that this massive shift in the discourse is revolving around a rom-com version of Dynasty set in Singapore. Those afraid they couldn’t possible relate to a movie starring people who don’t look like them and don’t speak their language shouldn’t be worried: the real unrelatable part of Crazy Rich Asians is that nearly all its protagonists are billionaires, and that the lonely commoner Cinderella character is only a measly economics professor at NYU.

Rachel Chu (Constance Wu) has been dating fellow prof Henry Young (Henry Golding) for a year when he asks her to accompany him to his friend Colin’s (Christopher Pang) wedding back in his native Singapore. What Rachel doesn’t know (but seemingly the entirety of the world does) is that Henry is actually a member of the richest and most powerful family in Singapore, worth untold millions and heavily pressed by his icy mother (Michelle Yeoh) to take over the reins of the company. As Rachel discovers the world of Singapore’s uppermost crust, she also discovers that most people in Henry’s entourage have a very particular idea of who Harry should be marrying and how he should wield his tremendous power and privilege — and none of them involve Rachel.

Crazy Rich Asians is essentially a soap opera in the Dynasty or Dallas mode, focusing on that one thing that people who have all the money in the world cannot solve with a check: those pesky affairs of the heart. Credit where credit is due: a lot of Crazy Rich Asians revolves around the particularities and expectations of Asian families and the way that privilege is handled and maintained in that world. Those details are fascinating and do a lot to flush out the world of the film, but the fact is that the entirety of the narrative is predicated on a simple wrong-side-of-the-tracks romance that dutifully hits its beats every step of the way.

Crazy Rich Asians is very classic Hollywood in that way, an impossibly slick film filled to the brim with glitz and glamour the likes of which you can’t possibly imagine existing in the real world. It’s filled with the tackiest and most excessive gold furniture, fountains and innumerable other excesses. It’s a modern fairytale where the monarchy has been swiftly replaced by anyone with a couple of hundred million to chuck around, and it’s no surprise that it unfolds in much the same way. By the time one of the supporting characters breaks up with their partner and answers “I own 14 apartment buildings” to the question “Where will you go?” you get a pretty good idea that relatability is not really a chief concern here.

In that respect, Crazy Rich Asians mostly works. It’s a fable for late capitalism that’s all party scenes and evening gowns and male leads taking their shirts off and moving to the front of the shot to make sure you got it all. Movies like this are also a pleasure of the silver screen; they’re the shopping spree version of a Mission: Impossible movie, designed to tick the same boxes with pristine marble countertops and impeccably cut suits that those films do with exploding helicopters and chase scenes. What I do question is, really, the relevance of the tale, which ultimately has the same weight as any other romantic comedy you may have seen and forgotten. I’d use examples, but these films were not made to be remembered.

That’s the point, of course. Crazy Rich Asians proves that representation shouldn’t only come in the form of portentous Oscar bait vehicles and tragedy porn. If cinema is really going to be inclusive and tell stories from all points of view (the jury’s still out on this one, though it’s looking significantly better these days than ever before), then it’s sure as hell going to tell this somewhat superficial yass-queen empowerment story and hit exactly the beats that it’s expected to hit. It’s hard to fault any movie that: if there are going to be quadrant-pleasing rom-coms (and there will), then you should absolutely mix it up. The world demands it. But I have to admit that even the best of these movies has limited appeal as far as I’m concerned — and Crazy Rich Asians isn’t the best of these movies, not by a long shot.

But the beauty of this thing is that absolutely no one needs to know what I think about it. ■