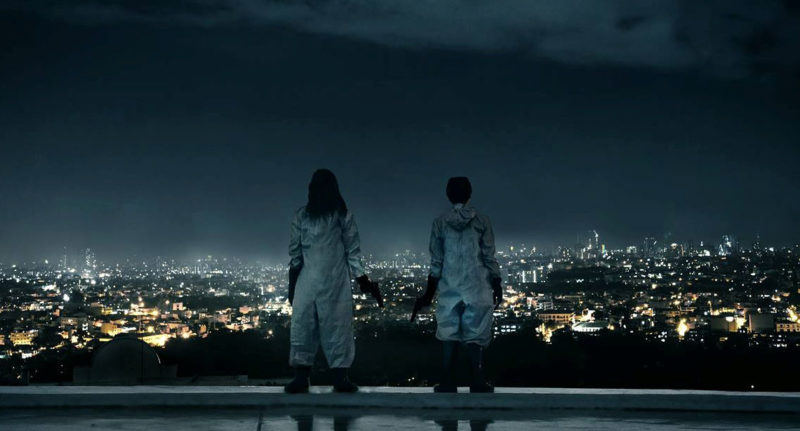 Forget exotic images of tropical escapes to the Philippines. This is a grim tour of its seediest underbelly, a fictional portrayal of crime-riddled Philippines under current president Rodrigo Duterte and the controversial war on drugs that promotes killing dealers and users.

Directed by Mikhail Red, neo-noir thriller Neomanila tackles this reality through the eyes of Toto (Mondomanila‘s Timothy Castillo), a young street thug trying to raise money for his brother who is wrongfully rotting in a local jail for someone else’s crime. Orphaned and threatened by a small-time drug dealer, Toto is taken under the wing of Irma (Eula Valdez), an assassin tracking down dealers to kill them in the middle of the night. She tries to show her new protégé what it takes to survive on the streets.

Manila might be a nice place, but definitely not according to Red. It’s sweaty and dirty, dark and cluttered, vicious and unwelcoming. He takes you up and down shabby apartment buildings, through the city’s scariest alleyways and dingiest side streets. There is no hope in Red’s Manila. One scene in particular will have you shaking your head and hoping some light might shine through, save at least one of these characters and turn things around.  Alas, Neomanila is relentless.  It’s unforgiving, heartbreaking and graphically violent, but most importantly, it’s pretty damn good.  (Roxane Hudon)

I Have a Date With Spring 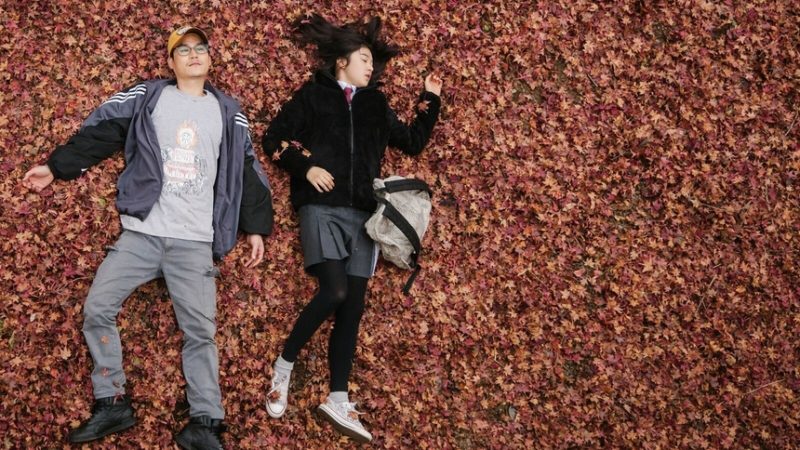 There’s something, I think, a little too nakedly honest about a movie that begins with a director character struck with writer’s block. While it’s about as good a reason as any to tell a story, it also feels like the filmmaker is showing their cards a little early in the game. Maybe I’m just saying that because I Have a Date With Spring is a movie that begins with writer’s block and follows it up with generally incoherent vignettes that have the feeling of a writing exercise above all else.

Though all of the segments in I Have a Date With Spring are directed by the same person, it has a very similar lack of cohesion found in anthology films like V/H/S or Nightmare Cinema. Under the guise of a depressed film director who is visited by “aliens” (they just look like tourists), Baek Sung-bin explores the lives of three people whose birthdays fall on the eve of the end of the world. A lonely schoolgirl, depressed professor and harried mother all receive visits from strangers who bring them a “present” as extinction looms.

It’s a strong premise, but none of the sequences feel particularly connected or relevant, bouncing from syrupy tweeness to genre pastiche to little avail. Props to Sung-bin for basically textually pointing out that these things are very tangentially related, but I Have a Date With Spring never builds up to a satisfying whole. (Alex Rose) 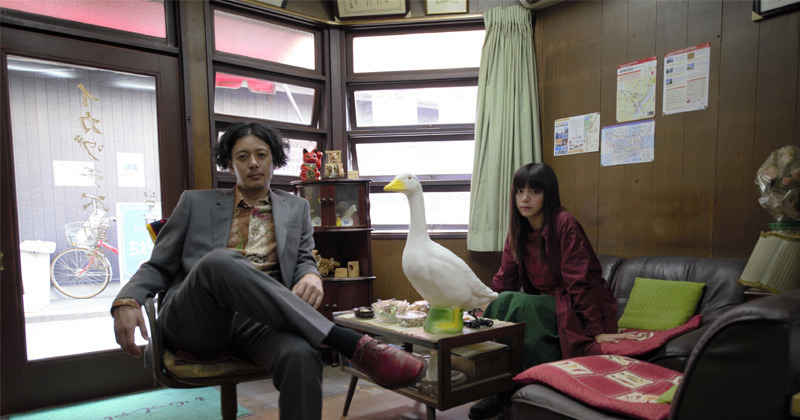 She can see dead people and they’re mostly quirky.

Introverted Miko (Elaiza Ikeda) does her best to pass through life without talking to anyone.

Her illustration book and giant goose lamp in hand, she works for her charmingly louche uncle Goro (Joe Odagiri) as a “room launderer.” The law requires landlords to inform new tenants about recent deaths on their properties. Miko is hired to occupy apartments from recently deceased people, making sure the rooms don’t lose their market value! However, her transient lifestyle is changing — the dead occupants’ ghosts have started appearing to her and worse, they want to talk to her!

As a quirky supernatural drama, Room Laundering takes the ghost-whisperer genre in a lighter comedic direction. The hallmark of a heroine being haunted by her own past is still here, but Kenji Katagiri’s movie slaloms around the usual detective and exorcist plot beats. There are no spectral monsters here, just lost souls stuck on Earth, looking for someone to talk about their own life and death. Miko finds herself to be the revenants’ only confidant and helper to reach the great beyond.

A typically gloomy genre is presented here with intermittent touches of Amelie-like whimsy but Room Laundering’s disinterest in ghost-mystery solving turns its leading lady into a passive character, slowing the 109 minutes running time to a crawl. It doesn’t feel like an eternity trapped on Earth, but when the movie ends, we feel ready to move on. (Yannick Belzil) 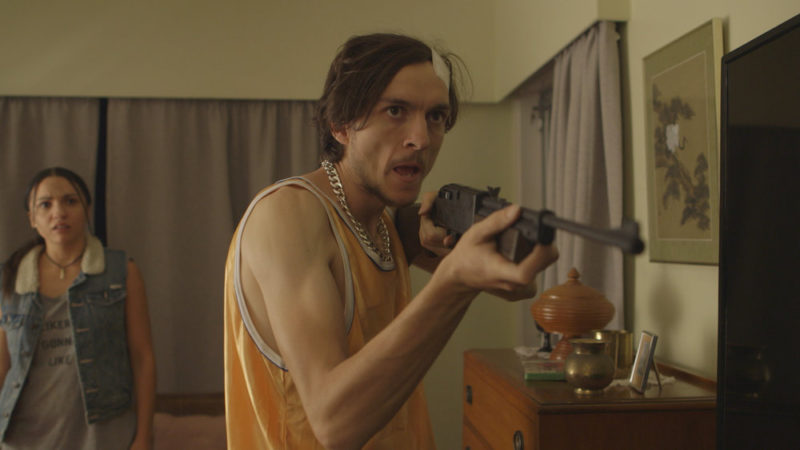 Petty criminal John (Anton Tennet) attempts to mastermind his own heist behind his gang leader boss’s back. When said-kingpin Shelton (What We Do in the Shadows‘s Johnny Brugh) finds out and sends his ragtag bunch of henchmen after the failed gangster, John proves to be harder to catch than imagined thanks to his discovery of a time-travelling bracelet.

This fun film tones down the thrill of time travel by making its protagonist only capable of going back a few minutes. As such, one of the main gags of the film revolves around John meeting up with Johns of the not-so-distant past and ganging up to try and thwart those running after him/them.

There are a lot of playful ideas here and they mostly work. John is just too nice and mild to be a proper bad boy and that leads to multiple ridiculous situations. Van Dammen also introduces supporting characters who vary in absurdity, the stand-out being a wannabe guerrilla warrior nerd of sorts who seems to live in a storage container (played by Simon Ward). I have to say I kept waiting for bigger laughs. With such a simple but smart premise, the possibilities to be sillier, darker and more ironic seem endless. That being said, this is only Van Dammen’s second feature and with ambitious and amusing projects like this one, I’ll definitely be keeping an eye out for what’s next. (RH) 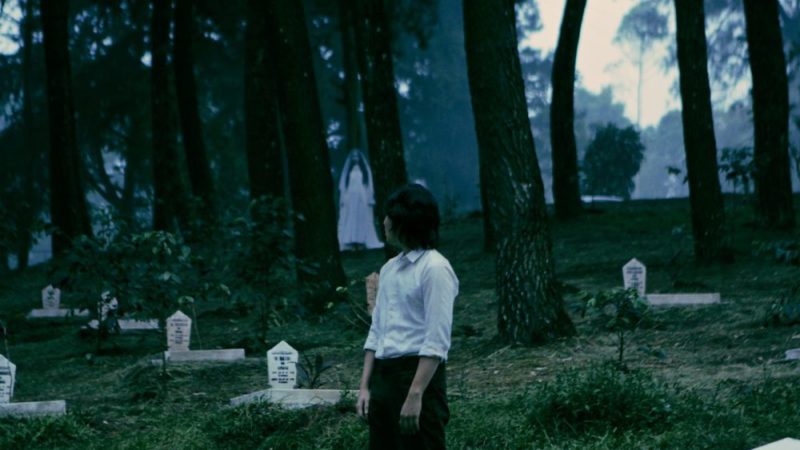 One of the great pleasures of Fantasia is to explore the way genre films crop up in other cultures. Everyone has a concept of the Devil, of the living dead and of demonic possession in their own culture, all of which comes across in films that are generally very similar across countries and languages. Every country has their own Exorcist, in other words, although Joko Anwar’s Satan’s Slaves is closer to being Indonesia’s answer to Insidious or Hereditary, with all of the slickness that entails.

When their mother dies, the members of a struggling family (the oldest is 22 and the youngest is six) find themselves assaulted by spirits. A cursory investigation reveals that their mother may have been in with a cabal of Satanists, and her pact with them not only resulted in each of her children’s lives, it’s also something the cult is likely to come back for now that she’s dead.

All the staples of the genre are here: dreams-within-a-dream, a little deaf kid, an exposition-spewing shaman/hippie, eyes turned back into heads, levitating bodies, etc. It’s all a little familiar even within the genre, but it’s also worth noting that the film is a sequel/prequel to a classic ’80s Indonesian film, so the story has been dragging around these kinds of clichés for a while. More importantly, however: Satan’s Slaves is surprisingly effective, a slick haunted-house ride that manages to consolidate its heavily American style with its Indonesian personality. (AR)