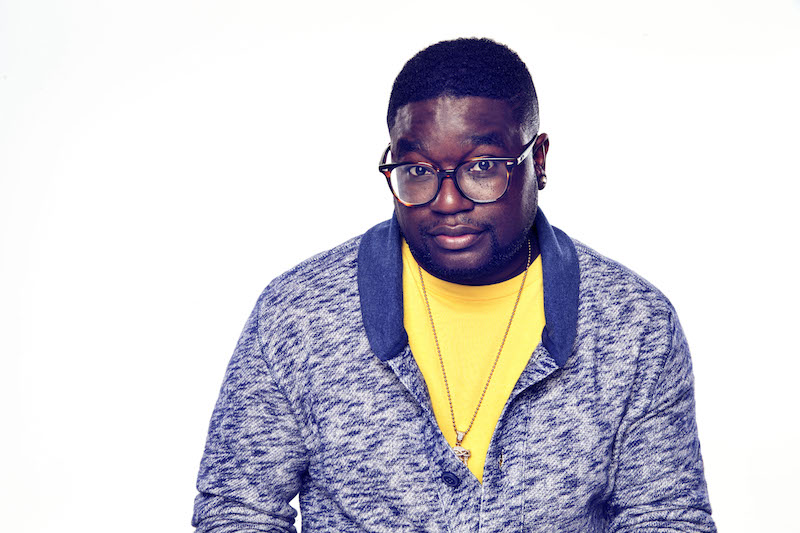 If you’ve never talked to Lil Rel Howery, your life is the poorer for it. The guy radiates a goodness that comes from a place I’m not sure most of us have access to. Like, I talked to him for twenty minutes and was in a good mood for two days.

That said, it’s pretty good being Lil Rel Howery these days. Over the past few years his star has risen to the point where his face is unavoidable and his appeal is undeniable. Perhaps most associated with his turn as TSA Agent Rod Williams in Get Out, it merits mention that Howery probably doesn’t get that job or his starring role in Uncle Drew without putting in the work on The Carmichael Show — which never, ever got the respect it deserved.

This fall, Howery will be trotting out Rel, a multi-camera Fox comedy based on his own life. This afternoon, he’s being honoured as the Breakout Comedy Star of the Year at the Just for Laughs Awards Show. Tomorrow, he’ll be rocking his own show, taking a breath, then performing on the Tiffany Haddish Gala.

So, yeah, Howery’s as hot as a supernova right now, but if success has gone to his head he’s hiding it pretty well. The guy I recently chatted with is just a really nice dude from West Chicago trying to be a person in the world.

Dave Jaffer: A lot of comics say they enjoy coming to Just for Laughs because it offers them a chance to see old friends. Is that why you keep coming back?

Lil Rel Howery: I want to come back and give the opportunity to comics who just come to the festival. You know, friends who [aren’t] a New Face, who’s not on any show, who are just kind of out [there] to see if they can jump on something. One of the greatest things I look forward to as I go on doing stuff is giving opportunities to those comedians who just come to learn and just soak it in. You don’t [often] get a chance to be around these studio executives, or even the comedians you look up to, and it’s the one place you can actually have a great conversation with them, so I think, “Okay, let’s add on to that. Let’s create a show.”

LRH: I might meet somebody in the lobby, and he’s a good kid, [so] I’m like, “you’re going up tomorrow.” That’s what I want to do. Because it’s such a sacrifice when you’re first starting out and spending everything you have to come to this great festival. I thought it would be fun to just create an opportunity for all those comics who do that. That’s what I look forward to: meeting these new, amazing comics I don’t know.

LRH: I don’t necessarily feel like it’s been like that, you know what I mean? (Laughing) It’s still not as diverse as it should be and that’s just the honest-to-God truth. Sometimes we tend to see stuff as based on the success of other things, but I think we have way more to do. When you think about it, we’re just starting to see some of the really good black comedies on TV, we’re just starting to see even some of the African-American comedy movies get some love from the festival. With me and Tiffany [Haddish, the Just for Laughs “Comedy Person of the Year”], it’s kind of a breakthrough year even having us honoured with an award because it’s not always like that. You have to put in so much work as an African-American comedian before somebody even recognizes you.

DJ: On top of Get Out being a great film and a great commentary, it made a lot of money against what it cost to make. Girls Trip, same thing. Why? Are black writers, directors, comics, and actors really only just being seen as being bankable?

LRH: Get Out, the budget was only $3 million, you know what I mean? They couldn’t really pay us. (Laughing) We all did it because we loved the script. The back-end was beautiful, don’t get me wrong, but up front, I don’t even remember what I got up front, that’s how small it was. (Laughing) But it’s one of those things where we took ownership of it, like, “Let’s just do it, let’s just make it good. We don’t need a big budget to make it good, what we do need is great casting to make it good.” Which is why when I think about what [Get Out writer/director] Jordan Peele did, what [Girls Trip producer] Will Packer did, [I think of] casting. When Girls Trip cast Tiffany, it was a great move. You put this fresh voice amongst these other great [performers]. Even with Get Out, Jordan gave me an opportunity. His groove was, “hey, there’s a lot more comedians out here, you don’t always have to use the same people.”

DJ: If you had to describe it, what is your comedy about? What is The Funniest Thing™ to you?

RH: My comedy is just honesty. I love telling stories, I like talking about where I’m from, which is the West side of Chicago. I’ve always been very specific about what I talked about, and it really worked for me even when people told me it wouldn’t work. It was a couple of Chicago comedians that told me that [people from] Chicago [were] the only ones that were going to get it and blah blah blah. And I didn’t want to listen to them, because I was like, “well, New York comics love talking about New York, ain’t nobody telling them to stop!” I don’t know what a bodega is, but they talk about it! Like, there’s nothing wrong with that. We’re all from these different great places. That’s what makes a great storyteller — when you can paint a picture of where you’re from and bring people into your world.

DJ: In the fall, you are debuting a show on Fox. What’s this show going to be about or try to do? What excites you the most about this show and this opportunity?

RH: This is going to sound crazy, but I don’t think about it. Like, Uncle Drew came out and it did well and I didn’t even want to know. I did it, it’s what it is, people enjoyed it. Doing this show is so personal to me, and it’s almost selfishly personal. The audience, I hope they love it, but this is for me, and it’s for other single, long-distance dads. This is uniquely about my life, so I just wanted to show a dad going through a situation like this and still loving his kid, and just trying to figure his life out and honour his B.S. A lot of times when you see a comedy where somebody gets cheated on they’re like, “I’m the victim,” and I’m like, “Why? Why did they cheat on you? Explore yourself.” Which is what I really did in my real life. It’s going to be fun displaying that. I wanted to make a sitcom that I would like to watch, you know what I mean? I’m a fan of the sitcom, and for a while, outside of The Carmichael Show to be honest with you, people ran away from the old format of a live studio audience and just being funny right away. Single-cam gives you a chance to force the comedy on people, right? Like, “this is what we’re telling you that’s funny.” Multi-cam, that audience is there. They’ll let you know if it’s good or not. ■