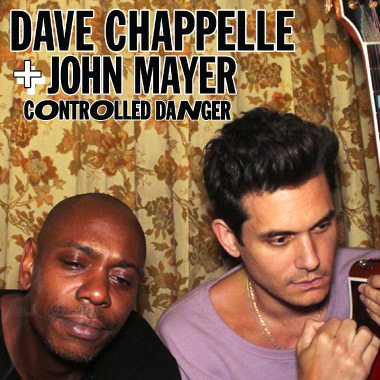 Dave Chappelle and John Mayer brought out a fire-breathing dragon at their Saturday night show. They also revealed the cure to cancer and brought Richard Pryor back from the dead for their closing number.

Okay, so maybe none of these things actually happened, but there is no proof that they didn’t. Upon entering the Bell Centre, attendees were forced to place their phones in Yondr locking pouches to allow for an electronic device-free evening.

The duo’s Controlled Danger tour has only had a few past dates, all of which were held in California. Its stage setup replicates a bar, with the performances feeling like you are catching up with old friends at your favourite pub. In fact, some of Chappelle’s and Mayer’s own old friends participated, with Chappelle’s Show favourite Donnell Rawlings providing a high-energy warm-up to kick things off right.

Mayer was first up, and his 30-minute set consisted of himself, a control panel and a trio of guitars. Two new tracks were heard including the warmly-received “New Light,” which was produced by hip-hop legend No I.D.

As Controlled Danger is in part a comedy show, the Connecticut-born talent found many ways to incorporate humour into his stage time. Whether covering Toto’s “Africa” — which has essentially devolved into a meme — or begrudgingly talking about the terrors of turning 40, Mayer has a way with wit.

Soon after came Chappelle, who blazed through a 45-minute set of his usual comedic stylings. The superstar comic has had quite the history with the festival, and while his 2013 return to the city was rather tumultuous his 2015 performances put him right back on his feet. From school shootings to #MeToo, Chappelle offered commentary on issues that are the cause of concern for today’s generation.

The latter topic made some spectators feel uncomfortable. “You’re an asshole,” one woman screamed after Chappelle told jokes downplaying the severity of sexual harassment and misconduct allegations made against Louis C.K. and Jamie Foxx.

The show concluded with a thunderous hour of Mayer and Chappelle riffing off of each other, most of the material being dished out on the spot. The two proved to be stronger together than apart, their respective levels of self-awareness working as key contributing factors to Controlled Danger‘s success.

In 2018, living in the moment feels stranger than ever. We have an ever-growing urge to share our activities with the world, especially when attending events. Dave Chappelle and John Mayer’s Controlled Danger allowed for a unique viewing experience, both in its demand for a present audience and in the unconventionality of its format. ■