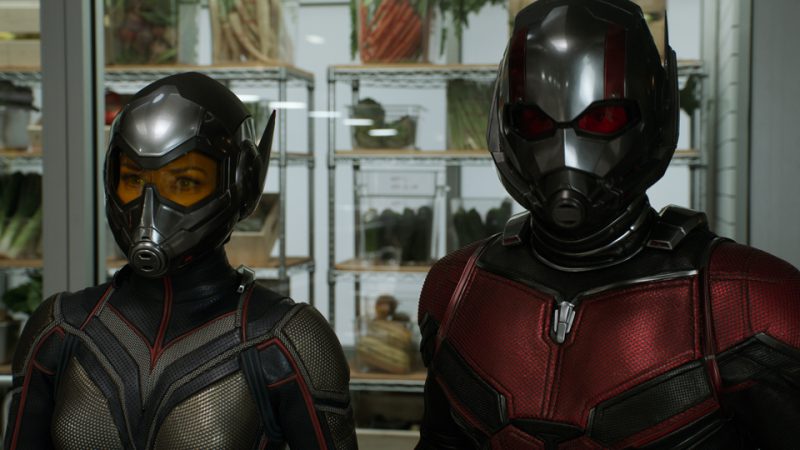 Evangeline Lilly and Paul Rudd in Ant-Man and the Wasp

There’s a case to be made for Ant-Man as definitely the dumbest character in Marvel’s roster, and there’s a case to be made for him as the most fun. The roots of Ant-Man exist in a very different comic book world — one where, no matter how you spin it, he’s still a guy in a shrinking suit who has to ride an ant around. It gives him a fairly limited breadth and scope of things he can actually do within the Marvel Universe, but that limited scope also allows them to go somewhere else.

The Ant-Man movies are the smallest and most fun of all the Marvel films, with a kind of sense of humour and wonder that’s also fairly out of step with the current vibe of blockbusters. Ant-Man and the Wasp feels more like a movie from the Men in Black era of big-budget filmmaking, a colourful and freewheeling film that has more ideas than lore to impart — which would be an even more welcome respite if it wasn’t for the fact that this second installment has altogether too much in common with its predecessor.

Scott Lang (Paul Rudd) is rounding out the two years of house arrest he’s been put under for assisting Captain America in his extremely unpatriotic treasonous actions in Captain America: Civil War. It has greatly hampered both his family life alongside his daughter Cassie (Abby Ryder Fortson) and his fledgling security business alongside his reformed criminal associates (Michael Peña, David Dastmalchian and Tip ‘T.I.’ Harris). Kept on a very tight leash by the fed (Randall Park) assigned to his case, Lang really just wants to ride out what’s left of his sentence, a goal made impossible by the resurgence of Hope van Dyne (Evangeline Lilly) and Dr. Hank Pym (Michael Douglas) in his life. In the last few years, they’ve been running a covert operation meant to get Pym’s wife / Hope’s mother (Michelle Pfeiffer) out of the Quantum Realm that she’s been stuck in for over 30 years. This involves not only meddling with an unctuous criminal kingpin (Walton Goggins), but also reconnecting with one of Pym’s old associates (Laurence Fishburne) and his troubled protégée (Hannah John-Kamen).

Ant-Man is essentially a comedy, and thus Ant-Man and the Wasp subscribes to the comedy rules of creating a sequel: give them more elaborate versions of what they already liked and raise the stakes of things without actually raising the stakes. Ant-Man’s always been treated as a peripheral character; while the stakes here are definitely larger than in the first film (which essentially came off as a heist film) and it’s definitely more fun to watch a superhero movie where the protagonists aren’t zipping around in half-space throwing fireballs at each other, it never seems entirely clear what we’re trying to achieve here. It sticks to the tried-and-true Marvel formula of having a villain introduced in the first act that turns out to not really be the major villain of the piece, and it straight up re-uses some comic conventions from the first film (namely Peña’s character’s tendency to tell long-winded stories by doing the voices of everyone involved, which is then laid over the actual characters acting out those scenes) to diminishing returns.

What Ant-Man and the Wasp does offer above other films of its ilk is a real elastic propensity for inventive action staging. In the simplest terms possible, Ant-Man can get real small or real big and the suit has some power, but that’s about the extent of it. Introducing the Wasp (whose suit, for one, has wings, meaning she doesn’t have to bum a ride from a weird ant) essentially forces the film to exploit those limitations in new and interesting ways, making Ant-Man more or less a supporting character in his own film.

It leads to some pretty inventive and delightful scenes, including one in which a malfunctioning suit leaves him toddler-sized and another in which he becomes so huge that he’s basically rendered into a blubbering drunken mess from the sudden transformation. It also makes the Wasp into a protagonist — the first ever female protagonist in a Marvel movie, if you can believe that — that holds her own. Ant-Man and the Wasp’s big set piece is in fact a car chase through San Francisco, which director Peyton Reed fills with enough detail and humour to offset the fact that car chases through San Francisco have essentially become their own genre at this point.

If you think of superhero movies as a fairly limited genre unto themselves rather than the portentous “what all movies have become” doomsaying perpetrated by the finest purveyors of clickbait, Ant-Man and the Wasp is a super-fun variation on the extremely familiar. It’s about as well-executed and as inventive as a popcorn movie made under rules more rigorous than Dogme 95 could ever be, but that’s also part of the problem. As great as its individual parts may be, Ant-Man and the Wasp is an afterthought in many regards, a dutiful filling in of the blanks that promises it’ll fly with its own wings and ends up piggybacking the bigger, more “stable” franchise. The best moments in Ant-Man and the Wasp suggest a series that could forge its own path, but the post-credits scene cements the fact that the MCU isn’t too generous with that kind of freedom. ■

Ant-Man and the Wasp opens in theatres on Friday, July 6. Watch the trailer here: