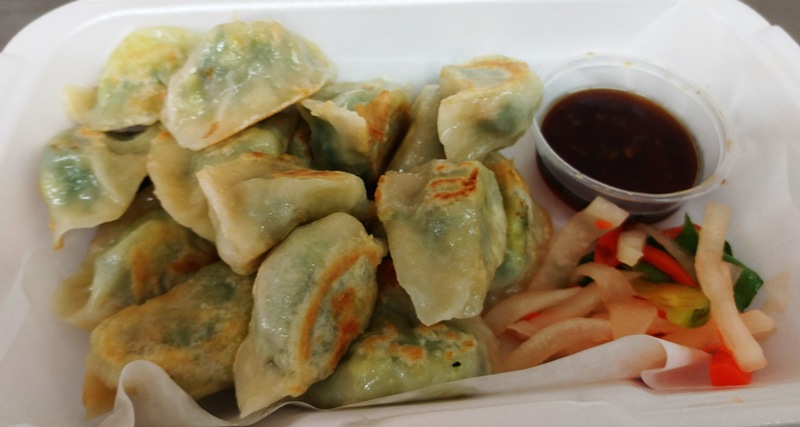 Journalism students and Royal West/Loyola grads like to think they know a thing or two about eating near Loyola and Westminster. There’s Souvlaki George, le Petit Tokebi and Dagwoods in one direction, and the famed Burger de Ville or a sushi roll wrapped in foil at Deli-Pat in the other. (Or even the mini Jamaican patty oven in Quality Fruit Bowl.)

But besides specials at rock bottom prices to appeal to students, what’s there for the rest of us? Quite a lot, it turns out.

Forget NDG for a second. For this food crawl, I covered a nearly three-kilometre trail beginning at Westminster Avenue and Côte-St-Luc Rd. — i.e. where MoWest becomes Côte-St-Luc — all the way down to the 20 West’s lighthouse: Lafleurs on St-Jacques. Get off at Vendôme and take one of the many buses to MoWest station. You can walk it from there. Much of the food around the area can be eaten while walking because of the active student populations, so it’s possible to hit up a few spots in a row without going overboard.

Technically Côte-St-Luc. A deep dark secret Mile Endos don’t want you to know is that the wood fired Montreal bagel exists outside St-Viateur and Fairmount. Ville-Emard Bagel serves its Sud Ouest community and MTL Bagel satisfies the discerning anglo enclaves in the west part of town. If you’ve ever complained about how skinny Montreal bagels are, this place does them a tad thicker without getting into exaggerated NY or TO bread bomb territory. They also commit the heretical act of serving breakfast and lunch sandwiches, but truth be told, nothing beats their bagel matin: egg, bacon and a slice of cheese between a freshly hand-rolled sesame. 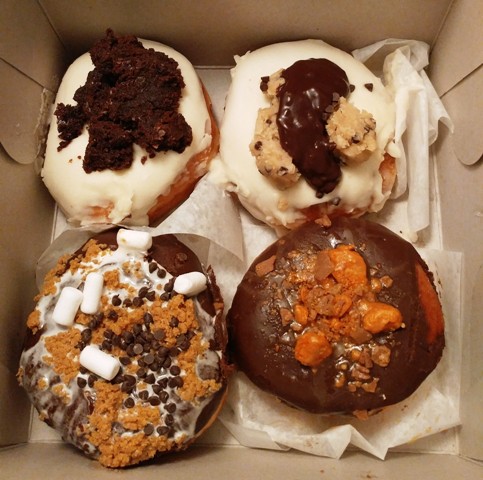 This little pink shop of confectionary wonders serves up an endless variety of desserts considering the small size of the place. They’re known primarily for their ornate cupcakes, topped with sky-high swirled icing and treats. Don’t sleep on their fresh donuts, though, which have an authentic dough consistency inside and come in tasty variations like maple bacon. There’s almost no point in going over the different toppings, because there always seems to be something new every time I pop in, so play it by ear and just know you’ll leave in a sugar rush. In the summer, cool off with their Blizzard equivalent, which also comes in every flavour imaginable. If you’ve got kids or are young at heart, they also know their way around a visually pleasing birthday cake. (They were working on a Boston Cream cake when I walked in last time.)

Simply put, THE reason to come out here. Jian bing guo zi is a Chinese street food staple served fast and hot, and here you’ll find the real deal in all its handheld glory. The only bit of localization is a few interesting filling choices, like jerk beef and fried chicken. The handmade dumplings are generously portioned and worth skipping Chinatown for. As delicious as the dumplings are, don’t miss out on the headlining crepe, a filling mix of crunchy and soft with a spicy kick and loads of meat inside. The owner even taught me how to properly boil their takeout dumplings at home: instead of lowering the heat, add a glass of cold water. Do that three times and you’ll get a warm dumpling that doesn’t fall apart. 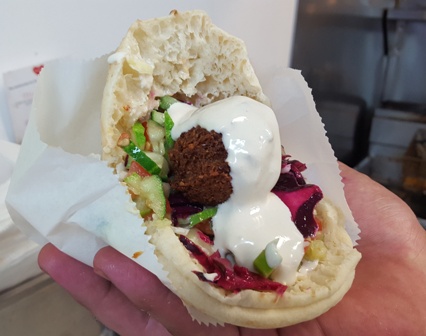 Urban highways fuck up neighbourhoods, and there’s no better example around here than the Ville St-Pierre area that time forgot because highway 20 blocked their shine. It’s hard to access and you might wonder why you’d want to go there willingly, but for Falafel St. Jacques, I’d walk through a million construction dust clouds. The place gets a lot of media attention because it’s a successful partnership between an Israeli and a Palestinian, but the food is just as much of a headline. It’s all vegetarian, including their General Tao “chicken,” which I suppose is made from mushrooms but you wouldn’t know it if no one told you. Compared with the million other pita spots around town, this one is next level, with fresher toppings and much healthier sides (aka in-house salads) to choose from. A dollop of their baba ganoush is a must. A well-ordered plate at Falafel St. Jacques should look like a rainbow of love, with ample whites, purples and greens. 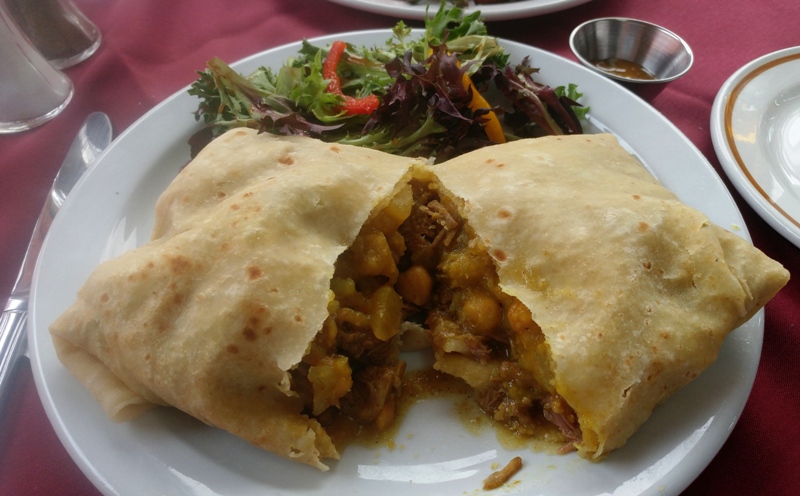 When this place first popped up, sans signage, in the standalone building once occupied by a rundown Georges le Roi du Sous-Marin, I thought squatters had taken over. Thankfully, it was just a hasty and unglamorous transition into Greenz, which offers delicious belly-busting West Indian home-cooked meals in a neighbourhood that demands authenticity. Even Cult MTL resto critic J.P. Karwacki seemed impressed with our finger food apps: light and tasty accras and sweet festivals. For mains they’ve got simple and effective rotis and jerk chicken with salad on the side. The goat roti especially was the size of a football and the thin outer casing somehow managed to keep the hot meat and potato filling from bursting out. There was no peanut punch on this day but typically they have it. ■